Co-operative of the Year winners announced

The winners of the 2018 Co-operative of the Year awards were announced in London on 23 June, as part of the sector’s annual Co-operative Congress.

The Breakthrough Co-operative of the Year Award (for co-ops with a turnover of up to £1m) was won by The Service, a London-based production company that brings together like-minded production creatives with a love for social impact, the arts and creative collaboration. Their film, Amina’s Story, was nominated for a One World Media film award and the organisation has also been nominated for a Charity Film Award 2018 for its Miscarriage Association film.

Louise Stevens, creative director of The Service said this was the first award they have won that “recognises our work as a co-op, as well as our creative approach to doing businesses”

“We are totally thrilled by this and incredibly proud to be a part of the co-operative movement,” she added.

Inspiring Co-operative of the Year (for co-ops with a turnover of between £1m and £30m) was awarded to the Foster Care Co-operative (FCC) – the only not-for-profit co-operative operating in foster care in the UK.

FCC ploughs surplus income into more training and support for carers, and is participating in university-led research looking at what barriers potentially stop disabled people from becoming foster carers. FCC also publishes monthly e-safety articles to help keep young people safe online, and has developed an interactive section on their website where the young people they support can safely log on and take part in competitions, upload artwork, become a ‘guest reporter’ and contact a designated staff member (‘KidzRep’) should they need someone to talk to.

FCC executive director, Ian Brazier, said. “We are delighted that the hard work, care and commitment from the foster carers, children and staff have been recognised through the award for most Inspiring Co-op.  It is a testament to their dedication in ensuring better outcomes for children in need of care whilst keeping values based on Integrity, Ethics, Quality and Co-operation.” 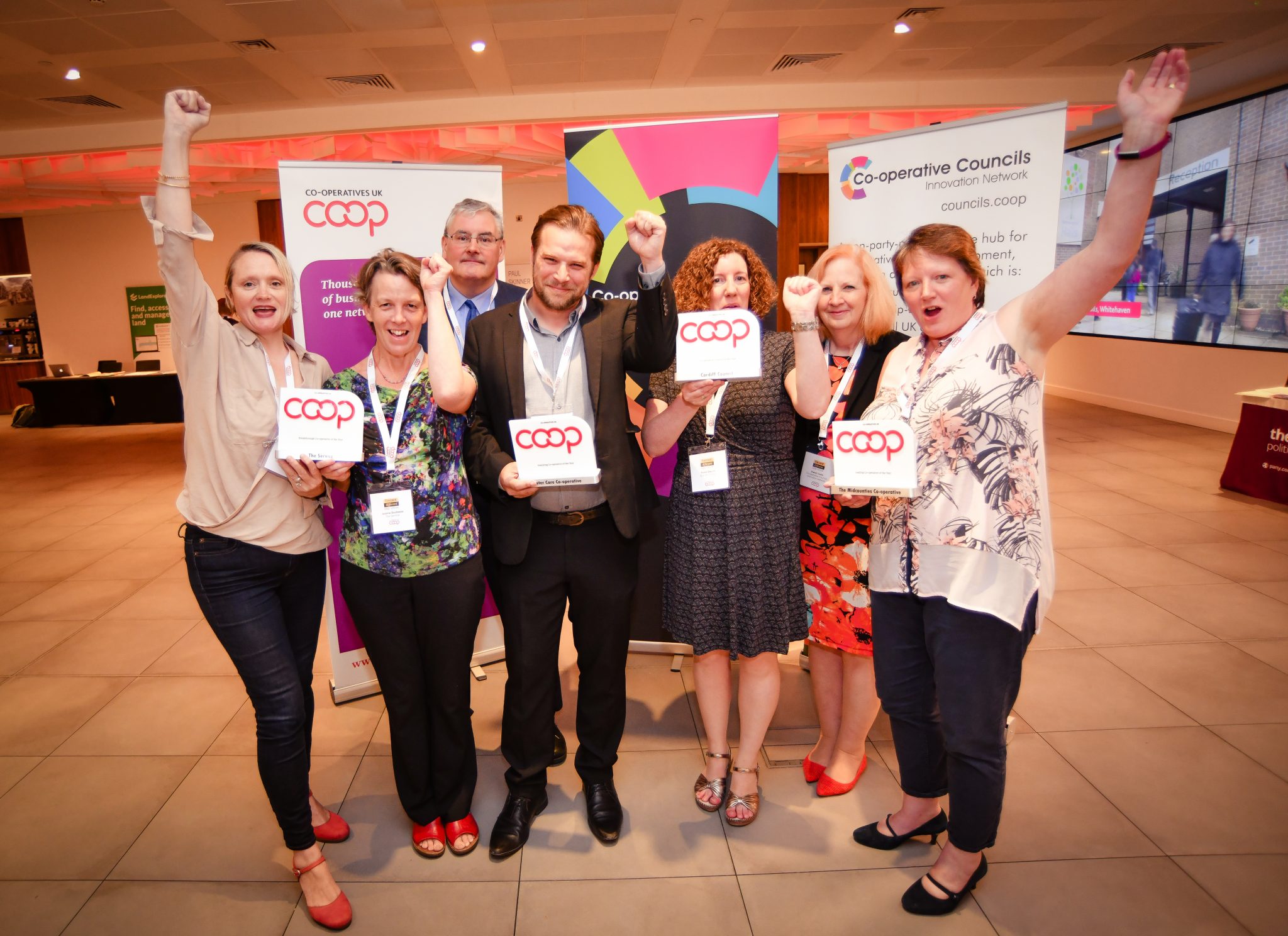 Midcounties Co-operative, the largest independent co-operative in the UK, received the Leading Co-operative of the Year award (for co-ops with a turnover above £30m).

The society has a turnover of £1.5bn and employs over 8,400 staff working in Food Retail, Post Office, Travel, Energy, Healthcare, Flexible Benefits, Funerals and Childcare.

To help build strong local communities Midcounties has created 20 Regional Communities which in 2017/18 provided 36,000 colleague volunteering hours and distributed £260,000 to over 500 good causes. During the past year, it has also engaged with over 21,000 members, raised over £150,000 for local charity partners and worked with over 9,000 young people at 50 partner schools. In addition it has contributed over 73,000 products to Foodbanks, providing meals to over a 1,000 families in need.

“As a member owned Society this award is particularly important to us because it was voted for by our members,” said Ben Reid, Midcounties Group CEO. “We have been previously voted Co-operative of the Year twice in 2012 and 2015, so I want to say a particularly big thank to everyone who helped us achieve the hat-trick in 2018”.

The new award for 2018, Co-operative Council of the Year, was picked up by Cardiff Council, which has used co-operative approaches to inform and shape responses to challenges in Wales.

The council works on the premise that “success requires a broad partnership”, allowing and encouraging everyone to contribute. This ethos has been applied to a range of delivery models to address city challenges, including education, local environmental and recycling initiatives, music and its own employee engagement. The Council won the Best Employee Engagement Initiative for ‘Employee Voice’ at the Wales People Management Awards and was named Living Wage for Wales Champion 2017-18.

“I am delighted the Council has been recognised for the great co-operative work going on across the authority and in the city,” said Cllr Peter Bradbury, cabinet member for culture and leisure at Cardiff Council. We know that we don’t have a monopoly on good ideas so by working with partners – whether it’s residents or local businesses, and encouraging everyone to contribute, we can focus our joint energies and creativities on a particular issue.”

Presenting the awards were Nick Matthews, chair of Co-operatives UK, and Cllr Sharon Taylor, chair of CCIN and leader of Stevenage Council.

“These Awards highlight what can be achieved when people work together to build a better world and it is a privilege for CCIN to continue our association with Co-operatives UK in such an exciting way,” said Ms Taylor.

She described some of the work of CCIN member councils, such as community wealth building in Preston through the power of public spending, a co-operative neighbourhood management review taking place in York, and the work of her own council to tackle domestic abuse, “which is saving lives every day”.

“The time for co-operatives is now,” she added. “We make the difference.”