Why it’s time to radically rethink the business school

Martin Parker from the University of Bristol suggests that if we want a co-operative economy, then business education needs to change

Virtually every university in the UK has a business school, and they collectively teach around one in seven university students. It’s a gigantic and very profitable industry, and one that has grown as state funding of universities has declined. But these are not neutral purveyors of teaching and research about how to organise, because the b-school sells a very particular form of knowledge. It teaches about capitalism, and largely ignores any alternatives.

The business school is a creature of the market. In order to stand a better chance of selling ideas, it is a good idea to teach things that flatter those who want to become wealthy and powerful. And this is exactly what the b-school does by suggesting that decision making by management and the unequal distribution of rewards are inevitable. Students are taught that these are the result of a combination of economic laws and human nature. Leaders must be amply compensated to compensate them for the burdens that they shoulder while well behaved employees admire them from a distance.

The problem that the business school should be addressing is governance. As Plato says in The Republic, we need to be careful how we educate those who might lead us. If we educate our graduates in the inevitability of market managerialism, it is hardly surprising that we end up with justifications for massive salaries and hierarchical decision making. That is the message that the business curriculum provides. The abstraction called ‘the market’ is assumed to be the hidden hand that no-one can buck, and it is ‘the market’ that determines that some get paid more than others.

The key to the problem of business education is in the name. Words like ‘business’, or ‘management’, or ‘commerce’ refer us to some particular forms of organization. Mostly large, mostly private sector, usually the limited company. These quite specific organisational forms are then assumed to provide general models for all sorts of other organisations, which is a bit like assuming that studying whales can tell us about herring. Because the fact is that our world is populated by all sorts of organisations, and they all present different solutions to the problem of governance. That’s why we need a School for Organizing, not for management.

If we start looking, there are lots of forms of organisation that an alternative school might look at in order to learn lessons. This means that the curriculum would not ignore organisations on a different scale, or in different cultures, or from different times. Organisation – as a verb – simply refers to the patterns that humans produce in order to get things done. It could include families, co-operatives, local markets, kinship systems, groups, networks, communes, tribes, partnerships, local exchange trading systems, hierarchies, democracies, city-states, councils, teams, bureaucracies, trusts, communities, collectives, enterprises, professions, guilds, lineages, trade unions, states, clubs, cultures, occupations, societies, matriarchies, solidarities, associations, villages, sects, and utopias. Oh, and private sector limited companies too.

Related: Can a co-op university help us rethink community?

We wouldn’t trust a medical school that only studied certain diseases, or restricted its research to people who had a certain skin colour. We wouldn’t be impressed if a teacher of architecture ignored all buildings that weren’t office blocks, or if a biologist decided to ignore life forms that weren’t antelopes or zebras. This is what the business school is doing with organisations. It is implicitly condemning all other organisational forms as old fashioned or niche, and assuming that market managerialism is the only and one best way. Before the crash, this was an assumption that might have been credible to many people. Nowadays, we might instead suggest that it was the people with degrees in management, finance and accounting who got us into the mess that we are in, and the business school should not avoid its culpability.

Many business schools and their professional associations have been busily trying to avoid this unpleasant conclusion. Apart from wriggling a lot about cause and effect, their only suggestions for reform appear to involve compulsory modules on corporate social responsibility, and perhaps making some noises about diversity and sustainability. This is tinkering, the equivalent of the biologist agreeing to add rhinos and hippos to the curriculum. Their fear of change is perfectly comprehensible, but if the business school is to rescue its tarnished image, it needs more than a bit of public relations. It needs to become a proper subject, and change its name. 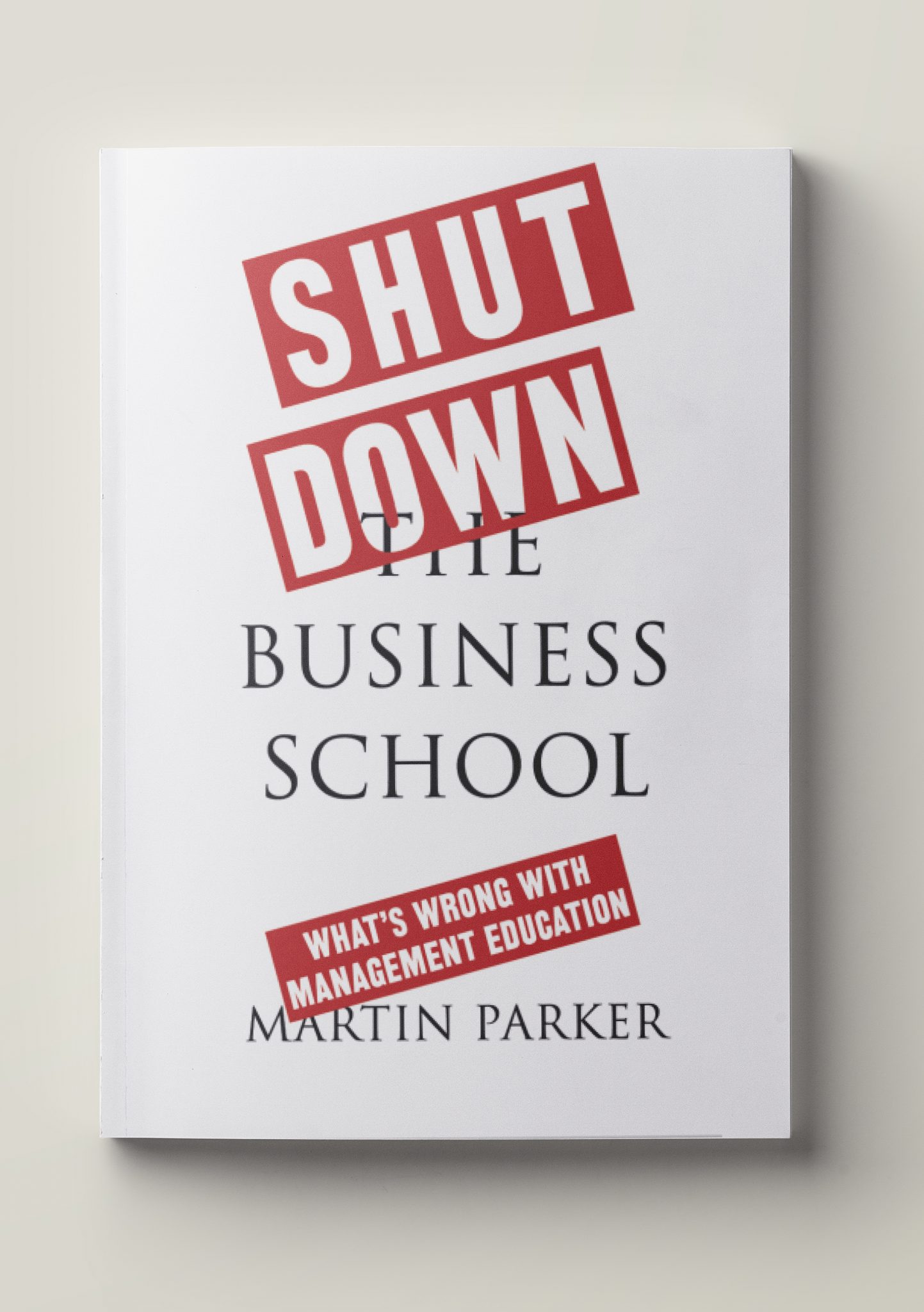 Because we do need somewhere questions of organisation are studied and taught. Whether small worker co-op or multinational company, issues of how co-ordination and control can be achieved are central to our lives. So too are the political issues that are necessarily part of any patterning of power. Plato knew that leaders needed to be trained not to become tyrants. So perhaps it’s time for these schools to encourage modesty and historical understanding in their graduates. If this means they study how local currencies are organised, and the skills required in running a mutual, then so much the better. At least the students will understand that there are alternatives, and the School of Organising can become more than just a place for teaching capitalism.

Martin Parker is Professor of Organisation Studies at Bristol University. His research and writing is an attempt to widen the scope of what is usually part of business and management studies, whether in terms of particular sorts of organisations (the circus, the worker co-op, Apollo space programme etc) or ways of representing organising (in art, cartoons, films etc).

How do co-op retailers rate on the gender pay gap?
Next
Subscribe to the newsletter