By Vijay Mehta (New Internationalist Publications, 2016) Peace Beyond Borders tells the story of co-operation from a European Union (EU) perspective. Published in 2016, the book examines the... 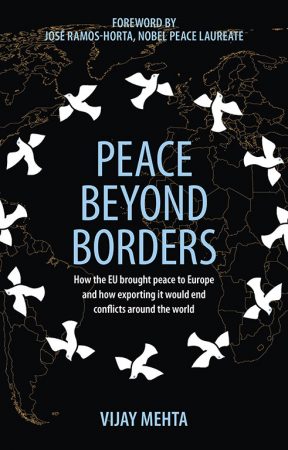 Peace Beyond Borders tells the story of co-operation from a European Union (EU) perspective.

Published in 2016, the book examines the role of the EU in driving co-operation across borders.

Author Vijay Mehta, a leading peace and human rights activist, makes the case for the EU, which, he says, has helped promote peace across the region. He also looks at the possibility of having similar unions across other continents as a means to export peace.

The book explores the idea of European integration and how this process and the increased interdependency within the member states has eliminated the need for conflict. Tracing back the history of Europe, Mr Meht argues that the EU has helped transform the most war-prone continent into the most peaceful one.

While the concept of complex interdependence between states as a means to secure peace dates back to the neoliberal school of thought and international relations thinkers like Robert Keohane and Joseph Nye, the book’s approach is from the point of view of an activist.

Vijay Mehta chairs Uniting for Peace and is a founding trustee of charity Fortune Forum.