Co-operatives UK and the EOA are calling on the UK government to invest £2m to support employee owned businesses.

By Anca Voinea
The campaign was launched on 22 July

A new campaign by Co-operatives UK and the Employee Ownership Association (EOA) is calling on the UK government to invest £2m in the upcoming spending review to support a voluntary expansion of employee and worker-owned businesses.

Due to be published this autumn, the spending review will cover the 2020-2021 period, setting detailed departmental allocations. Co-operatives UK and EOA believe that increasing employee and worker ownership can help government achieve its objectives for a more productive, inclusive and balanced economy, supporting its own aims in the Good Work Plan and playing a key role in the Industrial Strategy.

The #1MillionOwners campaign calls for £2.17m to be allocated over the next three years, with an ambition to create one million worker and employee owners by 2030. Through the scheme, five local enterprise partnerships (LEPs) would work to address the biggest barriers to employee and worker ownership, such as raising awareness, practical understanding and advice amongst entrepreneurs, business owners, workers and those who advise them.

In Scotland the government is investing £500,000, through Scottish Enterprise, to support employee ownership and tackle these barriers. The campaign highlights how an independent evaluation for Co-operative Development Scotland found a tenfold return on investment in gross value added for every pound invested in on-the-ground support to grow employee and worker ownership. The Scottish government aims to increase the number of employee and worker owned businesses from 100 to 500 by 2030. The campaign suggests that the UK government set a similar target to that of the Scottish Government to increase the number of employee and worker-owned businesses.

Related: Aardman, the home of Wallace and Gromit, transfers control to workers

“The UK’s best employee owned businesses and leading worker co-ops can be the answer to a more inclusive economy at a time of great economic uncertainty. We’re urging Westminster government to match the Scottish Government’s ambition for a fivefold increase in the number of employee and worker owned businesses by 2030.” 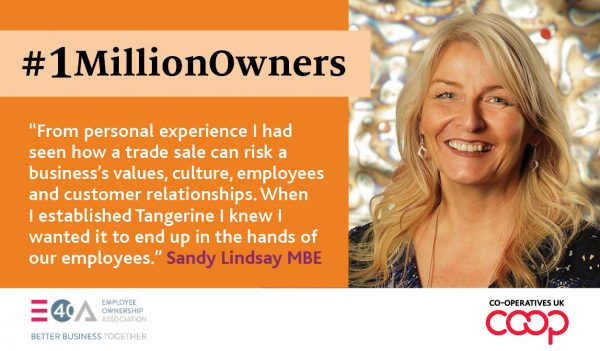 Deb Oxley OBE, chief executive of the EOA said: “Now is the time for UK government to invest in creating more businesses that have a proven record of accomplishing and sustaining higher productivity, greater economic resilience and having a wider impact on the regions they operate in.

“Not one dissenting voice has followed recent high profile employee ownership transitions such as Riverford Organic, Aardman and Richer Sounds. In fact, there was unilateral political support as well as a positive endorsement by commentators in tabloids and broadsheets. We have great examples from across the UK of employee and worker owned businesses of doing well while doing good – it is very clear the UK would benefit from having more of them.”

Also backing the campaign is Julian Richer, founder of Richer Sounds, who recently handed over control of the business to its staff by placing 60% of the company into an Employee Ownership Trust (EOT).

He said: “To me, the decision to sell the company to my colleagues was an obvious one. Nobody knew my business better than the people in it and we’d created a culture together. To sell to the highest bidder would have created wealth for one or two people, instead, using the EOT model we will sustain the value we create for the individual, the business and the economy for the longer term.”

One of the largest worker co-ops in the UK, Suma is also supporting the campaign. Ross Hodgson, Suma member said: “Worker ownership has been the key to our success over the last 40 years. All our members are paid the same and are given an equal say in how the business is run, with each carrying out a range of jobs across our co-op. We support the campaign to create and support more worker owners and urge the government to commit funding to grow the sector.”