Back to the roots: A new group of Rochdale Pioneers set up shop to answer austerity

'I’ve been in situation where I couldn't afford to eat, and now I’m giving a bit of help back, when people are struggling'

By Miles Hadfield
Volunteers Kim, Sandra and Andy at the Pioneers Pantry

With austerity bringing deeper poverty to UK towns and cities, the co-op movement is thinking of new ways to bring food to those who need it.

In Rochdale – where the modern co-op movement was born to meet similar social needs – a ‘pop-in’ shop has been launched at the Rochdale Pioneers Museum, offering food and other essentials to local people living in poverty.

The Pioneer Pantry is a member-owned, volunteer-run co-op where local people in need can pay £1 to join and take home a bag of food per week, paying what they can afford in subsequent weeks. This is supplemented by once-monthly Friday night dinners, offering cooked meals.

A colour-coded system allows fair distribution of the donated food and other items – and the shop will also stock free sanitary packs, provided by charity The Crimson Wave.

Cat Jessop, community engagement officer at Rochdale Pioneers Museum, says she was inspired to take action on poverty after reading press reports in 2017 about parents going hungry to feed their children over the school holidays.

“I was aware of this anyway,” she says. “There is a lot of poverty in Rochdale – it’s apparent if you walk down the street.”

The museum received grants from various organisations to set up a family meal service to help those in poverty. “That grew and grew,” says Cat. “It was very popular but that meant it became a victim of its success – it got very crowded, and we didn’t want to say no to people.”

Related: How can co-op retailers face the crisis on the high street?

Instead, the team at the museum decided to set up the Pioneer Pantry – a democratic, member-owned community, volunteer-run food store.

“It’s based on the dignity of the users,” says Cat. “People don’t come to us through referral – it’s not a food bank, it’s a shop. And it’s based on the ideals of the Rochdale Pioneers – honest prices, offering good honest food to people in Rochdale.”

The venture has met with enthusiastic response, with extensive local media coverage and enthusiastic support in the town. 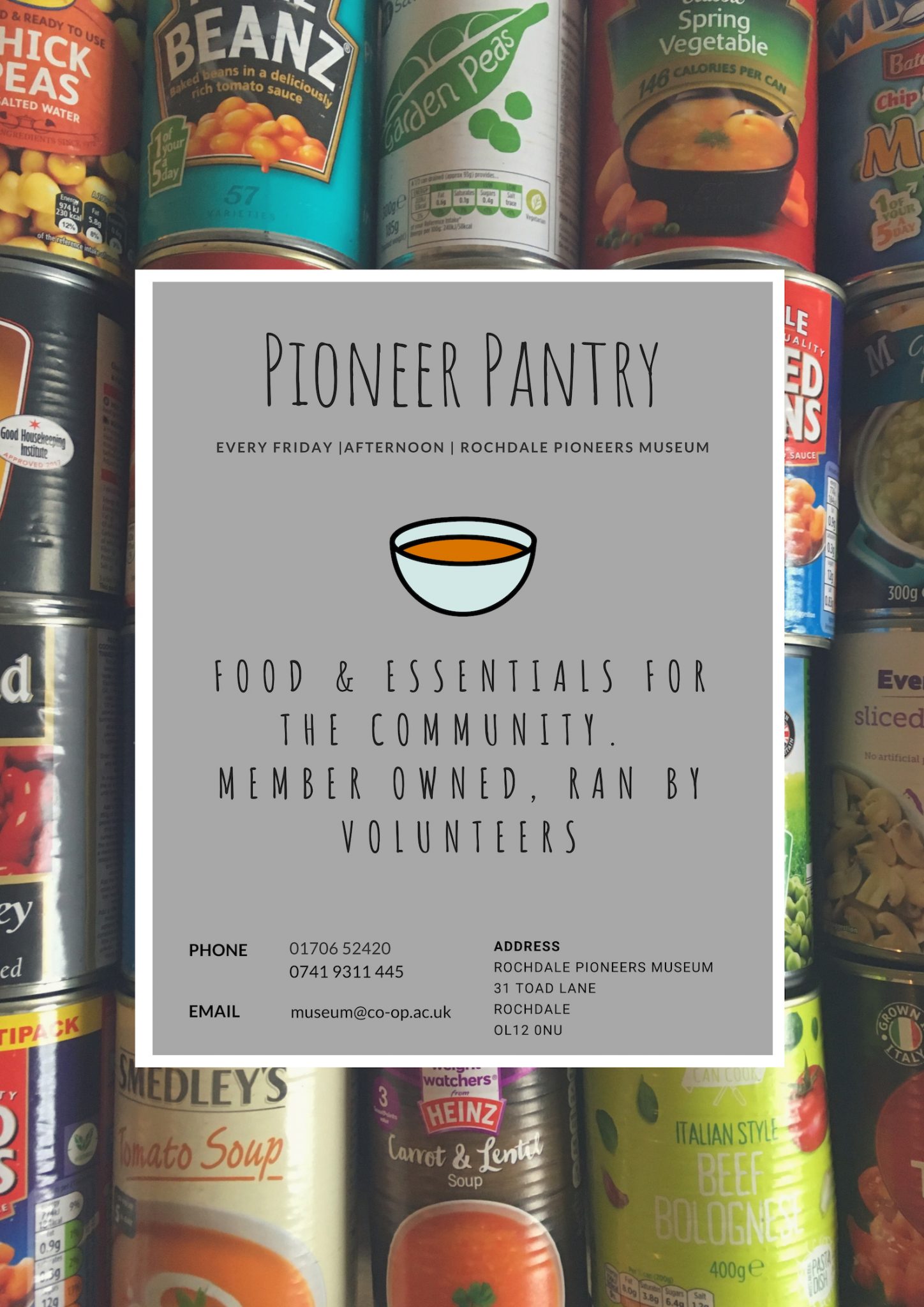 “We have a food bank in Rochdale,” says Cat, “but they are very supportive of what we are doing because they are a crisis point and can’t cater for everyone. Rochdale Council supports us, and Rochdale Boroughwide Housing.

“We’re supported by the Coop Group’s food share scheme, with backing by three local stores – we receive their best-before food so we can have fresh food in to sell. It’s really important that food is not wasted and thrown away.”

This new grassroots retail model is already proving so successful, the team is looking to expand into other activities. Members vote on how profits are redistributed and for the first quarter have chosen a community gardening scheme to grow food. “The whole project put together with volunteers here now,” says Cat, “based on what they think is good practice.”

Two of those volunteers, Andrew and Charity, spoke to the News about their experience at the Pantry.

“I was homeless,” says Andrew, “and someone said go to course at Rochdale Pioneers Musuem. I started doing a cookery course, which lasted a few months. After that they asked if I’d like to join the the Friday Food scheme, then they asked me to voluteer at pantry.

“I’ve been in situation where I couldn’t afford to eat, and now I’m giving a bit of help back, when people are struggling. That makes me feel better as well.

“It’s a very positive idea and people should open things like this all over the place. It really helps people out, and it only takes one person to get it started.”

Related: How do we make co-op deserts bloom?

Charity says she got involved in the scheme when she was struggling with debt; if she paid for gas for her home it meant there was no money to feed her children.

“There’s only a maximum of what food banks can give,” she adds. “For months after month I was struggling – but every Friday at the Pioneers Museum, you could come and get food for the family.

“They helped me through the toughest time of my life and when the opportunity came up I jumped at the change  to give a bit back.

She adds: “Going through that tough time, I felt isolated and depressed on my own. Now it’s rewarding for me that I can come out and help people make changes. When people come in and they have food, it puts a smile on my face as well. I can go out and know I’m making something better.”