Working Together: a final update from the Co-operative Heritage Trust

What are the final outcomes of the project?

In 2017 the Co-operative Heritage Trust launched the Working Together project, with the aim of looking for, recording and preserving the heritage of the worker co-operative movement of the 1970s-1990s. As the project draws to a close, archivist Philippa Lewis gives us a final update…

The Working Together project has been a year-long initiative that aimed to locate, record and preserve the heritage of the UK worker co-operative movement of the 1970s-1990s. It was funded by the Heritage Lottery Fund and donations from worker co-operatives and co-op support agencies. The project is coming to a close at the end of September. What did we learn along the way? 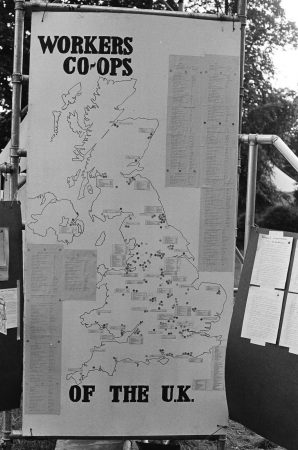 Scoping and collating material
The first stage of the project involved finding out what material existed – and where it was. Many items were still held by individuals, often packed away, forgotten, in cupboards or attics.

In total, we contacted over 300 co-operatives or individuals, many of whom held material relating to workers’ co-ops that they were keen to deposit with us at the National Co-operative Archive.

Oral histories
As well as collecting physical items – like banners, bags, minute and leaflets – we spoke with some of the people involved in worker co-ops during the 70s, 80s and 90s, which allowed more personal recollections to be recorded.

In total, staff and volunteers undertook 26 interviews across the UK, with people associated with, for example, Unicorn, the 8th Day and Delta-T Devices.

Making our findings accessible
The aim of the project from the outset was not just to collect material, but also make it accessible to as large an audience as possible.

However, it was also recognised that, as a national project, it was important that material was also made accessible online to be accessed by individuals remotely. One way we done this is to display workers’ co-operative images on a dedicated Flickr account, which allows images to be uploaded and shared, with others able to tag and engage with the images.

To make the oral histories more accessible, full transcripts and summaries of the interviews have been created (many of which were completed by the project volunteers). These have been uploaded with the recordings to the National Co-operative Archive website.

A travelling exhibition has also been developed to showcase some of the findings of the project. This has been displayed at various venues including Manchester Central Library and Warwick Modern Records Centre, and is now at the Rochdale Pioneers Museum.

Into the future
Although the project itself is coming to an end, the material and lessons learned from the project will live on in the wider collections of the National Co-operative Archive. Another long-term aim of the project is to ensure that workers’ co-operative material continues to be deposited at the archive.

This will ensure that the heritage of this key part of the co-operative movement will be preserved and made accessible to current and future researchers alike.

The past informs the present: The co-operative movement and anti-slavery
Previous