What role should co-ops play in the financial sector post Brexit?

Co-op models can help reform the financial sector, said Labour/Co-op MP Jonathan Reynolds as he called for co-operatives to be “at the heart” of the UK’s economic recovery....

Co-op models can help reform the financial sector, said Labour/Co-op MP Jonathan Reynolds as he called for co-operatives to be “at the heart” of the UK’s economic recovery.

The shadow economic secretary was speaking at the Co-operative Economy conference in London, an event organised by the Co-operative Party. He said the financial sector would be among those most exposed by Brexit, and argued that its firms based in the UK should retain the ability to operate freely across the EU, and to recruit from around the world.

But, he added, the financial sector needed reform, particularly in terms of competition, inclusion and social justice.

“Evidence suggests co-ops are more responsible than other businesses, and worker-owned companies have a clear advantage,” he said.

Mr Reynolds thinks co-ops can help address the productivity gap, and asked for a “supportive regulatory and legislative framework to help co-operatives thrive”.

He gave the example of the Mutual Guarantee Societies Bill, which would enable businesses to come together through a co-op and access finance, providing security for one another and a guarantee for the lender.

The UK’s big four banks collectively supply more than 77% of the personal current account market in the UK and 85% of business accounts. However, 1.5m people are without a bank account.

“We need to learn from alternative models to see how we can address this,” said Mr Reynolds, giving the example of German co-operative banks, which, he said provided “diversity, stability and lending” while their primary goals was not always to maximise it.

He said he was committed to exploring how to stimulate a new generation of building societies. He also mentioned a private members bill tabled by Chris Evans in the last parliament, which aimed to introduce a “social performance rating” for banks.

Another idea is to provide impartial financial education to children as part of the national curriculum. Mr Reynolds is also looking at the role of credit unions and anchor institutions in developing a co-operative economy. 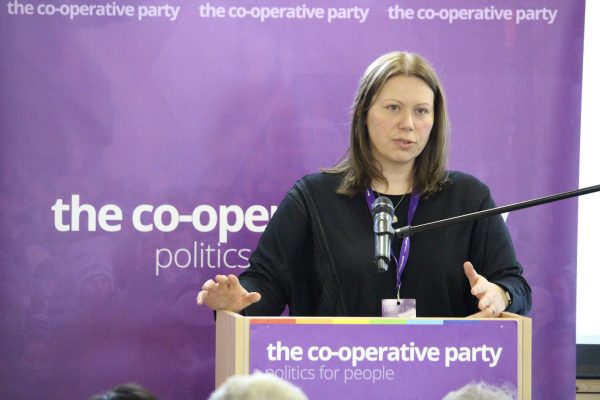 Sian Williams, director of the Financial Health Exchange at Toynbee Hall, joined the discussion and talked about the work of the East London charity, which works with deprived communities, providing free advice and support.

“Financial education is not just about how things work but what power you have, skilling people up to manage and control the environment in which they find themselves,” she said.

To achieve a greater impact Ms Williams suggested working with big banks to “figure out what they are willing to pay and what change to bring.”

She said credit unions have come under pressure to be sustainable, which led them into going to recollect debt. She thinks the conversation needs to shift to good practice.

According to Damon Gibbons, director of the Centre for Responsible Credit, the key problem with the UK’s financial system is an economy built on consumer and household debt.

“That’s the problem, it feeds itself and gets bigger”, he told delegates.

“We need to control the price of credit”, he added, praising the campaign led by Labour/Co-op MP Stella Creasy and the Co-op Party to introduce a cap on payday lenders.

“That needs to be extended. It means that capital can no longer flow easily and it might have to be directed into much more productive areas,” he said. “We need to take debt problems off people’s hands and so they can invest.”

Possible solutions include rent support facilities and flexibility over tax payments, he said.