How a northern town helped pioneer the workers co-op

Historian Andrew Bibby’s latest book, All Our Own Work, takes a look at one of the less-remembered chapters of the co-operative story. While the Rochdale Pioneers were leading the way...

Historian Andrew Bibby’s latest book, All Our Own Work, takes a look at one of the less-remembered chapters of the co-operative story. While the Rochdale Pioneers were leading the way with the retail movement, The Hebden Bridge Fustian Manufacturing Society was an early example of the workers co-op – and the challenges and dilemmas it faced are still relevant today …

It was in the editorial column of Co-operative News that the challenge was thrown down: the story of the Rochdale Pioneers had often been told, the editorial said, and it was high time for another co-operative to get some attention.

The article admittedly was not penned by our current editor. It appeared in the publication on July 9th 1881, and the writer was the leading co-operator and propagandist of his day, Edward Owen Greening, later to oversee the successful co-operative festivals held at Crystal Palace.

Greening, who lived in London, had recently visited Hebden Bridge to see the fustian mill at first hand. For him, what was happening at that mill was an exemplary case study of how workers could successfully run manufacturing businesses as co-operatives.

“For a co-operator not to know Hebden Bridge is to argue himself unknown,” he told his Co-operative News readers.

Greening also enthusiastically suggested that a statue should be erected in Hebden Bridge to the co-operative’s founder and leading light, Joseph Greenwood. It never, of course, got put up. Despite that plea in Co-operative News the history of the Hebden Bridge co-operative did not see the light of day either.

Or at least, not for over 130 years. The launch, during the Co-operative Congress weekend later this month, of the book All Our Own Work represents my very belated attempt to offer to readers something of what Greening may have had in mind.

Greening died in 1923, Joseph Greenwood a year later and it is almost a century since the Hebden Bridge Fustian Manufacturing Society last filed its annual return. And yet, I’d want to argue, what happened at Hebden Bridge and the other pioneering early productive co-operatives in the later 19th Century is still very relevant to us.

Indeed, at a time when the British co-operative movement is exploring its future role and relevance, it is valuable to be reminded of those early experiments in co-operative business which did not follow the usual route of the locally based grocery store.

The terminology has changed – what Joseph Greenwood and his work colleagues knew as productive co-operatives, we’d describe as workers’ co-operative. But the challenges and the dilemmas faced by Greenwood are all too familiar to co-operators today.

Can workable business models be found to provide an alternative to shareholder capitalism? How do you build a business with different business ethics which can survive in a hostile competitive world? Where do you find the capital you need, and what is a fair deal for investors? What responsibilities do businesses have to their communities? Is employee participation simply a sop?

The early division in British co-operation between ‘distributive’ and ‘productive’ co-operation – still to an extent a feature today – was never part of the original thinking.

The Rochdale Pioneers’ aims in 1844, for example, included “the establishment of a store for the sale of provisions, clothing etc” and also “the manufacture of such articles as the society may determine upon, for the employment of such members as may be without employment” (incidentally, housing provision was a further aim).

But in practice the movement found it much easier to establish grocery stores than to run manufacturing co-operatives. By the time the Hebden Bridge fustian society was established in 1870, there had already been several high-profile failures of productive societies.

The Hebden Bridge Fustian Manufacturing Society proved that productive co-operation could be made to work, however. It traded for almost half a century, employed at its peak over 300 workers (more women than men) and made profits every year it traded.

It attracted attention: a host of visitors made the journey to the co-op’s Nutclough Mill, among them stalwarts of the movement such as George Jacob Holyoake and Edward Vansittart Neale, national figures such as Beatrice Webb and Tom Mann, and even a future Archbishop of Canterbury, Cosmo Gordon Lang.

Lang later reminisced about “the heroic little company which was for so many years a witness to all that was truest and best in co-operation”.

The co-operators of Hebden Bridge in turn contributed to the development of British co-operation. Joseph Greenwood served on the Co-operative Union’s Central Board for more than 30 years and was also the International Co-operative Alliance’s treasurer in the ICA’s very early days.

Jesse Gray, who was appointed by Greenwood as the co-operative’s secretary, went on to lead the movement as the general secretary of the Co-operative Union.

Robert Halstead, employed as a four-loom weaver at the Nutclough Mill, would help to found the Workers’ Educational Association.

And the women of Hebden Bridge, including women from the fustian co-operative, set up the first branch of the Women’s Co-operative Guild almost as soon as it was launched, in 1883.

The Hebden Bridge Fustian Manufacturing Society also found itself, willy-nilly, at the heart of what became the big doctrinal dispute of later 19th Century co-operation, an argument which nearly tore the movement apart.

The question hinged on what should be done with the profits generated by co-operative manufacturing. Joseph Greenwood had been adamant from the start that the workers should share at least some of the fruits of their labour as a ‘bonus to labour’.

In practice, the profits in Hebden Bridge were shared between the investors (who, because of the early need for capital in the business, managed to get far more than their fair share), the co-operative societies who bought fustian clothing manufactured at the mill and the workers.

But the idea of a ‘bonus to labour’ was controversial, with the Co-operative Wholesale Society abolishing it for its own factories after a very short early period of experimentation. (The Scottish CWS took a different path).

It was a CWS representative who led an (unsuccessful) fight for the Hebden Bridge society to drop bonus to labour, much to Greenwood’s disgust. His own motivation, he made clear, was to build a business which gave the workers power over their working lives.

“The first object of the Hebden Bridge Society was the redemption of the working people,” he said on one occasion, adding, just in case there was any confusion on this point, “and not simply to serve distributive societies”.

The arguments over bonus to labour, which moved on later to the related issues of profit-sharing and ‘co-partnership’, pitted men such as Holyoake, Neale and Greening against other leading co-operators, such as the CWS’s great leader JTW Mitchell.

When, well into the 20th Century, the heat from the row dissipated there was a natural desire to move on. The focus became almost exclusively on the distributive movement and on the merged CWS/Scottish CWS; the successful productive co-ops, which had almost all taken the side of profit-sharing and co-partnership, were to a large extent written out of the story.

When, in the late 20th Century, a new generation of workers’ co-ops became established they did so with almost no knowledge of the experience of their antecedents.

Now, perhaps, we can take a more rounded approach to those early days, celebrating not only the success of distributive co-operation and in particular the remarkable achievement which was the CWS, but the experiments in industrial democracy which were pioneered by the productive co-operators. 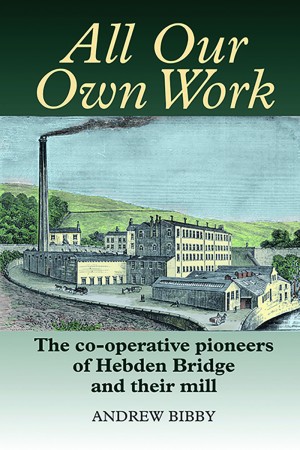 This would be what Jesse Gray would have wanted. “The aim of all co-operators ought not to be simply the accumulation of dividend, but it should go still further and enable the workers to become their own employers,” he maintained.

All Our Own Work by Andrew Bibby is published by Merlin Press. An exhibition linked to its publication opens at the Rochdale Pioneers Museum on Saturday 18 July at 1pm and continues until the autumn. Andrew has also contributed a short online presentation on the story of the Hebden Bridge co-op to the Co-operative Heritage Trust website, www.archive.coop/hive.