Europe’s largest dairy co-op, Arla Foods, has announced plans to make its operations “from cow to consumer” carbon neutral by 2050.

The co-op – owned by 10,300 farmers across the UK, Germany, Denmark, Sweden, Finland, the Netherlands, and Belgium – has also pledged to balance nitrogen and phosphorus cycles to support clean water systems, and to “be even more closely aligned with nature to further increase biodiversity across Britain’s countryside”.

Arla – which gave its entire 2018 profit to farmers hit by last year’s drought – claims the changes will show that “business growth can be achieved without environmental impact”. It says it has managed more than 40% more milk since 2005 – but has also reduced its CO2 emissions by 22% across production and packaging.

Arla Foods UK managing director Ash Amirahmadi said: “One of the greatest challenges facing us all is providing natural, nutritious food for a growing population while reducing our collective impact on the world around us.

“Arla has already shown this is possible and the new ambitions announced today will ensure Arla’s farmers, production sites and products continue to play their part in developing a sustainable world for everyone.”

While the targets are ambitious and will require radical changes across its business in the decades to come, Arla insists they are possible given the rapid pace of change in technology and ever-increasing on-farm efficiencies. 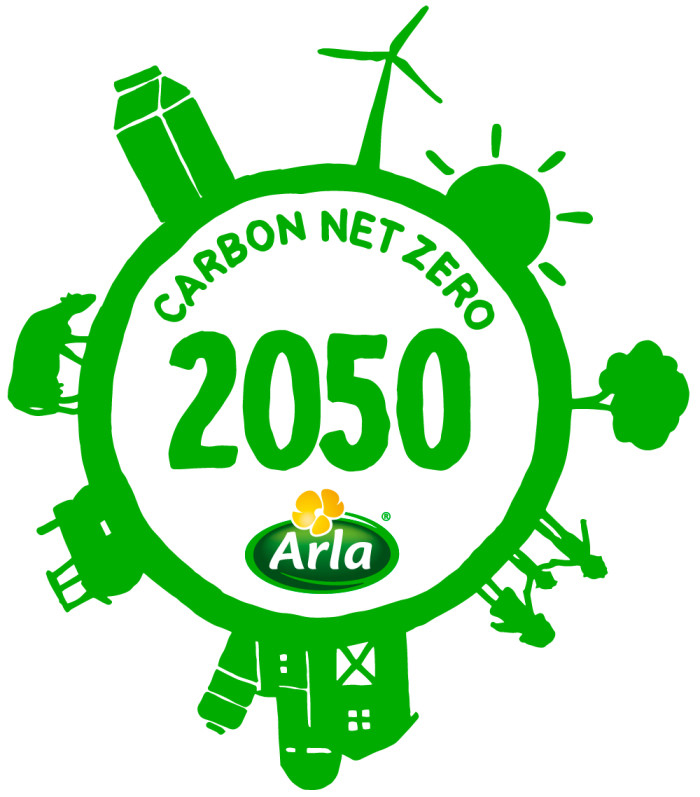 And it says it has already demonstrated best practice at sites around the UK, including the first carbon net zero milk processing facility in the world. The Aylesbury plant uses biogas produced on site and anaerobic digestion. It has created a circular economy for its operations in collaboration with Olleco and McDonald’s.

Arla is also working to eliminate food waste, entering into an agreement with FareShare to redistribute surplus products via its networks to frontline charities who prepare meals for vulnerable people. Last year, the co-op provided 424 tonnes of dairy products to FareShare, enough to make more than 1,000,000 meals for people in need.

It also points to a 48% reduction in its UK plastic carbon footprint – equivalent to 72,937 tonnes since 2005 – achieved by reducing the weight of its standard milk bottles by 25.5% and using up to 40% recycled plastic in them. It says this makes 84% of its packaging produced in the UK recyclable.

And it adds that no palm oil is used in Arla products made in the UK. The co-op stated: “Where it is required in products made outside of the UK all palm oil and palm oil products come from 100% RSPO certified growers that have been independently verified.

“The WWF cites Arla as leading the way in its buyers’ score card.”

Arla said the commitment involved “applying our co-operative principles to nature”, adding: “Being part of a co-operative means working together. Arla’s farmer owners work with the nature around them to apply the best environmental measures for the land they farm. This means while every Arla farmer works differently, they are all working for a more sustainable world.”

Related: Retail and plastic – Eroski co-op goes back to the paper bag

It says there are already actions in place to “drive sustainable change”, with a push to renewable energy seeing farms generate 61% of the electricity they use on farms. And 90% of cows owned by Arla’s UK farmer owners grazing on grass outdoors “to help absorb carbon dioxide out of the atmosphere”.

It adds that nearly 1,500 of its farms open parts of their land to public use, with farmers looking after hedgerows and more than 10,000 km of public footpaths, and leaving around 2,200 acres of land fallow for wildlife. Many farmers use renewable energy sources. Across Arla’s 10,300 farmer owners, the electricity produced on farms equals 61% of total electricity usage on farms.

Arla farmer owner Arthur Fearnall said: “Every day Arla farmers take steps to support and shape Britain’s countryside. No one feels the effects of varying weather patterns more than farmers – it has a direct impact on the animals we care for, the food we produce and the money we make.

“We’ve taken some big steps at Arla, but we can’t take our feet off the pedal. Every business and individual in every walk of life will need to think about their impact on the world in the years to come.”

The announcement met with a welcome from environmentalists. Clare Oxborrow, from Friends of the Earth, said: “It’s good to see businesses responding to the climate crisis and taking steps to cut their emissions, moving to net zero.

“It’s also positive to see Arla doing this holistically, including aiming to enhance biodiversity and improve use of resources.”

But she added: “It’s vital though that greenhouse gas savings are not made by intensifying production and pushing dairy cows to be more ‘efficient’ at the expense of their welfare.

“Overall we need a ‘less and better’ approach to meat and dairy production in the UK that brings down climate emissions, protects biodiversity, safeguards our health and animal welfare and secures farmer livelihoods.”