‘We know co-operatives are resilient and sustainable businesses and these incredible stats reinforce that view. It begs the question “why are there not more co-operatives?’”

Throughout Co-operatives Fortnight 2018, we’re sharing some of the brilliant stories from UK and international co-ops which show the #coopdifference in action: how, where and why co-operatives can make a difference to you and your communities.

The Co-op Economy 2018 report, which provides an overview of the UK’s co-operative economy, reveals that new co-ops have an 80% survival rate, compared to 44% in the case of other start-ups. While 93% of enterprises remain in existence after their first year, this drops to 76% after the second year followed by another fall to 61% after year three. By contrast, co-ops have a survival rate of 96%, 91% and 87% after the first, second and third years of existence.

Co-ops include a range of businesses, from well-known retailers such as The Co-op Group and John Lewis to farmer-owned businesses, community sports clubs and web developers.

Co-operatives UK secretary general, Ed Mayo, said: “We know co-operatives are resilient and sustainable businesses and these incredible stats reinforce that view. It begs the question ‘why are there not more co-operatives?’”

Mr Mayo thinks a bigger co-operative sector would help to grow the UK’s economy as well.

He added: “It’s no surprise there’s a prevalence of empty offices and boarded up shops in high streets across the UK’s towns and cities when more than half of all companies fail in their early years.” 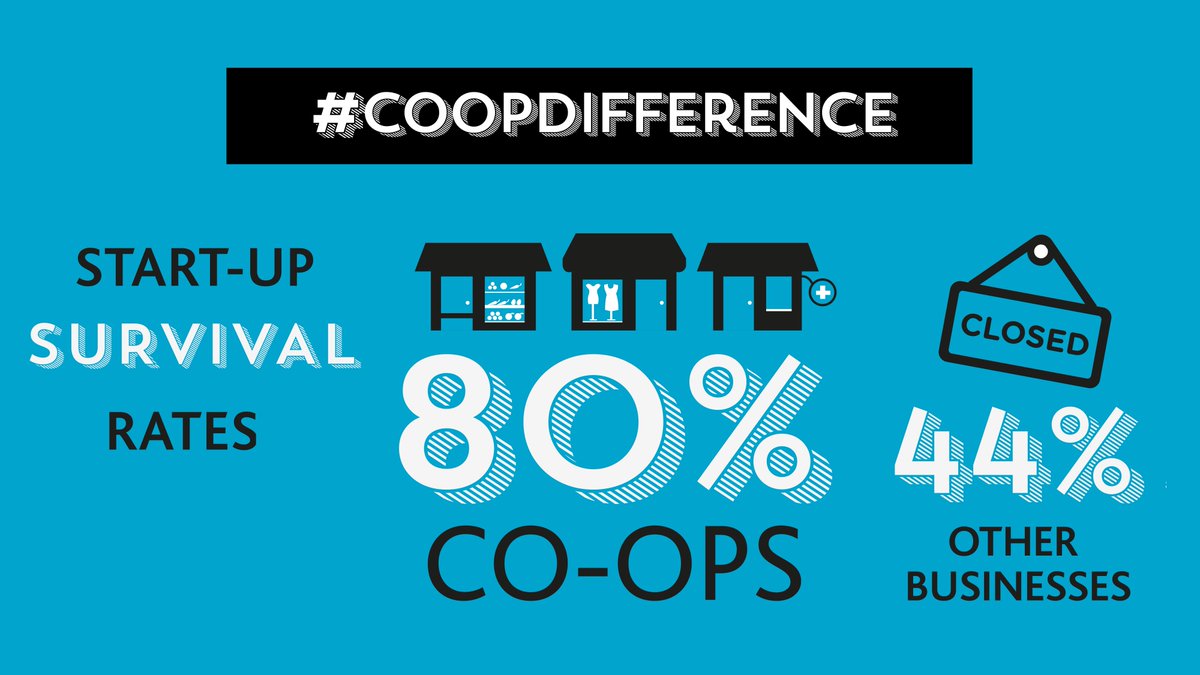 Co-operatives UK has also announced the extension of the Hive – its specialist business support programme for new and existing co-ops – until the end of 2020. The Hive, which is Funded by the Co-operative Bank, has seen more than 500 organisations receive specialist support and training since it was launched in 2016.

Co-operatives UK, which delivers the programme, expects that by 2020 the Hive will have supported 1,200 groups and co-ops with services worth £1.3m. The programme also works to enable communities to take control of valued local assets. It is projected that through the Hive co-ops will have raised £6.5m of finance through community shares by 2020.

Mr Mayo said: “We welcome the additional funding from the Co-operative Bank to extend this vital support for co-ops in the crucial early years of operation.

“Here’s an option that gives businesses twice as much chance of succeeding. In today’s climate, this is precisely what the economy needs, but where is the wider support? We want to see the co-op business model promoted by government and professional services, in the education sector and even more vocally by co-operatives themselves.

“If we want to see a more successful economy, where people have a say in decision-making and receive a fair share then we need more co-operatives.”

The largest co-operatives by turnover remain John Lewis Partnership with £10.2bn, the Co-op Group with £9.47bn and Arla Milk Link with £2.61bn. They are followed by the National Merchant Buying Society Limited (£1.53bn), the Midcounties Co-operative (£1.09bn) and Central England Co-operative (£848m).

Steve Murrells, chief executive of the Co-op Group, said: “It’s clear that co-ops are a sustainable way of doing business and a model that clearly resonates today as we face in to economic and political uncertainty. We’ve seen this evidenced in our own active membership which has grown by 15% to 4.6m in the last year as we’ve invested in building stronger businesses and stronger communities through things like our Co-op Academy schools.”​

Ryan Etchells, head of business banking at the Co-operative Bank, added: “We’re proud to continue to fund the Hive programme and support co-operative businesses as they develop and grow into successful and sustainable businesses in the current economic climate. The Hive is a great initiative and one that we hope will encourage more individuals and groups to set out on the path of starting up their own co-operative business.”

In addition to the report, Co-operatives UK has released a series of case studies showcasing how individual co-operatives are making a difference in various sectors of the economy. For instance, the Organic Milk Suppliers Cooperative (OMSCo), was set up in 1994 by five innovative farmers. It currently has 270 members ranging from Cornwall to Inverness. With a turnover of almost £100m, the co-op is the largest organic dairy co-operative in the UK.

“Becoming an OMSCo member was an easy decision for us,” said Graham Vallis, board member and organic farmer managing 200 cows on his family farm near Exeter, Devon.

“We had a young family to provide for and therefore sought a milk partner that could provide on-going support and certainty. OMSCo’s dedication to the organic dairy sector was clear from the beginning and gave us the confidence we needed to develop our farm business.”

He said OMSCo has developed a variety of added value and specialist organic dairy products for international markets, including premium organic cheeses and infant formula ingredients.

“These opportunities are fantastic for the members, as being a part of a co-operative means that we all share the benefits. The more money the co-operative makes, the greater the return to its farmers and this provides us with greater certainty for the future” said Mr Vallis.

“Being a member that’s on the board, I also see first-hand the practical input that our members have into the decision-making process, which then facilitates the implementation of these new initiatives.”

The co-op has seen its exports grow by 58% to approximately 20% of total revenue in 2017 and aspires to increase these even more in the future.

“OMSCo’s achievements have been underpinned by shared values that champion British organic dairying. I look forward to us continuing to work together as a co-operative finding new and innovative ways to secure our future success,” added Mr Vallis.

Similarly, in Glasgow, the Greencity Wholefoods co-operative is trying to change people’s diets by promoting healthy eating. The co-op was formed in 1978 by a group of activists and, 40 years on, maintains its co-operative ethos while running a successful business with a £6m turnover.

“There’s a disconnect between people and food, and you see people here living on ready meals,” said member Babs Macgregor. “So we work at grassroots level, giving talks and cookery demonstrations to reconnect people with food. And it’s really satisfying seeing people getting excited about food and ways of feeding themselves that are healthy and nourishing.”

“It’s a level playing field,” said member Craig McCormack. “Because it’s your own business, you think about long-term plans and about developing the business. And if you want to do something, you have to get buy-in from the majority of the members.”

To compete with other businesses, the co-op has recently started engaging on social media and had a major IT upgrade.

“It was a significant change internally in how our system operates, so getting to grips with it was a real challenge,” added Ms Macgregor. “But being part of a co-operative means there’s a greater sense of facing challenges together. There’s a social glue in a co-op – the quality of working life is higher. People are very real, and satisfied knowing their contribution is valued. It’s something mainstream companies try to simulate in a forced way, but in a worker co-op, every day is a team building day.”

Making a difference: Social care from Australia’s Co-operative Life
Next
Subscribe to the newsletter