Hullcoin – can blockchain unlock the hidden value in Hull’s economy?

It’s long been the butt of unfair jokes but Hull could be having the last laugh in the form of a truly innovative project.

The city – whose reputation saw it come in at number one in the 2003 book of Crap Towns – is defying the naysayers with signs of a turnaround. London topped the same roll call in 2013 while Hull dropped out of the top 50 – and this year is the UK City of Culture.

But it still has some major needs: a 2015 survey by the city council found that over half the population lived in the most deprived areas of the country.

“Most deprived areas” don’t normally spawn innovation and the city council’s main solution was to throw £100m of its capital reserves into civic improvements to overhaul Hull’s image, and to cosy up to Siemens in an attempt to secure more jobs.

And while other people poke fun about #CityofCulture2017, a small group of truly community-minded “hactivists” have set to work at the real cutting edge of social development to “unlock the hidden value in Hull’s economy”.

Enter David Shepherdson and Lisa Bovill, from Kaini Industries, an initiative which sprang out of a 2014 piece of research, funded by Hull City Council, that explored how the disruptive technology underpinning bitcoin could facilitate a local currency to support communities in Hull affected by poverty. After a few years of development and community outreach they launched Hullcoin, which enables people who engage with charities and community groups across the city to earn digital coins by volunteering and undertaking activities that benefit themselves. Hullcoins can then be redeemed as discounts against all sorts of things at over 140 participating retailers across the city.

Hull City Council and the NHS are both supporting the project, as is the University, Hull College group and the Department of Work & Pensions.

How does the Hullcoin economy work?

Kaini Industries “mined” 10 million Hullcoins – a quick non-energy-intensive process that took about 30 minutes (because it did not require the competitive “proof of work” process associated with Bitcoin). Kaini then runs due diligence on any local community groups that wish to issue coins, to ensure they promote activities which “create a better community”, and allocate them “bundles” of coins – normally in batches of 500. These community organisations, health and employment services then issue individual coins to people for volunteering or helping themselves or others to “create a better community”.

People with Hullcoins can then redeem them at participating retailers across the city in return for discounts on goods and services of between 5 and 50%. The retailers can choose what to do with the coins, either re-issuing them as employee rewards, giving the, to loyal customers as discounts on future purchases, or donating them back to a community group or charity to further stimulate the local economy. Kaini monitors the amount of coins in circulation and has an agreement with the council to take some offline, if required, to help manage supply and demand. 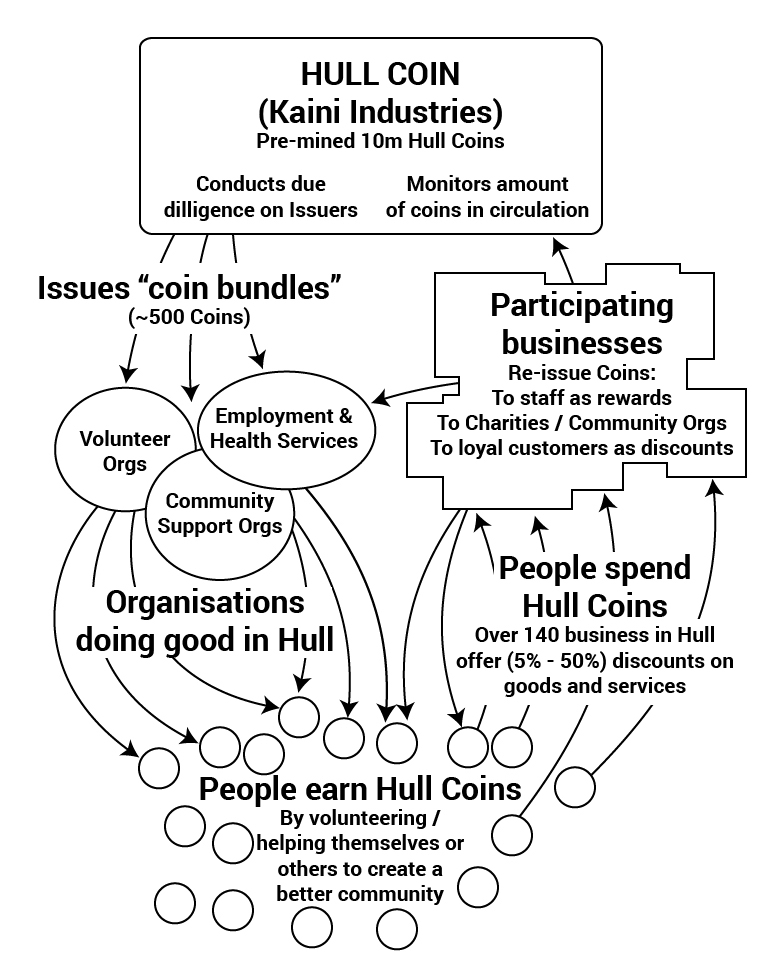 It’s a truly novel idea which uses blockchain to empower Hull’s real assets, its people, by placing a direct and tangible value on community support, self betterment and volunteering – the key aspects of mutual aid which are so critical to community development but so often ignored or undervalued in modern society.

Hullcoin is the first initiative of its kind to utilise blockchain in this way. The project is still in private beta at the moment and its developers are keen to iron out the glitches which will prevent the system from scaling. But if their crowdfunder is a success they have plans to white-label the system for other cities – at which point it could really provide a pathway out of poverty for millions of people.

The concept of Hullcoin has many similarities to “Covestment” a term coined by Jordan Bober and Michael Linton, the inventor of LETS, to describe a means of “financing the future and creating economic resilience by weaving innovations in network currencies, crowdfunding and community microlending”.

In Covestment, companies issue currency (or discount vouchers, if you like) to a Community Covestment Fund from which members of the community can buy the local currency with regular money. The Covestment fund uses the cash to provide loans to local entrepreneurs and businesses, and people use their local currency to obtain discounts when they shop at the businesses which backed the currency at the start. In exactly the same way as Hullcoin the result is a stimulation of the money supply and hence local economy.

The recent surge of interest in new forms of money makes experiments like Hullcoin and ideas like Covestment highly topical – and what’s most exciting is that we don’t need to wait for the government to wake up to the possibilities. These are ideas which we can start experimenting with right now – to take control of our local economies and make them work for the benefit of everyone. 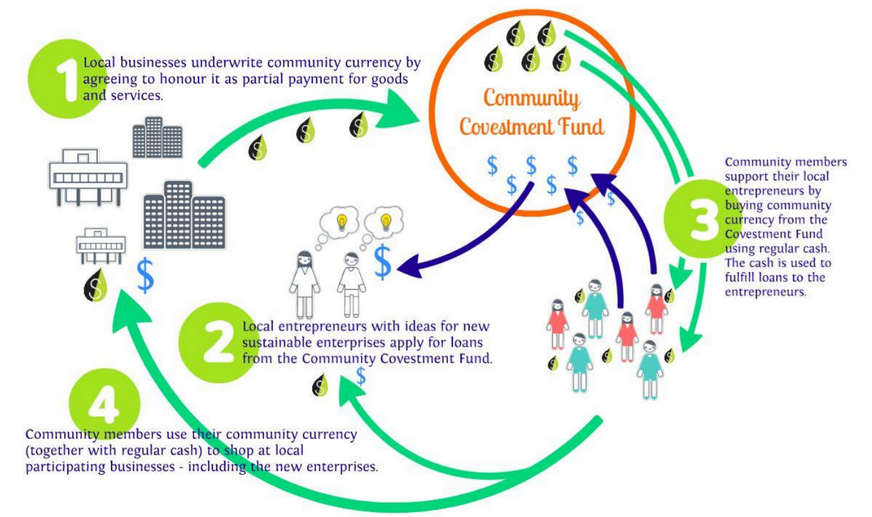 Lisa Bovill, one of the developers at Hullcoin, will speak at the OPEN 2018 conference on collaborative technology for the cooperative economy in July and it will be fascinating to hear how the project is progressing and the impact it is having for the people of Hull. If our hunch is right, it has probably already had a more direct impact on less privileged people’s lives than a single cent of the £100m the city council “invested” in beautifying the city. Watch the 3 min video featuring Bob Clark from the BBC to see how chuffed Bob is to get 15% off his brisket pie – that’s the real “hidden value”, right there.

Find out more about Hullcoin or listen to a 23 min podcast on Hullcoin from World Hacks on the BBC.