On World Architecture Day, we take a look at some of the brick-and-mortar icons of the the UK’s co-operative movement

In 2016 and 2017 Co-operative Congress took place in Unity Hall, Wakefield, representing the resurgence of one of the co-operative movement’s most impressive buildings.

Unity House was opened in 1904 as the headquarters of Wakefield Co-operative Society. Occupying an imposing corner plot in the centre of town, it reflects the co-operative movement’s historic commitment to educational and social activities as well as trade, combining retail space on the ground floor with office space and a grand meeting hall above. Like many other co-operative buildings of the time, it is adorned with decorative features such as the wheatsheaf and the beehive, which unmistakably express ideas of mutual support and industry, and communicate co-operative values such as solidarity.

Architectural historian Dr Lynn Pearson is writing a book about the unique contribution the co-operative movement has made to Britain’s architectural landscape, which will be published by Historic England in 2020.

Dr Pearson explains: “I’ve researched industrial buildings for several years, and began to realise just how many Co-operative Wholesale Society (CWS) factories there were throughout the country. Co-op shops also made a significant contribution to our townscape – they were pretty much everywhere – and the CWS has left us a legacy of fine warehouses and offices in some major cities.”

‘Co-opography’, an exhibition held at the Rochdale Pioneers Museum in 2014-2015, asked the public to contribute photos of their favourite co-operative premises. These pictures told a story of changing shopping, working and leisure habits. They also demonstrated the vast number of independent co-operatives that existed; each town, village and suburb once had its own society, which made its mark on the local landscape.

Related: Co-ops’ head offices are among the most beautiful buildings in the world

Stephen Marland has travelled around photographing co-operative buildings and took several of the photographs in the exhibition. “I was attracted to co-ops as a vernacular typology,” he says. “I love the tile work and architectural type that characterises the majority of co-operative buildings, and the sense of solidity and illusory permanence that pervades them all – as well as the ethics and history of the movement.”

The priorities of the co-operative movement and its needs for space have changed over time. After decades as a gig venue and nightclub, Unity House was vacated in the 1990s. The story of its resurrection and restoration is as remarkable as the building itself. Following a community share offer, it reopened in 2014 as a multi-purpose venue hosting gigs and community activities as well as housing a café and office space.

Another landmark co-operative building transformed for a new purpose is the former Newcastle Central Co-operative Society headquarters. Opened in 1932, the streamlined modern building, with distinctive twin clock towers, had been empty for several years before it was taken over by Premier Inn and reopened in 2016.

This building, like many others, was designed by the CWS architects’ department, which served co-operative societies around the country from its offices in London, Manchester and Newcastle. Dr Pearson explains that local co-operative societies were unusual in that they “took part in the architectural process, helping to design their own places of work”. 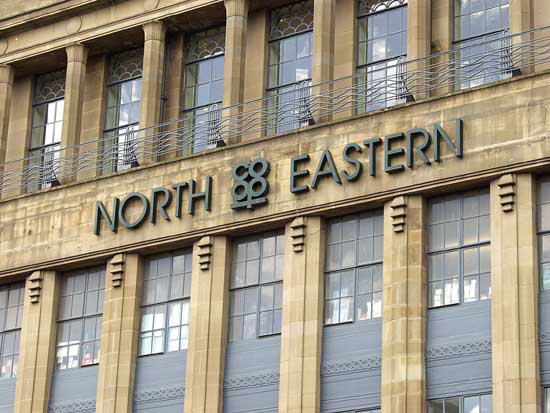 CWS architects embraced trends in architecture, from art deco to mid-century ‘international style’ modernism. One of the best places to get a sense of this is in Noma, Manchester’s ‘co-operative quarter’, where buildings of different styles and eras formerly occupied by the Co-operative Group are currently being refurbished for office, retail and leisure use. The elegant redbrick Federation House, a former drapery warehouse opened in 1914, was one of the first to be redeveloped; it now houses Co-op Digital, as well as an array of start-up companies.

Although many popular co-operative buildings date from the nineteenth and early twentieth centuries, a growing number of more modern co-operative buildings are being celebrated and recognised for artworks commissioned after the Second World War. Artworks were often incorporated into public and commercial developments at the time, from libraries and schools to offices, as part of a widespread desire to beautify living, working and educational environments, to bring art to a wider section of the population, to demonstrate progressive values and to confer prestige. Dr Pearson explains that “the Co-op made a big impact with some lovely 1950s-60s murals on shop exteriors, so attractive and colourful, and now rare”.

Some of these murals were undertaken in-house. Others were carried out by artists who, while not household names, worked on some of the most important buildings of the day and were innovative in the techniques and materials they used. This included the prolific architectural sculptor William Mitchell, whose abstract fibreglass mural is the centrepiece of the sleek 1960s foyer in the CIS tower in Manchester. Mitchell undertook work for commercial and public sector clients across the UK and internationally; other notable commissions include the decorative doors of Liverpool Metropolitan Cathedral.

Next door in New Century House, two glittering murals by Steven Sykes depicting stylised musicians flank the stage in New Century Hall, a 1960s ballroom that once hosted pop concerts by some of the leading acts of the day. Sykes designed the Gethsemane Chapel in Coventry Cathedral in a similarly glitzy mosaic style.

A 1950s co-operative department store in Coventry, built as part of the city’s post-war redevelopment, was almost demolished after Heart of England Co-operative moved out in 2015. Unusual carvings on the pillars outside by John Skelton, a nephew and apprentice of the artist and craftsman Eric Gill, depict the history, activities and ideals of the co-operative movement. These have contributed to the council recognising the building’s architectural significance, and it will be retained and converted into housing.

In Hull, campaigners are fighting for the survival of post-war artworks by Alan Boyson, as a large area of the city centre undergoes redevelopment. ‘The Three Ships’ is a huge mosaic composed of hundreds of glass squares that faces out from a former Co-operative department storem (later converted into BHS and left empty since the chain’s closure).

Leigh Bird from Hull Heritage Action Group explains: “The links to Hull’s difficult wartime years are very strong. Hull was the second most bombed city outside of London, and it took 20 years to rebuild the bombed Co-op that stood on the same site.” Inside the building, a wall of glass fish, also by Boyson, references the fishing industry.

Ms Bird adds: “Alan Boyson’s brief from the Co-op was to create a piece of art that united the community through art and industry. Its maritime theme was the obvious subject for one of England’s foremost fishing ports.”

A petition for the murals to be recognised and protected has so far received over 3,700 signatures, and Hull Heritage Action Group is hopeful that the mural will be incorporated into any future development.

“We want to ensure that the murals are around for future generations,” says Ms Bird. “‘The Three Ships’ has been part of our lives for over 50 years and people seem to value it more than ever; I don’t think many people simply view it as a storefront. It looms large in the city centre and acts like a compass where ever you are. For many people it symbolises Hull more than the Humber Bridge.”

Natalie is a freelance writer with an interest in cities, architecture and art, who is currently finishing a PhD at UCLan about post-war art and education

Albany, Piccadilly: The oldest continuing co-owned housing complex in the world?
Next
Subscribe to the newsletter