A guide to governance: How do we steer the co-operative ship?

Co-operative experts agree that good governance is at the heart of a successful co-op – but what does that entail?

One useful definition of governance is: “The systems and processes concerned with ensuring the overall direction, supervision and accountability of an organisation.” (Chris Cornforth Governance Overview, Governance and Participation project, Co-operatives UK, 2004)

The word ‘governance’ is from the Latin “gubernare” – to steer (a ship). And that’s what a governing body does. Governing an organisation isn’t the same as running it day-to-day.

As Co-operatives UK says in its Simply Governance guide: “Governance is not about paying wages or bills, but rather ensuring that there are effective systems in place to ensure that wages and bills are paid in a timely manner.”

Depending on the type of organisation, a co-op’s governing body could be referred to as a board of directors, or a committee of management made up of committee members. Co-operatives UK currently recognise as co-ops: enterprises incorporated as co-operative societies; community benefit societies; companies; community interest companies; limited liability partnerships; and credit unions.

WHO CAN BE ON THE GOVERNING BODY?

There is usually a difference between who runs a co-op (the ‘executive’) and who governs it (the ‘governing body’) – but not always. In large organisations, the day-to-day executive running of an organisation is done separately from its governance, with different people carrying out these different roles – but in smaller organisations (12-15 people) it is more common for the same people to carry out both governance and executive roles. 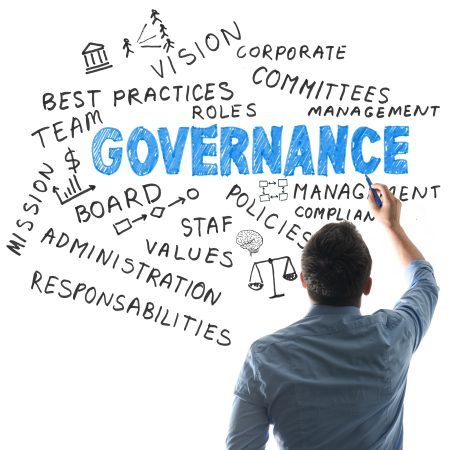 According to Co-operatives UK, “in a co-operative or community enterprise, the governing body is typically elected from within the membership, although it is possible to appoint governing body members who are not members of the organisation”. So in many cases, if you are a member of a co-op, you should be able to stand for election as its director.

But election isn’t the only route onto a board. There are a lot of different types of co-operatives with different histories and different kinds of memberships – and this is reflected in the make-up of the governing body. The initial structure is decided when an organisation set up, but it can be changed if the governing body puts a proposal to a vote at a special general meeting.

According to Co-operatives UK, as well as by election, people can join a governing body through:

“Good governance is at the heart of a thriving and sustainable co-op,” says Emma Laycock, advice manager at Co-operatives UK.

“When the right people with the right skills and experience are in place, with agreed policies and good communication, the co-op can set its direction, hold the board to account and be sure it is operating in the interests of and providing value to its members.” 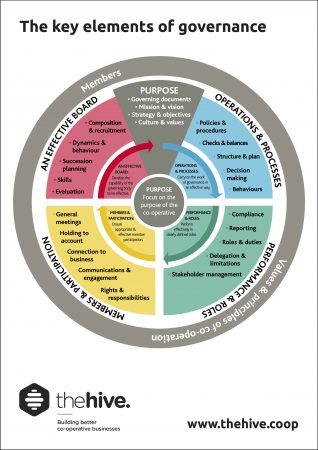 Good governance supports the governing body of a co-operative in its task of creating and maintaining a strong and sustainable business that meets the needs of its members – conversely a neglect of governance weakens accountability and carries multiple risks to the business and its strategy.

Working closely with its members, Co-operatives UK has helped define what good governance looks like for co‑ops by creating a series of codes of governance for consumer, worker and agricultural co-operatives – and has also devised the ‘governance wheel’.

The wheel “depicts the key areas of governance that should be in place within a thriving co-operative business”. The key elements it highlights are: an effective board; operations and processes; performance and roles; and members and participation.

The wheel was created by the Co-operative Governance Expert Reference Panel, which was set up after Co-operatives UK members identified a need for an independent and authoritative voice in the co-op sector for best practice in governance.

Another output from the panel is a statement on the role of a board after a need was found for a clear, authoritative and concise statement about the board’s role in a co-operative.

“For me the purpose is to bring people from different co-operative sectors who have an interest and knowledge of governance and governance issues, to then offer advice to the wider co-op sector, that can hopefully be used and referred to by all sectors,” says Mr Hodgson.

“The benefit is that this advice is coming from the very people that work with these issues on a-day-to day basis, from larger consumer co-ops and housing co-ops to worker co-ops like Suma.”

He adds: “We are currently working on some stuff on board democracy and diversity in co-operatives, which is based on some really interesting research so I’m really looking forward to the outcome.”

WHAT ARE THE DIFFERENT ROLES?

Stories of governance: Mee three directors from three very different co-ops
Next
Subscribe to the newsletter