Dr Doug Belshaw of the We Are Open Co-op discussed the idea, which would show a commitment to the movement’s values, at the Co-operative Education Conference

By Anca Voinea
Doug Belshaw speaking at the conference in Manchester

What is the co-operative character and how can it be badged? The question was the main topic of Dr Doug Belshaw’s presentation at the Co-operative Research and Education Conference in Manchester.

A former academic, Dr Belshaw left formal education after 27 years to work as a consultant in the tech industry. He is currently a member of We Are Open Co-op, a collective working to help people make the most of open learning, innovation and communities.

Dr Belshaw described co-operation as a virtue rather than a collection of skills. To showcase these, he suggested using digital badges via Openbadges.org, an initiative started by Mozilla in 2011. Since then thousands of organisations across the world have been issuing badges.

“Open badges can point to evidence of doing something, not just a claim, turning claims into proofs,” he said.

How does it work in practice? Individuals or organisations can issue a badge for anyone who can accept it or not. If they choose to share it, they can put it anywhere on the web.

“It’s a system that can be used by anyone for anything,” said Dr Belshaw.

Any entity that can be described with a name, description, URL, image, and email address is a possible candidate to become an Issuer. The badges can be used to recognise any kind of achievement in any setting, across the different stages of an individual’s life.

The badges include information on the organisation or individual who issued the badge, the criteria that the badge has been assessed against, evidence, when the badge was issued, a verifiable reference to the recipient and other details. 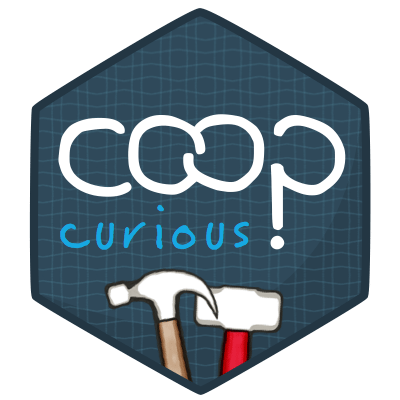 We Are Open Co-op is already issuing a badge for people showing an interest in co-ops. Called Co-op Curious, the badge designed by Bryan Mathers was launched in December last year and aims to show those with an interest in joining or starting a co-op.