Can John Lewis teach us a better way to do business?

Right now, the John Lewis Partnership seems to be everyone’s favourite business. Its department stores offer quality and helpful staff; its supermarket chain Waitrose sells you all sorts of tasty...

Its department stores offer quality and helpful staff; its supermarket chain Waitrose sells you all sorts of tasty treats; and, of course, it delivers memorable TV adverts every Christmas.

Above all, the John Lewis Partnership (JLP) is famous for being an employee-owned company, the result of a decision by its one-time owner Spedan Lewis to give the business to its workers. It is run – very successfully, it seems – in the interests not of investors but of its ‘partners’, the staff.

Not surprisingly, politicians on the left have called on Britain’s businesses to be less like, say, Sports Direct and more like John Lewis. 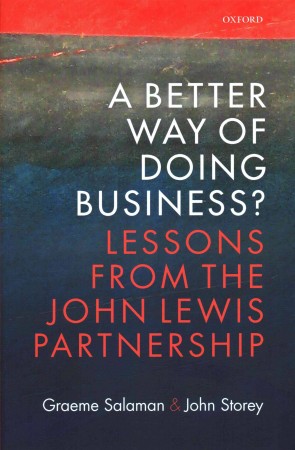 But as Graeme Salaman and John Storey point out, JLP may be a British institution that is much talked about but it is not necessarily much examined or understood. Their new book A Better Way of Doing Business? Lessons from the John Lewis Partnership attempts to remedy this.

On one level, the book offers a fascinating in-depth account of JLP’s business strategy over the past 25 years. It gives us a privileged position in the JLP board room, listening in as strategies for growth are debated, business plans assembled and existing business models reassessed.

Here is a detailed account, for example, of the significant changes at JLP in 2000-2001, a time which saw the company’s first ever business plan produced, and the John Lewis stores move for the first time to Sunday opening.

Here is an appraisal of the strategies adopted by the board later in the decade, including the major investment carried out in new stores and the response to the 2008 downturn.

All this is, frankly, a gripping read and it is one written by two academics with just the credentials to do it: Salaman is emeritus professor of organisational studies and Storey is professor of management, both at the Open University.

More significantly, the authors were invited by JLP to work with the company for several years on aspects of its management and governance, allowing them to meet and record interviews with a wide range of managers and staff. Their book acknowledges the privileged access they enjoyed, but is in no sense an uncritical hagiography.

I imagine that the account of JLP’s business strategy may well be scrutinised by senior management at competitors such as Sainsbury’s, M&S and House of Fraser – and one hopes it will be carefully read by senior staff at the Co-operative Group.

But the book is very much more than a contemporary business history. At its heart is a desire to explore just how a large business, with nearly 100,000 staff, tries to balance the dual poles of commercial success and the famous obligation given to JLP by Spedan Lewis that its “ultimate purpose is the happiness of all its members, through their worthwhile and satisfying employment”.

What is the John Lewis Partnership ultimately being run for? Is it to grow – in order, perhaps, to prevent competitors from muscling in? Is it to maximise profit so that, among other things, partners’ annual bonuses can be kept up?

Or does it need to operate to different business goals from conventional corporates?

The importance of the key question of JLP’s purpose – which in turn leads to a host of other questions about the way it is managed, the way accountability works, the links (or non-links) between employee participation and business success, the right of the staff to be engaged in debating the way forward, the choice of management performance indicators, and much more – is highlighted by Salaman and Storey in their opening chapter where they explain the purpose behind the book.

They start with a comprehensive critique of the modern business ownership model, stating in their very opening sentence that “something is wrong with the modern corporation”. Their task, as they see it, is “the analysis of the nature and deficiencies of the prevailing US/UK model of the firm” but the way they try to tackle this is by looking at how a very different business model works in practice.

While allowing senior managers space to give their own assessment of the way JLP is aiming to combine its partnership principles with business growth, and trying to harness partner engagement to competitive advantage, the authors are also prepared to listen to the counter argument.

This says that JLP’s recent push for growth has seen a subtle diminution of Spedan Lewis’s principles of employee empowerment. Recent commercial decisions, such as the agreement to franchise the Waitrose brand in motorway service areas (so that a small number of Waitrose staff are not JLP partners) and to outsource some parts of the business to third-party firms (so that cleaners are also excluded from partner status) are discussed.

Conversely, the authors also give space to the argument that JLP, before recent management changes, had become a sleepy conservative retailer with too much sense of entitlement by some staff.

A Better Way of Doing Business? is a useful book because it offers such an in-depth appraisal of the often difficult practical issues faced by businesses trying to follow different mores from those of conventional corporates. I hope it will be picked up not only by senior management at the Group and the larger regional societies but also by those representing members on co-op society boards or on the Group’s Members’ Council. Co-operative activists will find it thought-provoking, too.

Book reviewers sometimes feel the need to assert their credibility by tut-tutting over mistakes they have identified in the text and I want to resist this tendency – but nevertheless, for the record, there are a few minor slip-ups which have survived the editing process.

More substantively, I am unhappy at the authors’ linkage of workers’ co-ops and employee-owned business together under a single suggested definition (businesses “where employees own the majority of shares”) since I don’t think talk of majority share-holdings is the right way to approach the definition of workers’ co-ops.

These are minor complaints. The main thing to say is that A Better Way of Doing Business? deserves to escape the academic publishing ghetto. Despite its high price, it needs a wide readership: it should certainly be studied on co-operative business courses (St Mary’s University’s international masters course, for example) and used on mainstream MBA courses. If we are really going to escape the current hegemony of the conventional corporate model, we need our MBA graduates to have at least some sense that another way of doing business is possible – and legitimate.

Really, though, anyone who is engaged in all the challenges which come from trying to develop co-operative businesses and all those who are wrestling with the dilemmas of reconciling profitability with business ethics, and of finding ways of doing management in a democratic way, will find this book of value. The issues it explores are issues not just for John Lewis but for the wider family of co-operative businesses as well.

Editorial: How much is a stake in your co-op worth?
Next
Subscribe to the newsletter