Co-ops offer a helping hand in resettlement of refugees

Over one million refugees and migrants reached Europe across the Mediterranean last year, says the UN Refugee Agency. Of these, 84% came from 10 countries, fleeing war and...

Over one million refugees and migrants reached Europe across the Mediterranean last year, says the UN Refugee Agency.

Of these, 84% came from 10 countries, fleeing war and persecution. But European states have yet to come up with a common response to the biggest displacement of people since the Second World War. Instead, non-state organisations are playing an important role.

Among these, co-operatives are making a difference by providing assistance as well as helping refugees to integrate into their new communities. Camelot, a social co-operative in Bologna and Ferrara, Italy, provides a number of services for migrants and refugees, including mentoring, Italian classes, training courses and internships.

So far, it has worked with 541 adults and minors across Ferrara and Bologna. Overall, Italian social co-ops provide 18,000 refugees, asylum seekers and migrants with services and projects in 220 welcome centres and 170 housing structures.

In Greece, the social co-operative Wind of Renewal is collaborating with three other organisations to set up a hostel providing housing for 120-150 people for six-month periods or longer. Refugees will receive food, clothes, health care and training.

The International Co-operative Alliance has pledged to support action by its members around the world on the refugee crisis, which president Monique Leroux called “one of the most important issues the world is confronting today”.

The crisis was a key topic at Cooperatives Europe’s general assembly in Brussels last month, when co-operators from Sweden, Italy, Israel and Turkey discussed their work with refugees over the last 18 months in southern Europe.

Dirk J. Lehnhoff, president of Cooperatives Europe, said: “The co-operative answer is driven by solidarity, self-help and self-responsibility. Solidarity is key to the most urgent needs of those hundreds of thousands of people.”

He added: “Building walls against refugees won’t work.” Instead the emphasis should be “building bridges in order to give people their dignity and their lives back”.

Co-ops, with their long experience in providing housing, education and jobs, are well-placed to help, he said.

Mully Dor, chair of the Arab-Jewish Center for Equality, Empowerment and Cooperation (AJEEC-NISPED) told how the organisation is working with IsraAID, a non-governmental organisation, on humanitarian projects abroad. Israel is not accepting refugees from Syria and Iraq.

The institute was founded in 1998 by Dr Yehudah Paz, who dedicated his life to peace between Israel and Palestine, while IsraAID provides disaster relief and long-term support, with most volunteers coming from the Israeli co-op movement.

“The challenge of the refugees in Europe concerns every community and co-op member,” said Mr Dor. “The Alliance’s co-op organisations have the best experience in meeting refugees’ real needs and giving them the tools to become part of the society. It is our duty to help.”

AJEEC-NISPED acts as a development agency for the co-op movement in Israel – particularly Bedouin communities in the Negev desert. “As an Arab-Jewish organisation with 80% Muslim staff, we understand the cultural complexity and heterogeneity of refugee communities,” said Mr Dor.

“We have the skills, experience and expertise to design and deliver programmes that will help them in finding jobs, education and housing, delivered in Arabic by trainers with a deep knowledge of the multiplicity of Arab and Muslim identities and experiences.”

He told how IsraAID is helping  Syrian refugees living in camps in Jordan. The first team went in June 2013, distributing emergency supplies and hygiene kits.

He said there are “overwhelming needs on the ground” including trauma assistance, child-friendly spaces and women’s shelters.

Since 2012, the autonomous Kurdish region of Iraq – itself suffering an economic crisis – has hosted a quarter of a million Syrian refugees and more than a million internally displaced Iraqis.

“IsraAID, in partnership with a Canadian partner, is providing emergency relief items to thousands of displaced Yezidi and Christian families, and is launching education projects to support the Kurdish education system,” said Mr Dor.

The organisation has also stepped in to help with the refugee crisis in the Mediterranean, which has seen thousands of deaths, including children, aboard crowded vessels. Since September 2015, IsraAID has sent over 60 medical and psycho-social professionals help refugees landing on Lesvos.

“IsraAID’s majority Arabic-speaking mobile relief teams meet them on the beach to assess their medical condition and provide treatment as well as emotional support,” said Mr Dor. “The team is also tasked with grief counselling for those who lost family members on the way, or who carry the scars of more than five years of war.”

The institute is at work in several countries and plans to help set up co-ops in each. It has already worked on co-operative development in Sri Lanka, Haiti, Kenya, Japan, the Philippines and Burma, and is now in Ecuador helping people rebuild after the earthquake. AJEEC-NISPED is guided by the Alliance’s framework for co-operative response to disaster reconstruction.

“We are looking for co-operation in Europe with our Italian colleagues and Cooperatives Europe Development Platform (CEDP),” said Mr Dor. “The overall aim is to facilitate international co-op development, to integrate co-operatives into development policies, and to advocate for the
co-operative business model.” 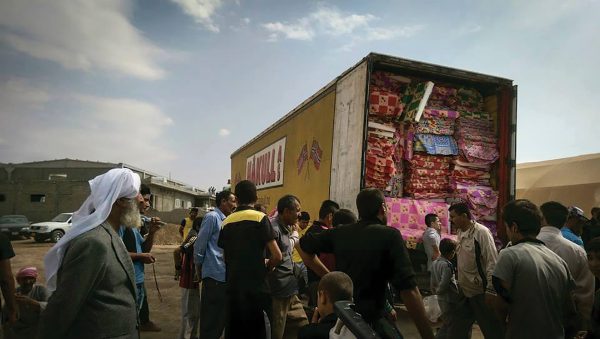 The conflict in Syria has also affected Palestinians in refugee camps across the country. According to Mr Dor, they are close to conflict areas inside Syria, and suffer high poverty rates, while those forced to flee to Jordan and Lebanon have a tenuous legal status.

An estimated 450,000 of the 560,000 refugees registered with the UN Relief and Works Agency in Syria remain inside the country, and two thirds (280,000 people) of them are internally displaced. The majority are in need of sustained humanitarian assistance. But tens of thousands of Palestinians are trapped in areas of active conflict, such as Yarmouk or Khan Eshieh in Damascus or Muzeirib and Jillin in Dera’a, with extremely constrained access to humanitarian assistance.

“Of those who have been forced again into exile, around 42,000 have fled to Lebanon and more than 17,000 to Jordan,” said Mr Dor. “The vast majority are living a precarious, marginalised existence, unable to regularise their legal status or access civil registration procedures and basic social services.

“They are largely dependent on UN and humanitarian organisations like us for basic subsistence needs, including food and shelter, as well as basic education and health care.”

Meanwhile in Canada, co-ops are trying to help refugees integrate. The Co-operators, an insurance and investment co-operative, is donating $260,000 to seven organisations that work to welcome Syrian refugees.

“With thousands of refugees coming to Canada, many organisations and individuals are pitching in to welcome them,” said Kathy Bardswick, president and chief executive of The Co-operators. “We are pleased to support these outstanding organisations that provide much-needed employment readiness services to immigrants and refugees in their communities.”

A one-time grant programme has been created through The Co-operators Foundation’s Community Economic Development Fund to support initiatives aimed at preparing refugees for employability.

Desjardins Group, the largest association of credit unions in North America, is collaborating with Canadian Red Cross to welcome Syrian refugees by making a CAD $50,000 donation to help meet their basic needs on arrival.

Health co-ops also contribute to integrating refugees by providing services to those who are not yet covered. The Umbrella Multicultural Health Co-op in Vancouver has launched an online fundraising appeal to provide the extra services.

Various UN agencies have also worked with co-ops to support refugees. In the Akkar region of Lebanon, the UN Development Programme and International Labour Organisation have helped set up a Green House Nursery co-op, which treats, grows and sells seeds at an affordable price in the region.

According to Simel Esim, chief of the ILO’s Co-operatives Unit, the co-op benefits 200 Lebanese farmers and Syrian refugees.

This month, ILO director general Guy Ryder will be visiting refugee camps in Turkey. He has already visited refugee camps in Jordan. He said the international community needed to help countries like Jordan deal with the refugees.

“It is necessary to reconcile the obligation of providing aid, jobs and development support to the refugees with the necessity of effectively managing the labour market of receiving countries,” he said.

“The sentiment of Syrian refugees is that their lives are on hold. Somehow their lives are frozen in the circumstances in which they find themselves, and there is an interest – and I think it’s human, I think it’s understandable – for them to find a place in labour markets.

“But they know, I know, and I’m sure you know, that cannot be a situation that displaces or compromises the labour market prospects of Jordanian workers.”

A recent study by the ILO looks at the potential of the co-op model in responding to the refugee crisis. The research concludes that as people-centred businesses, co-ops provide services and goods (such as care and housing) which are important for refugees but not as readily available through other enterprises.

Moreover, adds the study, co-operatives have developed integrated practices suited to refugee needs. According to the research co-operative projects can help eliminate resistance to refugees by involving host communities and bringing them benefits. The ILO study highlights examples of 27 co-ops that are involved in responding to refugee needs in different contexts.

“One of the intervention models we are developing is a co-op exchange on refugee response – building on knowledge from countries which have developed activities,” said Ms Esim.

“There are already some creative responses from co-operatives in Turkey and Greece in reaching out to the refugees – such as milk distribution to refugee children at cost in Izmir, Turkey through dairy co-ops in coordination with local government and with the participation of youth co-ops.”

What is the way forward for co-operative schools?
Next
Subscribe to the newsletter