A report from the International Labour Organization on co-operatives as a unique model in care provision looks at the challenges and opportunities they face and identifies the resources they need to fulfil the role....

A report from the International Labour Organization on co-operatives as a unique model in care provision looks at the challenges and opportunities they face and identifies the resources they need to fulfil the role.

The issue of care is a major concern for the United Nations as the proportion of people aged over 60 is projected to grow to 22% – two billion people – by 2050. The report was an initiative of two ILO bodies, the Cooperatives Unit and the Gender, Equality and Diversity Branch, in an attempt to assess the global landscape of co-operatives that provide care.

The research consisted of an online survey and key stakeholder interviews, and suggests co-ops are emerging as innovators to provide and generate access to better terms of conditions for care workers. 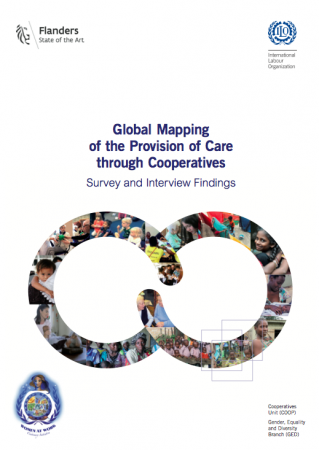 The survey had 182 respondents from the care sector, co-operatives and research institutions. Of these, 44% said co-ops have emerged to provide care because needs were not being met by private and public providers.

According to study participants, most care co-ops are small enterprises. About a third of the survey respondents directly connected to a care co-operative said it had fewer than 50 people, with approximately 15% reporting their co-operative employed between one and 10.

Over 30% of survey respondents directly affiliated with a care co-operative identified childcare as a service provided.

The survey found care co-ops are most likely to employ full-time workers, followed by part-time workers. Less common are temporary short-term, contract and on-call workers, as well as unpaid volunteers.

Care co-ops are emerging as employers of populations often excluded from labour markets. Almost 42% of respondents directly affiliated with a care co-operative reported that their co-op employs people aged 18-25.

A quarter of survey respondents reported that their co-op’s staff are of racial or ethnic minorities and a third said persons with disabilities were employed by the co-operative.

Almost 28% of survey respondents directly affiliated with a care co-operative reported that their co-op employed migrant workers in domestic work and home-based childcare, nursing and centre-based childcare in particular.

The report also looks at pay. Almost 42% said their co-operative pays the country’s minimum wage to all employees – but the survey found wages are not necessarily higher in care co-ops.

Co-operatives also often provide other benefits, such as training, negotiation skills or a second language, the survey found.

Another problem mentioned was the double burden and work-life balance for women, especially mothers. Co-ops provide more opportunities for women to get involved due to flexible hours and regularising work hours.

Half of respondents affiliated with a care co-operative said that women comprised 50-100% of their staff, almost 6% of whom reported that in their co-operative all workers were women.

The report concludes that there is no ‘one size fits all’ co-operative solution for care because of different political, legislative social and economic contexts. Sharing good practices and lessons learnt can help emerging care co-ops navigate their own contexts.

The paper argues that more evidence and data is needed in order to move forward. Additional ILO COOP and GED publications on the provision of care through co-operatives are underway.