World’s top co-operatives grow by 19.5% since 2010 despite recession

Despite the global recession dominating the world’s economy, co-operatives and mutuals have grown by 19.5% in the last four years. The fourth edition of the World Co-operative Monitor...

Despite the global recession dominating the world’s economy, co-operatives and mutuals have grown by 19.5% in the last four years.

The fourth edition of the World Co-operative Monitor has been released. The findings show good news for the co-operative movement, as co-ops and mutuals continue to grow across the globe.

The most notable statistic shows that the world’s largest 300 co-ops have increased their turnover from $2.2 trillion to $2.36 trillion ($2,360 billion) in the last year, an increase of 6.9%. The Monitor used data from 2013 to calculate the figures.

As well as this growth for the world’s biggest co-ops, the number of registered co-ops has also increased substantially – from 1,926 to 2,829.

Comparing with last year’s Monitor also shows just how healthy co-op growth has been. Last year (which used data from 2012) there were 1,313 co-ops with a turnover of more than $100m. That has now increased to 1,658.

The data incorporates the widest spread of co-operatives yet – covering 2,829 co-ops in 76 countries. Together these organisations reported a collective turnover of $2,950.82bn. 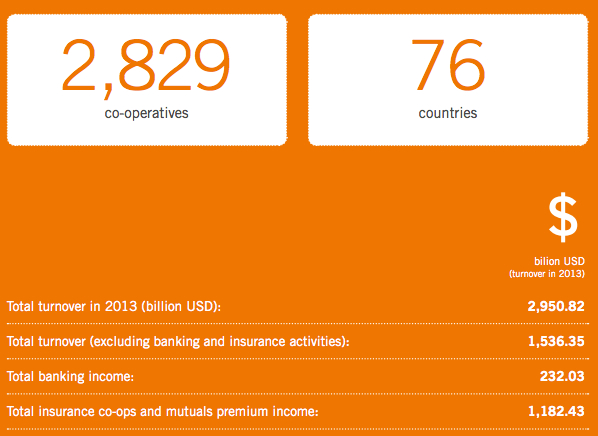 The findings were presented at the International Co-operative Alliance global conference in Antalya by Gianluca Salvatori, the chief executive for the European Research Institute on Cooperatives and Social Economy (Euricse). The Monitor is produced in partnership between the Alliance and Euricse. It has become a key component in analysing the world’s co-operative movement, providing information for research into co-operative business enterprises.

But, Mr Salvatori told delegates that it is time for co-operatives to “become leaders rather than followers”. He said: “The numbers we present, the rankings we develop, do not show the extraordinary capacity the co-operative movement has to interpret social change.

“It’s no longer enough to show that co-ops perform as well as shareholder companies, we need to focus on what makes us different. We have to become the benchmark for others. Other companies need to measure through indicators of social impact. But, we need to do this before social impact becomes a logic we don’t agree with.

“Let’s use the potential of the World Co-op Monitor to show the difference of the co-operative model. Let’s not limit ourselves to compete.”

Based on turnover, the world’s top co-operative in 2013, for the fourth year in a row, is Japanese-based insurer Zenkyoren with a total output of $63.34 billion.

In the top 20, there are five enterprises from the USA and Japan respectively; three from Germany; three from France; two from Switzerland; and one each from South Korea and Spain.

Mr Salvatori added: “The co-operative movement has grown yet again, the largest co-operatives are doing well. The overall database has grown much bigger than previous years. The data confirms the trend over recent years, the picture is clear, that during the crisis co-operatives outperformed other businesses, gaining market share and getting stronger.”

The top ten co-operative and mutual enterprises are:

Another telling statistic is the table shows the ranking by turnover based on the ratio to Gross Domestic Product (GDP) per capita. This relates the turnover of the co-operative to the purchasing power of the country where it is based. This ranking highlights the strength of the co-op within the country. In this comparison, Indian Farmers Fertiliser Cooperative Limited (IFFCO) came out on top, followed by NH Nonghyup of the Republic of Korea, Zenkyoren of Japan and Unimed from Brazil.

Dame Pauline Green, outgoing president of the International Co-operative Alliance, said: “This year’s 6.9% increase in the figures for the world’s largest 300 co-operative and mutual businesses is a great tribute to the growing strength of our sector of the global economy.

“These figures are based on the 2013 results, and represent the fourth year in a row of consistent growth i.e. from 2010 to 2013 – the years in which the financial collapse and global recession still dominated. This is a remarkable achievement for a model of business that is not present on the world’s stock markets and is often invisible to the economic commentators and political leaders. No wonder that one billion of the world’s citizens have chosen to invest some part of their life in a co-operative!”