The slow death of the Cyprus Co-op Bank

The collapse of the Cyprus Co-operative Bank was neither the largest nor the most famous of the banking failures that domino-ed across Europe in the wake of the ‘great recession’.

But it carried many of the same characteristics – and illustrated that mutual banks are just as capable as plcs of being ruined by mismanagement and self-interest. An inquiry into the failure of the Cyprus Co-operative Bank has just concluded and a report from a high-ranking committee of investigation is expected soon.

Cyprus hit the world’s headlines for the wrong reasons in 2013, with queues of people withdrawing money from ATMs. This followed rumours in the financial press that Cyprus’s banks would be forced into a ‘hair cut’, with depositors sharing the pain. Inevitably this created a run on accounts, with around €2bn taken out. The Cyprus Co-operative Bank was one of the banks plunged into crisis and had to be recapitalised with €1.5bn in state funds in 2014.  This was followed by an additional capital injection of €175m the following year. The state was left as majority owners of the bank.

A number of previously independent co-operative credit institutions were left, in effect, under state control and ownership. This led to a rationalisation of these institutions from more than 90 to just 18 – though they are in effect now a single organisation. The Cyprus Co-operative Bank (also called the Co-operative Central Bank) owed its creation to those local credit institutions, which began in the 1920s as low-cost lenders to farmers and smallholders who had been dependent on high cost finance. The Co-operative Central Bank was formed, as the name suggests, as the clearing bank for these local co-ops. But almost 100 years after its formation, these local bodies, as well as their central bank, ran out of cash.

Related: Co-op banks in crisis – you can’t put a price on values

Recapitalisation of the Cyprus Co-operative Bank represented state aid, which had to be approved by the European Commission. Joaquin Almunia, then Commission vice president in charge of competition policy, explained: “The [Cyprus] co-operative banking sector is heavily burdened by the poor quality of its loan book, due to past careless lending.  The in-depth restructuring plan approved lays the foundations to transform the co-operative banking sector into viable credit institutions servicing the Cypriot economy on a sustainable basis.“

Despite the recapitalisation, the Cyprus Co-operative Bank continued to be insolvent and unsustainable, carrying the weight of €7.5bn of non-performing loans. It was forced by the European Central Bank’s Single Supervisory Mechanism to wind-up its operations last year. The bank was split into so-called ‘good’ and ‘bad’ banks, with the operating bank network sold to Hellenic Bank, with a transfer of 75 branches and 1,100 staff, to make it the island’s largest retail bank. Hellenic also took control of €9.7bn in deposits, performing loans of €4bn, Cyprus government bonds of €4bn and €1bn in cash. 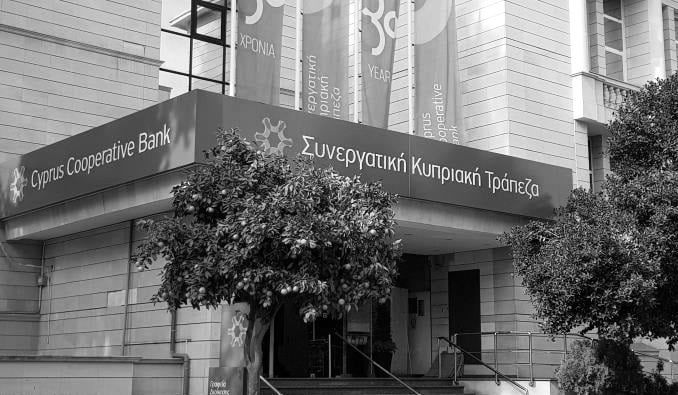 Most of the non-performing assets were handed over in October to a new institution, Kedipes (the Cyprus Asset Management Company), which became responsible for €8.3bn of assets, including €6.97bn in non-performing loans, plus €620m of fixed assets and €230m of shares in other companies, plus cash. Kedipes does not have a banking licence: the result of which was to substantially reduce the exposure of Cyprus’s registered banks to non-performing loans – which remains, though, at one of the highest levels of any EU member state.

Prior to the breakingup of the bank, a contract had been awarded to oversee the reduction in the size of the non-performing loan portfolio. In practice, this arrangement was unable to recover much. The reasons for the poor rate of debt recovery were several-fold: too many loans had been awarded to borrowers with insufficient resources to repay; the legal contracts for some of the loans were inadequate to enforce recovery; and it was claimed there were poor internal procedures in overseeing debt recovery. In addition, complaints were made of insufficient competition and excessive political influence in the appointment of a new institution to oversee the largely unsuccessful attempt to reduce the massive volume of non-performing loans.

Similarly, there were allegations of political intervention and influence in the running of the bank, prior to its collapse. This included, it was claimed, political interference in seeking the writing-down and non-collection of 54 commercial loans, to communal councils, municipalities and some individuals. It was also alleged that loans had been improperly approved to friends and relatives of bank staff.

These allegations led to the establishment of the independent investigation, which examined the defunct bank’s corporate governance, decision-making processes, administrative competence and staff appointments. The committee was appointed by Cyprus’s attorney general Costas Clerides and led by George Arestis, a former supreme court judge in Cyprus and, for 10 years, a judge at the European Court of Justice in Luxembourg.  He was joined by two senior bankers, Giorgos Charalambous and Giorgos Georgiou. Evidence was given by senior staff at the Cyprus Co-operative Bank, including former CEO Marios Clerides, and Central Bank of Cyprus governor, Chrystalla Georghaji.

One of the main targets for criticism at the inquiry was Cyprus finance minister Harris Georgiades, leading to opposition parties calling for his resignation.  Georgiades was accused by auditor general Odysseas Michaelides of failing to properly inform government ministers and the Single Supervisory Mechanism about the chances of success for a proposed rescue plan.

This potentially involved donating a quarter of the shares in the bank to its depositors, with the balance of shares floated on the stock exchange. While the government continued to believe this was a viable option as the basis for a rescue, the SSM regarded the plan as impractical and understated the need for a large injection of additional cash. It was alleged that this confusion caused delays to effective action being taken to resolve the bank’s crisis and was ultimately the reason it could not be rescued.

Central Bank governor Chrystalla Georghaji told the inquiry that she had written to Cyprus President Nicos Anastasiades suggesting the removal and replacement of senior executives at the bank as she no longer had confidence in either the management of the bank, or its conduct in reducing the size of its portfolio of non-performing loans. She added that politicians had not wanted to take the radical step of intervention.

The Cyprus Co-operative Bank was regarded by the European Central Bank as a systemically important institution in terms of the eurozone and Cyprus, so was being supervised by the SSM. It appears, from the evidence to the investigation, that the Central Bank believed that this meant it did not itself have the powers to instruct the bank to make executive changes. Georghaji told the investigation she passed on her concerns to the SSM.

President Nicos Anastasiades spoke to the media, responding to Georghaji’s evidence. He complained that she had not formally or adequately briefed him on the crisis of the bank when there was still time to save it.

In the end, there is a consistent story of blame-passing. Decisive intervention to save the bank never happened: yet earlier political intervention to influence lending practices and debt forgiveness helped to sink it. Once a bank – co-operative or not – is subject to political rather than commercial direction, its death is probably unavoidable.