Co-utility takes a novel look at ideas of mutually beneficial collaboration, asking where selfish behaviour might fit into such systems.

The book argues that protocols based on mutually beneficial co-operation can improve social welfare. It describes the concept of co-utility as a framework for co-operation between rational agents so that they help each other achieve their best outcomes.

Domingo-Ferrer and Sánchez give the examples of peer-to-peer networks for sharing of distributed resources or virtual money as incentives to achieve self-enforcing collaboration. 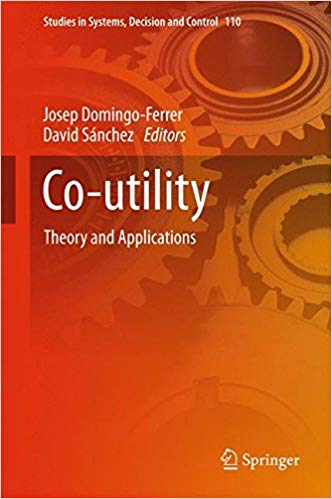 Co-utility is reminiscent of co-operative game theory. But this model is based on the assumption that each agent acts autonomously and keeps to themselves the payoff they get, rather than dividing it among the agents of a coalition, as happens in co-operative games.

Where could this model be applied? Imagine web search engines that are based on a co-utility protocol for exchanging queries between users. In the collaborative economy, such a protocol could help to introduce artificial incentives like distributed reputation or quality of service. Reputation management would also need to be designed to be co-utile.

A file-sharing system only works if agents share files, rather than simply downloading other agents’ files. But by incorporating rewards in the form of artificial utility, such as reputation, the problem can be tackled.

The authors add that co-utility principles can help to design a mechanism which ensures that helping others is the best rational option, even for
selfish players.

Book review: We have values - but how do we act on them?
Previous