'We’ve never been afraid to try new things and adapt to change, and our story involves so much more than simply selling food'

Founded in 1868, the East of England Co-op is celebrating its 150th birthday today, 3 March. The retailer can trace its roots to local people in the region coming together to set up a shop selling quality food at affordable prices.

Today’s society is an amalgamation of smaller societies from across East Anglia, including the Clacton, Coggeshall and Maldon societies. Now East of England has over 230 stores and branches across Suffolk, Norfolk, Essex and Cambridgeshire, over 4,000 employees and 288,000 members.

“For 150 years we’ve been looking at the small things we can do that will make a big difference,” said Minnie Moll, joint chief executive. “We’ve never been afraid to try new things and adapt to change, and our story involves so much more than simply selling food.”

East of England’s story includes supporting refugees, from the Spanish Civil War, ongoing work as a dementia-friendly retailer and championing local producers in its trading region through its Sourced Locally scheme. In 2018, it became the first retailer in the UK to sell food beyond its ‘Best Before’ date in a bid to cut food waste. 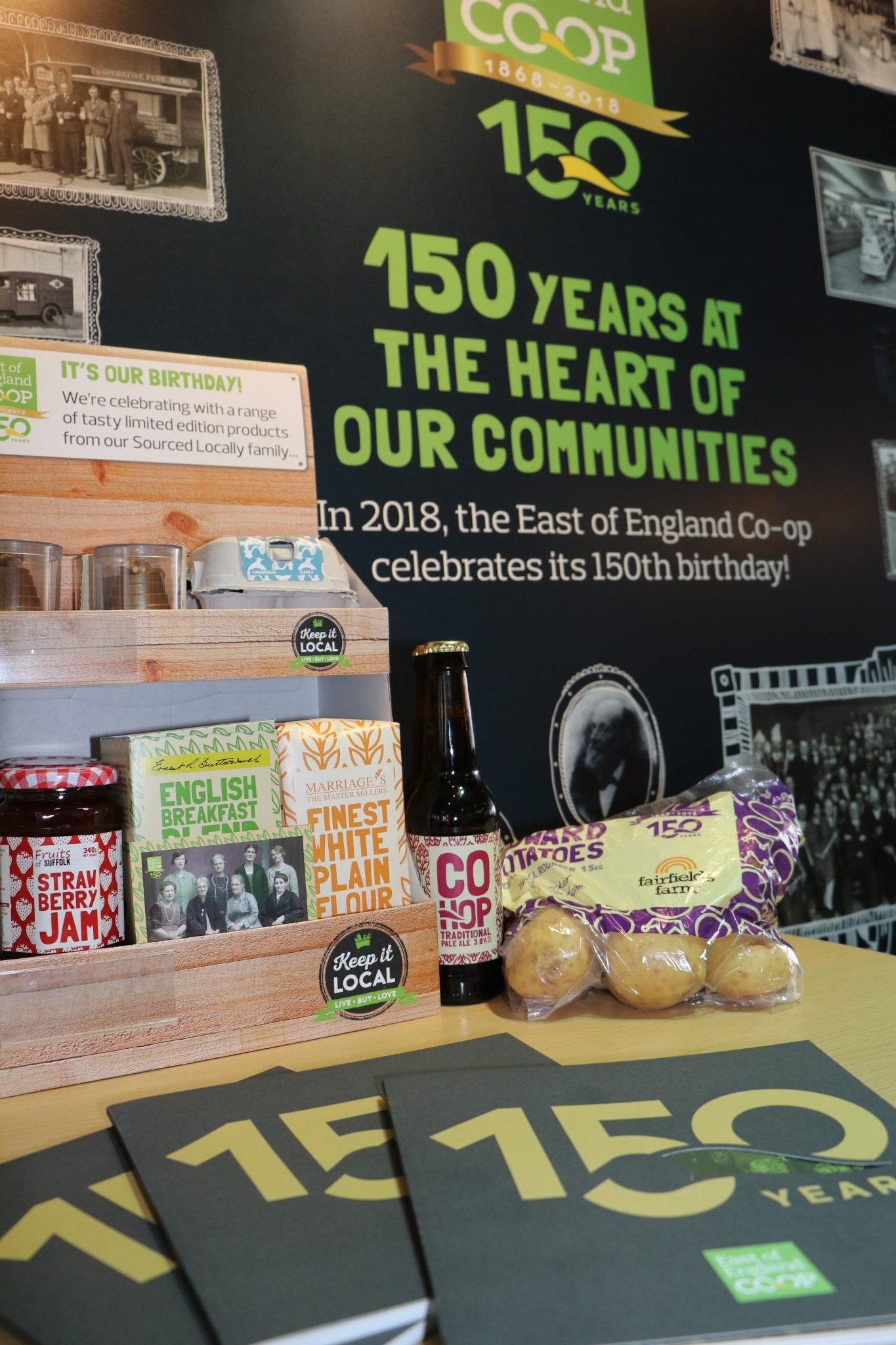 As part of the celebrations, the co-operative has partnered with its Sourced Locally producers to create a limited edition range of products, from eggs, sausages and flour, to beer, chocolate and tea. It is also asking members, customers and colleagues to share memories, photos or memorabilia of their time with the Co-op.

“We’ve supported our colleagues and communities through two world wars and rationing, seen five coronations, a millennium, and the birth of television, computers and the internet,” added Ms Moll.

“Through all that change we’ve continued to innovate and adapt, and in 2018 we’re proud to still be at the heart of the communities we serve.”

Roger Grosvenor is joint chief executive at East of England. Here he shares some of his memories of his time with the society…

What was your very first experience of co-operatives?

When I was 17 I joined the Co-op and while it was a great opportunity, as they also educated you in those days, the fierceness of the store managers was something to behold. They held great sway over the running of their branch and were sticklers for good standards, time keeping and hard work which stood me in good stead for my progression.  I will always be grateful for the old task masters as they taught me a lot.

When did you begin working for the co-op – which one was it?

I started working for Co-operative Retail Services, now the Co-operative Group, on 20 March 1972, 46 years ago, as a trainee manager in the food division, working out of Trinity House in the middle of Worcester.

What is the biggest change over the years?

The impact of competition against all the family of businesses and the loss of big sectors that the Co-op was strong in. For example manufacturing, dairy, pharmacy and department stores.

How did your journey from shop floor to joint chief executive go?

Fantastically well. From starting on the shop floor at 19, by 22 I was a store manager. Three years later I was an area manager and seven years after that I found myself in the position of food trades officer for the then Norwich Co-operative Society. At 42 I was a retail controller followed by joint chief executive at 54 years of age. From baling cardboard to the board room.

What’s your fondest memory or favourite story from your time at East of England?

My fondest memory was the first Sourced Locally Supplier Supper, when in excess of 240 suppliers joined in celebration of what we had jointly achieved in bringing local food to the plates of those living in East Anglia. The whole event was more akin to a family wedding than just a supplier function.  There was true warmth and friendship in the room like I have never encountered before.

My favourite story was driving from our store in Saxmundham over to Aldeburgh, passing fields of asparagus only to find, when reaching our store, the product on sale came from Peru. We reacted very quickly to the opportunity to sell local asparagus and during the growing season, April to June, we sold 33,000 bundles against the normal 500 bundles from Peru, showing the strength of local.