Book review – A short history of co-operation and mutuality

Ed Mayo, secretary general of Co-operatives UK, takes a look at the ancestors of the Rochdale Pioneers movement

A short history of co-operation and mutuality provides an overview of co-operative and mutual initiatives that may have led to the modern-day co-operative movement. Written by Co-operatives UK‘s secretary general, Ed Mayo, the book acknowledges the risk of choosing one place as the start of everything that followed, tracing back the roots of co-operation.

When was the first co-operative or mutual? The spread of customer-owned co-operatives in 19th century Britain is well-known and celebrated. There are also precursors of co-operation and mutuality before this in countries right across the world. 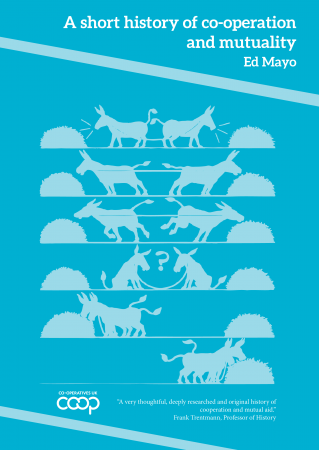 While arguing that the work is merely a sketch of the history of co-operation, Mr Mayo looks at the co-operative dimension of human nature. From mutuality in the Roman Empire through collegia, to craft guilds that existed across Europe in the medieval period, the book features various examples of co-operation across the world.

“There are hundreds of established histories of co-operative and mutual enterprise, whether biographies of individual businesses or analysis of wider co-operative sectors over time, national and international that point back to 1844,” says the author in his introduction. “They tell an inspiring story and the co-operative sector is proud of its history, but at the same time, I hope to offer a gentle challenge to the entrenched co-operative worldview of ‘1844 and All That’.

“My purpose is not to supplement or supplant the pioneers of Rochdale, by pointing to 1864 and the tradition of Friedrich Wilhelm Raiffeisen, the extension of these models outside of the circles of consumer retail and banking in which they started, or an earlier generation of weavers in the Scottish town of Fenwick in 1761. Instead, while fully recognising their achievements, I hope to acknowledge the risk of choosing one point or place as the start of everything that follows.”

The chapters include references to not only the Rochdale Pioneers, but also the weavers in the Scottish town of Fenwick in 1761 and the tradition of Friedrich Wilhelm Raiffeisen. It also looks at the commons, lending circles and labourer societies.

The book ends with an insight into the co-operative sector today. By describing the context in which these various co-operative ventures have emerged, the author argues that co-operation “is and always will be with us”. He adds: “There was co-operation before, and this is a short story of those roots of today’s
co-operation and mutuality.”