On her retirement as president of the International Co-operative Alliance, Dame Pauline Green was presented with the Rochdale Pioneers Award. The award, which was presented during the gala dinner,...

On her retirement as president of the International Co-operative Alliance, Dame Pauline Green was presented with the Rochdale Pioneers Award.

The award, which was presented during the gala dinner, recognises the contribution of innovative and financially sustainable activities that has significantly benefited co-operative members.

On the opening of the general assembly on Friday morning, Dame Pauline said: “I am genuinely honoured to feel part of a movement. Always difficult to say goodbye, especially to family and the worldwide co-operative movement has been like family over the past six years. I am very proud of what we have done together. I am full of hope for the future when I realise what we can achieve going forward, particularly when we work together.”

When Dame Pauline joined the Alliance in 2009, on the back of retiring as secretary general of Co-operatives UK, she was the organisation’s first female president in its 114-year history. “I feel humbled to be its first woman president,” she said at the time. “But we all need to acknowledge that since its inception co-operation has upheld equality between men and women as a key principle. Yet around the world, often, that equality is more noticeable in its omission than its commission.

“I hope our women co-operators take heart from having a woman president – and I can tell them that they will have all my support.”

Throughout her tenure, equality – including gender equality – played a huge part in her messages to co-operators throughout the world. “On this International Women’s Day in 2012 which is also the United Nations International Year of Co-operatives, I am asking co-operative businesses to follow that example and put more women at the core of their businesses,” she said three years ago, citing how in Rochdale, England (considered the birthplace of the modern co-operative model), co-operatives awarded women equal membership rights to men, at a time when women were still excluded from owning property. 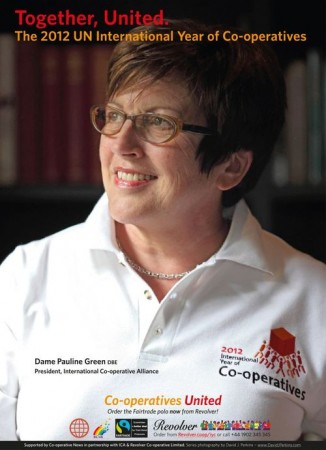 The 2012 International Year of Co-operatives (IYC) was itself a major feature of Dame Pauline’s time at the Alliance. International years are declared by the United Nations to draw attention to and encourage action on major issues. The IYC intended to raise public awareness of the contributions of co-operative enterprises to poverty reduction, employment generation and social integration, while highlighting the strengths of the co-operative business model as an alternative means of doing business and furthering socioeconomic development.

The IYC was announced by the UN in December 2009 shortly after Dame Pauline’s election as president. At that year’s ICA General Assembly she told delegates that “it is our responsibility to make sure we’re not only ready for that year, but that we maximise the value that it offers to us. This means we have to act now and we have to act with speed.

“We should prepare by making sure that we drive our co-operative visibility in to the decision-making global institutions and create a real sense of the strength and the values of the co-operative economy in the world.”

The year was a success, with a global launch taking place on 31 October 2011 at the UN General Assembly Hall in New York, followed by a calendar of conferences, forums and celebrations locally, nationally and internationally. During her keynote speech at the IYC’s closing ceremony, Dame Pauline declared a new era of co-operatives. “At this moment it is co-operative enterprises, that are so often the lynchpin of the real economy, keeping life going for so many at grass roots level in economies under stress,” she said. “Co-operatives can bring transformational change to the way business is conducted.”

Dame Pauline ended her speech by saying it was now up to co-operators from all over the world to work together to build a Co-operative Decade.

The Blueprint for a Co-operative Decade (2011-2020) is one of the long-lasting legacies of the IYC – a document that works towards making the co-operative model “the model preferred by people” and “the fastest growing form of enterprise” by 2020.

As part of this drive to increase visibility of co-operatives, the Alliance launched the Coop Marque, encouraging co-operatives to adopt a logo that was developed by and for co-operatives to create a universal identifier for the movement. “I think you can identify with it,” said Dame Pauline at the launch of the Marque during the Alliance’s 2013 Global Conference in Cape Town. “It says who you are – nobody else can use it.

“I believe that bona fide co-operatives who stick to their principles and good governance and member ownership should be using this to prove that they are a good, sound, co-operative businesses who subscribe and aspire to the principles of the global co-operative movement.”

To date, thousands of co-operatives in more than 100 countries have applied to use the Marque.

Above all, Dame Pauline’s time at the Alliance has been marked by obvious pride in a movement that spans continents, sectors, race and religion, and a commitment to ensuring the Alliance continues being equal, active and relevant. In an article for Co-operative News last summer, she highlighted the continuing need for co-operators to co-operate, and to take every opportunity to show the co-operative difference.

“As the global steward for the principles, the International Co-operative Alliance recognises that we need to make our case more powerfully, more frequently and more visibly,” she said.

“It is important that we collectively make a strong statement about who we are, because only then will the public recognise and understand the co-operative difference. Let’s be proud of who we are.”