The new public square at the heart of Manchester’s co-operative district has been named Sadler’s Yard, inspired by James Sadler, who made the first manned balloon flight in...

By Marie-Claire Kidd
Sadler's Yard has been named after James Sadler, who made the first manned balloon flight in Manchester in 1785

The new public square at the heart of Manchester’s co-operative district has been named Sadler’s Yard, inspired by James Sadler, who made the first manned balloon flight in Manchester in 1785.

Plans to open it on October 17 with a celebration of local food, drink and music were put back following a fire in the former Co-operative Wholesale Society headquarters. The official opening has been rescheduled for December 3.

Sadler’s Yard, which is between the CIS Tower, New Century House and the Co-operatives UK building, Holyoake House, is part of NOMA, a 20-acre mixed-use regeneration project on land owned by the Co-operative Group and Hermes Real Estate. The new name was crowdsourced from an open forum which called for suggestions from Manchester residents.

David Pringle, director of NOMA at the Co-operative Group, said: “We’re proud of the new name and believe that the people of Manchester will take it to their hearts. We plan to bring a series of enjoyable and interesting events to Sadler’s Yard from the end of the year and throughout 2016 and beyond.” 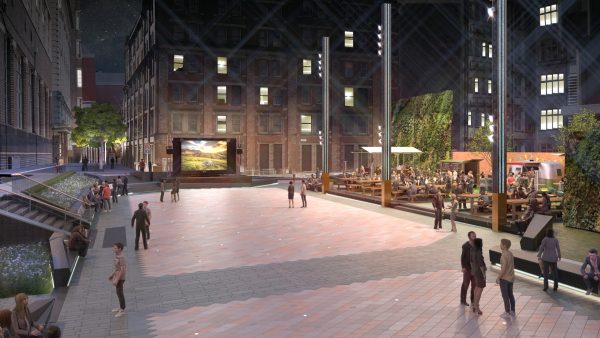 Sadler’s Yard has been delivered by NOMA and Manchester City Council with support from the European Regional Development Fund. Designed by Landscape Architects Planit-IE, and constructed by contractors Casey, over time it will develop to include cafés, restaurants, bars and shops.

A spokesperson for the Co-operative Group said the fire in the Hanover Building had ‘knocked us back a bit, but not affected our ambition.’ “Hanover is now back under the management of Wates Construction as investigations to determine what works of reinstatement are required,” they said. “The main areas of damage are to the sixth floor and roof on the E Block side, the former CWS drapery warehouse.

“We’re consulting with the City Council conservation officer to agree a methodology that protects and preserves the building in the best way possible before further minor demolition works take place. We’d like to say thank you to the Greater Manchester Fire and Rescue Service for their quick response and for ensuring the safety of the building for those working on and around it.”

The fire will defer completion of refurbishment of the Hanover Building. How long remediation will take and what they will cost will only be known following full investigations. The cause of the fire is also subject to investigation. “Sadler’s Yard will open to the public as soon as we can gain access to complete the work.” the spokesperson said.

Interview: Yochai Benkler on market solutions through shared resources and co-operation
Next
Subscribe to the newsletter