Robotics co-op looks to the future with Kickstarter campaign

An American co-op is taking the co-operative sector into an exciting new world by developing open-source robotics technology. “Robotics, in essence, is the connection and interaction of code with...

An American co-op is taking the co-operative sector into an exciting new world by developing open-source robotics technology.

“Robotics, in essence, is the connection and interaction of code with the real world around us,” says Nicholas Bold, worker-owner at Neuron Robotics.

In 2014, four friends found a gap in the market for a powerful, easy-to-use, modern and inexpensive device that connects code to the real world, so together they created the Bowler Operating System, a suite of products that makes the design and manufacturing of robotics simple and accessible for hobbyist and professional robotics.

They do this using the USB DyIO (Dynamic Input Output), an open source robot controller you talk to using the programming languages Java/Groovy, Clojure or Jython. The DyIO connects with motors and sensors and provides this feedback to the Java-based software BowlerStudio, a robotics design and development suite. 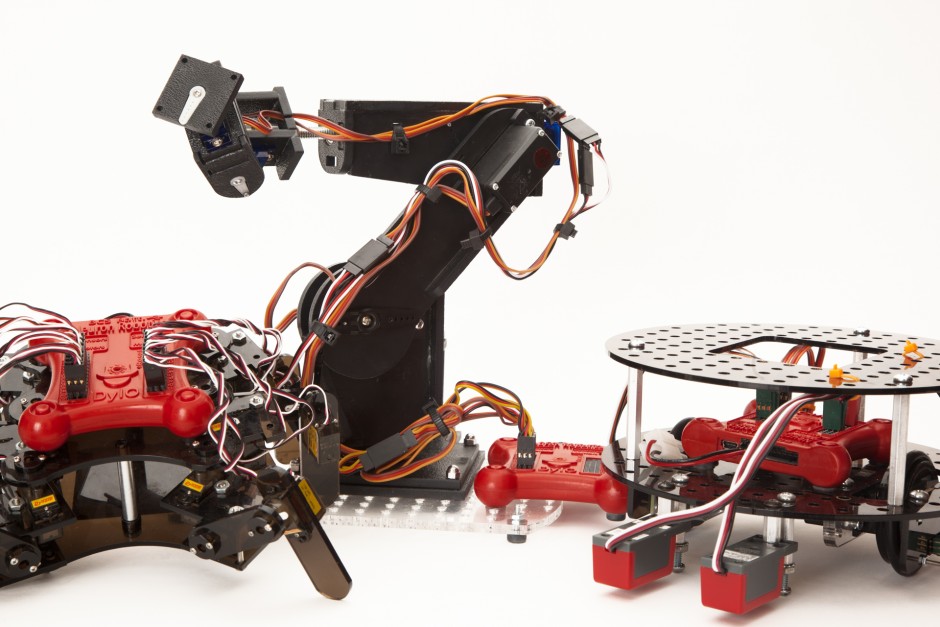 Through a USB computer connection, it is able to send sensor information to, and receive motor commands from, any connected application, and lets you begin to turn the robots you see on screen into real robots, by generating parts to be printed on a standard 3D printer.

As well as applying the technology to industrial contracts and community and educational programmes, Neuron Robotics has also been working with Prof. Gregory S Fischer, faculty member at Worcester Polytechnic Institute in the robotics engineering programme and director of the automation interventional medicine robotics research laboratory.

Now, after years of testing and development, Neuron Robotics has launched a Kickstarter crowdfunding campaign to raise USD $35,000 (£23,000) to manufacture the second generation wi-fi-based robotics, to refine BowlerStudio and create new creature apps as free updates to the Bowler operating system.

Co-operative News caught up with worker-owner Nicolas Bold at Neuron Robotics to find out more about the co-operative and why it chose the democratic model:

Rebecca Harvey: How did Neuron Robotics start, and why did you decide to form as a worker co-op?

Nicholas Bold: It started with Technocopia, the local makerspace, which was founded in 2013 by a number of people, including those who would later become the founders of Neuron Robotics. It would be fair to suggest that we worked to found Technocopia to help lower the operating costs and increase the opportunities of the later Neuron Robotics Co-operative.

Neuron Robotics Cooperative was founded in 2014 with four members, three of whom knew each other from school at Worcester Polytechnic Institute. The fourth original member was met through Technocopia. We would utilise the common tools and spaces, and the community, to make Neuron Robotics possible.

Later we would pick up an attorney as our fifth member, which became a huge asset.

We decided to run Neuron Robotics as a co-operative because our work in robotics had given us a glimpse of the future; specifically, as we realised that robotic labour competes directly with human labour. In an labour market, this is bad news for people who, in large, make their livelihoods by selling their labour. We did a number of contracts early in our history, before Neuron Robotics Cooperative was formed, one of which was an industrial contract in which we automated a series of tasks that had been done by people… who then lost their livelihoods upon the completion of our work.

This was devastating to us, that we would make our living by automating and eliminating the work other people did to support themselves.

As we sought answers, we started studying philosophy and economics, and eventually stumbled across worker-co-operatives, which, in the context of robotics, solved our ethical dilemma. In a traditional company, robotic labour is most likely to be applied in a way that competes with human labour, squeezing or eliminating the human labourers. In our worker co-operative, robotic labour is applied in such a way that elevates human labour and increases the amount of labour available to the company without requiring the worker-owners to work more themselves.

Today, Neuron Robotics focuses its efforts on making tools that make tools, so that more people and groups of people (for instance, co-operatives) have localised means of production that they can leverage to stay competitive in the economy.

In the USA, there are also significant financial and legislative advantages for a start-up to organise as a co-operative.

RH: How has being a worker-owned enterprise influenced the organisation’s development?

NB: We are relatively small, so we basically run most of our decisions democratically, as all five worker-members sit on the board of directors, and have weekly board meetings. We have a flat structure, and we delegate authority and resources to project leaders who then complete the task before relinquishing that authority back to the board.

We try really hard not to create any hierarchical structures, and to be good friends to each other. We started the co-operative so we could make a living together, not so that any of us would end up as the boss of the others.

But as we get larger, we have automated a number of tasks and created policies and procedures such that we can have more accountability and control over the organisation, which is necessary for us to effectively do business.

For the most part, we have a pretty awesome group of really talented people working hard, and intrinsically motivated, working almost exclusively on open-source open-hardware projects.

RH: Why do you think open-source technology is so important?

NB: Open-source is really very much akin to robotics. From the perspective that robotic labour is heading towards “zero cost” labour, open-source is “zero cost” know-how and entrepreneurship. This is everything from how to run and operate a business, to the actual designs and ideas that make up your product or service. I would put open-source into a larger puzzle as the macro economy heads towards zero marginal cost manufacturing, or post-scarcity.  To us, as roboticists, zero marginal cost production is the big goal of automation. Open-source really does facilitate that goal very well.

Open-source opened the door to us teaching ourselves how to build a business – it gave us the opportunity to have international developers participate on our projects. We’ve used open-source products to run our business, manage our finances, and so on. It has been, and continues to be an invaluable asset.

RH: How has Neuron Robotics technology been applied?

NB: Aside from robotic brain surgery, we have used our technologies in a number of formal and informal applications. We’ve done educational programs, teaching children CAD, programming and robotics, and have run these classes from ages 9-15 all the way up to college freshman at WPI. One of our worker-owners interned at Jim Henson’s studios, so we have done a series of robotic puppets too, akin to The Muppets.

We have also applied our tech to local humanitarian projects, including a robotic aquaponics greenhouse that will be deployed downtown to help feed under-served families.

There has also been a number of private industrial contracts, and we have developed a consumer version of our control system that we are trying to get out onto the market.

There has been some small interest internationally too, via the internet and our contributions to open-source. We would love to have our products be useful to people everywhere, they are designed specially to be useful to anyone anywhere. It’s exciting to see that be, at least partly, a reality.

• Click here to find out more about the campaign