Cows’ eye view of a co-op that joined Palestinian uprising

A documentary telling the story of the first Palestinian Intifada has been entered for consideration for the Best Foreign Language Film at the 88th Academy Awards. The Wanted...

A documentary telling the story of the first Palestinian Intifada has been entered for consideration for the Best Foreign Language Film at the 88th Academy Awards.

The Wanted 18 is an animated film showing how a group of activists in the town of Beit Sahour, West Bank, set up a collective farm to produce local Palestinian milk to substitute for dairy supplies from Israel. 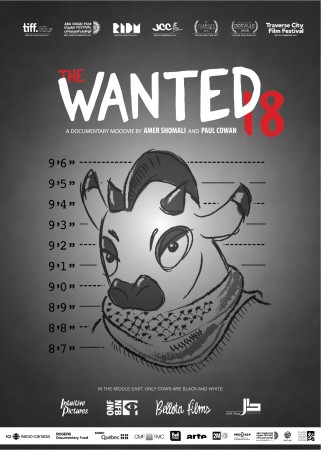 The locals, who were mainly academics and professionals, had no prior experience in running dairy farms. They decided to set up an informal co-operative and managed to buy 18 cows from a kibbutznik (an Israeli peace campaigner).

During the first Intifada, or uprising, of 1987-1993, Palestinians organised a number of boycotts of Israeli services and commodities – with many refusing to pay taxes – and buying the 18 cows helped the Beit Sahour group achieve dairy self-sufficiency.

The farm functioned as a co-op, collecting money from residents who wanted to become involved. Some members managed the operation while others handled milking and distribution. All members took part in decision-making at neighbourhood committees.

When the Israeli government declared the cows a security risk and sent soldiers and helicopters to the village to kill the animals, the residents took turns in hiding them.

There have been many documentaries about the first Intifada, but the Wanted 18 takes a different approach and is filmed as a modern-day fable. It blends testimonies from activists with animated segments in which the cows themselves become narrators. The animation gives a surreal edge to the documentary, says Canadian co-director Paul Cowan.

“The means of telling the story was what attracted me the most to the film,” he adds.

The film’s other director is Amer Shomali, a Palestinian visual artist-animator who heard about the story from a comic book.

At the time of the first Intifada he was a child in a refugee camp in Syria. It was only in 1996 that he was allowed back to the Occupied Palestinian Territories.

There, he found that the utopian collective community had disappeared and people had lost hope in the prospects of peace.

“It’s a dark story,” he says, “so if it is not told with a bit of humour people won’t listen to it.”

He says it is the animation which sets the film apart, and using the cows as characters makes the film accessible to those with no background knowledge.

“It’s easier for people to sympathise with cows, as a Trojan horse, than with Palestinians,” he adds. “People love cows – and by sympathising with the cows they start to understand what this community looks like in Palestine.”

Mr Cowan hopes the documentary will increase awareness about the first Intifada.

The collaboration was also marked by “two worlds meeting”, explains Mr Shomali. “We come from totally different backgrounds. I do comics, cartoons. Paul is North American, he looks at stuff from a western perspective and we have a different sense of humour.”

Paul Cowan adds: “Certainly no one on this side of the ocean has any idea what the Intifada is all about, certainly has no idea that there were 18 cows that had an important role to play in the Intifada.”

Both directors hope the humour will broaden the film’s appeal, helping to spread its lessons about civil disobedience.

“There is a lot to learn,” says Mr Shomali. “The younger generation is now stuck between two options: accept, and be an absolute victim of the occupation, poverty, capitalism; or reject all and be a radical lunatic fundamentalist or join ISIS.

Having grown up in Syria, Shomali finds it hard to talk about the country’s descent into civil war.

“I don’t know how to react to that,” he says. “Death is everywhere, many of my friends are still there, it is very sad.”

Asked whether the co-operative ideal could become popular in Palestine again, he says the world has changed and what worked then might not work now.

“The co-operative model disappeared and the whole initiative started to fade out.

“Young people think more of emigrating than making homeland a better place. But if we look at taking initiative and being creative, that would work,” he says, mentioning the example of a Fairtrade olive oil co-op in West Bank.

He hopes that the documentary can help change perceptions of the Palestinian people. In the film, the Israeli-raised cows are initially annoyed to be sold to Palestinians but become more sympathetic.

“In Canada and Europe, many don’t see this economic side of the occupation,” he says. “They don’t think of Palestinians as people who are educated, either.”

He takes a sceptical view of Palestine’s future. Its people cannot export goods and depend on Israeli authorities for products and commodities.

And while he thinks the dairy co-op proposed an alternative model 20 years ago, he is not sure it would work today.

There are a few dairy farms in the West Bank, but Palestinians have to buy cattle feed and breeding injections from Israel.

“All of this was part of the peace agreement,” he says. “They build settlements and we have to buy water from them. We only get water for three days a week, while they [those in settlements] have water any day of the week.

“It is not a fair peace agreement so it won’t last. Twenty years ago people saw that coming and were pessimistic about Oslo, so they knew what the future was going look like.”

Being chosen by Palestine for its best foreign language entry at the Academy Awards is “a great honour”, he says.

“It’s interesting that Palestine nominated a documentary – for the foreign language category they usually nominate fiction films with special effects,” he adds.

The film was due to have its official premiere in the US at the Human Rights Watch International Film Festival in June, but the event was cancelled when Mr Shomali could not attend. Israel considered the filmmaker a “security threat” and stopped him travelling to Jerusalem to obtain the US visa.

He has since had his visa approved at Amman in Jordan.

The Wanted 18 already has won several other accolades, including for best documentary from the Arab world in 2014 at the Dubai Film Festival.