Kenya The World Council of Credit Unions (WOCCU) has teamed up with a Kenyan school to develop an agricultural programme that encourages young people to look at agriculture...

The World Council of Credit Unions (WOCCU) has teamed up with a Kenyan school to develop an agricultural programme that encourages young people to look at agriculture as a means of income.

The initiative is part of WOCCU’s Future Farmer Schools pilot programme designed to attract students to agriculture and agribusiness and at the same time provide financial training to them. Children in primary and secondary school at Beverly School, Kenya, will also learn about market linkages, breeding, organic processes, crop rotation, genetics and the importance of irrigation.

“The World Council is proud to equip youth with the financial, business and agricultural tools that can benefit them, their families and their communities,” said Brian Branch, WOCCU president and chief executive. “Through the Future Farmer Schools program, we can increase youth employment in community-based farming.”

The idea for the project, named the Hornet Backpack Program, came from one of the co-op’s members, Yadira Chairez, who works for the Athens Independent School District. She heard about the co-op’s charity arm after having opened an account with them and applied on behalf of her employer.

When they join the co-operative, members can now choose to donate towards Operation Round Up, which finances initiatives such as the weekend food assistance programme. 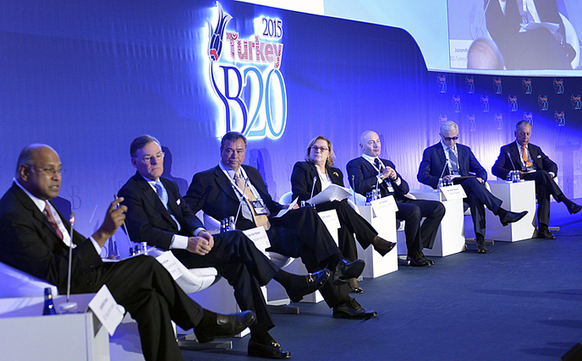 As key players of the business world are setting the agenda for the B20 Summit in Turkey, co-operators are also involved in the process. President of the International Co-operative Alliance, Dame Pauline Green, along with chief executive of the International Cooperative and Mutual Insurance Federation, Shaun Tarbuck, attended the opening meeting of the B20’s business advisory group in Turkey on behalf of the movement.

In his opening statement, the Turkish B20 chairman, Rifat Hisarciklioglu, highlighted the importance of strengthening co-operation between governments and the business world.

The Alliance is looking to build on last year’s historic breakthrough when co-operatives were represented at the B20 Summit for the first time.

Co-operators from across the world can now contribute to the 2015 edition of the World Co-operative Monitor. The Monitor gathers data on co-operatives across all continents, demonstrating the important role of co-operatives in the world economy.

The monitor is based on a survey designed by the International Co-operative Alliance in association with EURICSE. By providing data on the world’s top 300 co-operatives, the Monitor increases the visibility of the movement within the business world, policy makers and the public, and showcases best practices by highlighting successful co-operative models and innovative approaches.

The data requested for this year’s edition refers to the year 2013.

Last year’s monitor revealed that the top 300 co-operatives and mutuals account for USD 2,205.7bn in turnover.

More than 176 people have lost their lives due to recent flowing in Malawi, with another 200,000 being displaced. In response, the Co-operative Development Foundation of Canada has launched a fundraising campaign to help partner co-operatives affected by the flooding.

Both CDF and the Canadian Co-operative Association (CCA) have been collaborating with the Malawi Union of Savings and Credit Co-operatives (MUSCCO). According to Sylvester Kadzola, general manager of MUSCCO, two saving and credit co-op members have been severely affected by the flooding.

“Crops which have just begun to sprout have been completely destroyed on hundreds of acres of farmed land. It is clear that this year, we will have some serious food shortages in some parts of the country. It is too late to replant now,” Mr. Kadzola told CDF.

The East African Legislative Assembly has enacted a bill designed to promote the integration of co-operatives in the region. The East African Community Cooperative Societies Bill  sailed through the third reading, after being debated and amended by the members of the assembly. Public hearing on the bill had also taken place throughout September 2014 in EAC partner states.

“Today, is definitely a good day for the co-operative movement and this is very exciting news,” said Phillip Kiriro, president of the Eastern Africa Farmers Federation (EAFF), the organisation that drafted the bill.

“I have just returned from a stakeholders meeting in Ethiopia and everybody there expressed optimism. The long wait has finally paid off,” added Steve Muchiri, the Federation’s executive director.

The legislation will regulate co-operative societies at regional level and is expected to lead to more regional integration.

How well are financial mutuals really doing?
Next
Subscribe to the newsletter