Co-operative Group carried away with bag charge in Scotland

Good causes are set to bag more than just the 5p carrier bag charge levied by The Co-operative Group in Scotland. The community retailer has pledged to donate...

Good causes are set to bag more than just the 5p carrier bag charge levied by The Co-operative Group in Scotland. The community retailer has pledged to donate profits from its entire carrier bag range to good causes.

The Co-operative Group in Scotland expects this will raise £750,000 in the next 12 months. All the money will go to community projects in Scotland. It follows in the footsteps of its project in Wales, which has been donating the carrier bag levy to Wildlife Trusts Wales since 2013.

From 20 October, Scottish retailers are required to charge customers 5p for single-use plastic bags. But the Co-operative Group will add the money it makes on sales of its new woven reusable large and small shopping bags, and new fold-away bags, which are all £1 each.

It will also raise funds with its redesigned 10p bag for life and compostable carriers, available for 6p each from stores where councils have food waste collections requiring compostable bin liners. 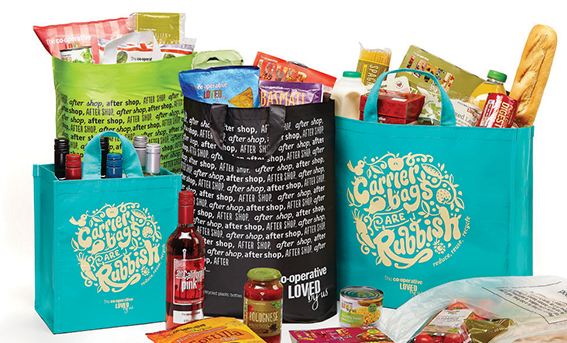 Regional stores director John McNeill said: “By going much further than we need to we’ll raise hundreds of thousands of pounds extra for good causes. It’s not just a commitment to local communities, though – we also have a strong commitment to the environment and we share the aspiration of reducing the number of single-use carrier bags.”

The Co-operative Group will confirm which good causes can bid for the funding, and how they can apply, early in 2015.

In Wales, a 5p carrier bag levy was introduced in 2011 – since 2013, the Co-operative Group has been using this levy to support Welsh wildlife projects.

Sarah Philpott, from Wildlife Trusts Wales, said: “The Welsh Wildlife Heroes campaign is run by Wildlife Trusts Wales and funded entirely by the money collected from the single-use carrier bag charge in The Co-operative Food stores. Over £1m is shared between grass-roots environmental projects across Wales as part of a three-year partnership.

“Welsh Wildlife Heroes is supporting native species and improving habitats for some of Wales’ rarest wildlife, and empowering the people of Wales to become wildlife heroes in their gardens or local communities.

“The projects are creating homes for barn owls, bats, red squirrels and reptiles. Staff and volunteers are also working with schools and community groups to help them create wildlife friendly gardens, public spaces and window boxes.”