The second part of novelist C.A. Hope’s trilogy about life in New Lanark’s cotton mills, the scene of early social reforms which inspired the co-operative movement, follows the...

By Anca Voinea
C.A. Hope signing a copy of the book for Prof Donald Pitzer, Director Emeritus at the Center for Communal Studies at the University of Southern Indiana

The fictional New Lanark – Living With A Visionary, is set in a troubled time for Britain’s mill workers, when the Napoleonic wars disrupted the cotton trade. Inspired by historical events, it follows the work of Owen who, at just 28, becomes senior manager of the country’s largest cotton mills – and sets out to revolutionise working practices.

It is the sequel to New Lanark – Spinning New Lives, which intertwines the story of mill workers the Scott family with the life of Owen’s father in law, David Dale. Like Owen, Dale was concerned with the well-being of the community – although he was inspired by his religious beliefs while Owen, an atheist, was driven by his idealism.

Ms Hope was inspired to research the trilogy when she was working in New Lanark, now a UNESCO world heritage site, for the Scottish Wildlife Trust. She began with David Dale because she felt he had been “overlooked”.

The novel moves on to Owen’s time, when around 2,500 people lived in New Lanark. As a Welshman and an atheist, Owen is greeted with scepticism by New Lanark villagers on his arrival in January 1800. 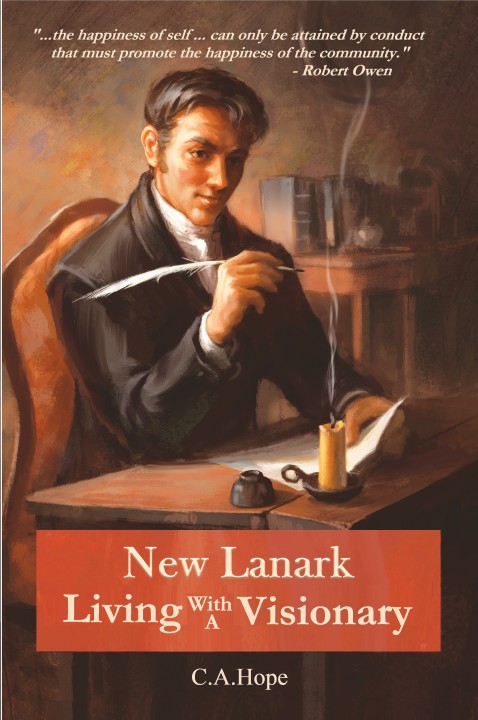 d to war, Owen comes under pressure from his directors, who wanted the mills to produce more. The novel reveals his struggle to please investors while enforcing his reforms; he argued that by providing better conditions to mill workers, they would produce more.

The positive impact of his reforms gradually challenges the villagers’ reluctance to change. These reforms include opening a school for the children of New Lanark, a new home for orphans, and refusing to allow those under the age of ten to work in the mills. Owen also renovates some abandoned rooms, offers more space to families and imposes a new regime of hygiene. Concerned with the quality of food the villagers could afford, he decides the company would provide groceries for them.

When investors refuse to continue financing Owen’s projects, he has to decide whether to keep his job and end his reforms – or leave New Lanark and take on a new challenge.

Ms Hope is now working on the third part of the trilogy, which features philosopher and social reformer Jeremy Bentham, who wants to invest in the New Lanark mills. An advocate of the concept of the welfare state, Bentham was the founder of modern utilitarianism, a moral theory according to which the value of the consequences of an action is determined solely by the welfare of individuals.

In 1814, he came in as Owen’s partner, and called for free education, guaranteed employment, a minimum wage, sickness benefit and old age insurance.

The novel will also continue the story of the Scott family and introduce us to Owen’s son, Robert Dale Owen.

Ms Hope’s research took her beyond New Lanark; after going through the resources on David Dale at Glasgow library, she was able to retrace his steps through the places he visited; she also visited the Robert Owen museum in Newton.

The book was launched in New Harmony Indiana, USA, where Owen tried to create a new model community based on co-operation – and Ms Hope met some of his descendants at the event.

“They received it very well and were fascinated by the fact that it was being put into the context of what was happening in the world, the war with France and difficult financial context,” she said.

“I hope my books will provide readers with the background and understanding of this truly enlightened man.”

Robert Owen’s social reforms provided a source of inspiration to the co-operative movement. The last of the trilogy – New Lanark – in Search of Utopia, will be out in October next year.

The second book of the trilogy can be bought online.