Working with other co-ops to promote your identity

What do energy co-operatives, credit unions and consumer co-ops have in common? They have all found common ground as a co-operative business by getting behind a unique identity....

What do energy co-operatives, credit unions and consumer co-ops have in common? They have all found common ground as a co-operative business by getting behind a unique identity.

With a defragmented co-operative grocery market in the UK, independent retail societies with many different facia came together to launch a common brand, named ‘The Co-operative’.

Set up by the largest retail society in the UK, the Co-operative Group, the brand was needed to bring the co-op’s own businesses (which at the time included food, travel, pharmacy and funerals). “In 2004 we had 13 million customers trading with our combined businesses, yet only 10% used more than one of them,” said the Group’s brand guidelines. “And only 1% of customers had traded with three or more businesses.”

It added: “Because each business looked so disparate the collective Co-operative brand and what it stands for wasn’t understood by customers. So we were in effect diluting The Co-operative offer: our brand proposition.”

It also had the halo effect of being picked up by other independent consumer co-operatives. The new brand was trialled from 2005 at outlets of four major co-operative societies. And today it is successfully displayed above over 7,000 food, pharmacy, funeral and travel branches throughout the UK.

Prior to the brand trials the Co-operative Group’s corporate reputation index rating was -55. Following the installation of the brand, its rating jumped to +26 in one of the pilot areas. The UK average is 0 – and the identity went on to be recognised as one of the country’s Superbrands.

Inspired by the work in the UK, energy co-operatives in the United States launched Touchstone Energy Cooperative. The brand alliance brings together 749 individual energy co-ops across 46 states.

An advantage of joining the group is the pooling of resources. Advertising images, education and training tools, member benefit programs and web development resources are just some of the tools available for members.

It has, in effect, created a national corporation that covers 75% of the US, with two million miles of power line serving 32 million members.

In rankings compared to other electric groups, Touchstone scored 81 points according to the American Customer Satisfaction Index. Meanwhile other investor-owned utilities were rated 75, while municipal-owned scored 72.

In 2014, the Credit Unions of Ontario saw the benefits of speaking with a common voice. Across the Canadian province, there are over 100 of these financial co-operatives serving 1.4 million members.

What’s important is that each credit union retains its identity too, but by building an awareness campaign it is reaching residents across Ontario with the message of co-operative banking.

“Co-operative banking is based on the idea that profits should have a higher purpose,” says the marketing material. “They should be returned to you in the form of great rates and better service. And they should be put back into the community where you live to do good.”

The credit unions decided to come together because just 11 per cent of the population bank with a credit union. That awareness is low was acknowledged by Stephen Bolton, president and chief executive of Libro Credit Union, speaking on behalf of the Credit Unions of Ontario.

“Credit unions have taken home the Ipsos Best Banking Award for overall Customer Service Excellence for nine consecutive years, yet our survey shows that we are still the best-kept financial services secret in Ontario,” said Mr Bolton. “We intend to change that by showing Ontarians that we represent a great banking choice – one that empowers them to make a difference in their lives and within their community.”

So three very different clusters of co-operatives have come together for a single need. To raise awareness of their difference. This is what the International Co-operative Alliance intends with the global COOP marque. 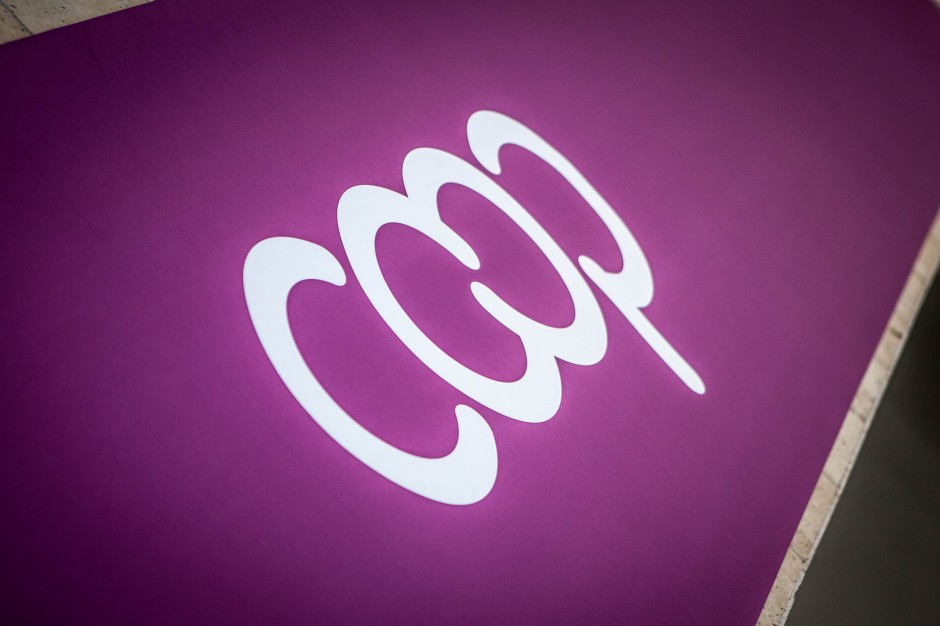 “The COOP marque is not designed as a main brand replacement,” explains Nicola Huckerby, guardian for identity.coop. “But that many co-operatives have pulled together resources to push out a single message shows there is an appetite for such thinking.”

By simply promoting the co-operative difference through the COOP identity, the Alliance is aiming for the marque to become the most recognised ethical identity by 2020.

The challenge now for co-operatives is raising public awareness, which is not an impossible task, says Nicola Huckerby. “We have already seen movements such as Fairtrade successfully tackle this. It has taken a good decade for the public to be fully aware of what the label means.

“At the Alliance we are certainly in this for the long-haul, but look forward to the day when the co-operative difference makes a tangible difference in the way consumers shop.”