Australia An interim review of Australia’s welfare system was released by the federal government, noting the role co-operatives and mutuals can play in improving outcomes in disadvantaged communities....

An interim review of Australia’s welfare system was released by the federal government, noting the role co-operatives and mutuals can play in improving outcomes in disadvantaged communities.

The review, A New System for Better Employement and Social Outcomes, establishes four pillars of reform and includes co-operatives and mutuals under the fourth pillar, “Building Community Capacity”.

The report said: “Mutuals and co-operatives have played a significant role over many years in building communities in rural and regional Australia. Co-operatives and mutuals are autonomous, economic organisations formed to meet the needs of their members. They are premised on self-help and empowerment rather than aid and charity. In developing intergenerational self-reliance, co-operatives help to reduce welfare dependency.

“Mutuals and co-operatives can play an important role in disadvantaged communities. With appropriate support they can be established to provide training and jobs, as well as goods and services for low-income people. They are a vehicle for social and economic participation for both individuals and communities.”

A six-week consultation period is now in process, which will help finalise a report with key recommendations.

Dame Pauline Green, president of the International Co-operative Alliance, has praised the strength of the co-op business model in Israel.

Attending a co-operative conference in the country, she said: “The global economy has a lot to learn from Israel.”

The conference examined how the co-operative business model could help build a more equitable society in the country, and commemorated the late Dr Yehudah Paz, who spent over three decades working towards peace in the Middle East through the co-operative movement.

“Here in Israel I have seen unique forms of communal, social, and economic co-operation that I have not encountered anywhere else in the world,” said Dame Pauline. “I believe that many co-operatives throughout the world can learn from what has been created here.”

As part of her visit, she also toured co-operatives in the Negev and met with founders of Maraj, a co-operative of sheep breeders that was the first Bedouin co-op.

A civil servants’ co-operative union in Minna has distributed 21 cars to its primary co-operative societies to help members address the challenges of transportation.

The Union also intends to provide 200 tricycles and 50 motorbikes for members in rural areas.

At the ceremony, Union president Tamu Shuaibu Jagaba revealed that a Civil Servants Co-operative Village project is also being undertaken to provide housing for members. A training centre will also be established to help members gain new skills before retirement, he added.

The Union includes 80 PCOSs with more than 27,000 members, all employees of Ministries, Departments and Agencies (MDAs) in Niger State Government.

Co-operatives bring together 1.5m Guatemalans and account for 23% of Gross Domestic Product (GDP).

In a country with a population of 15m, 35% of products exported from the country come from the co-operative sector.

According to the Confederation of Cooperatives, 861 active co-ops carry out activity in various fields. Agriculture makes up the largest part of this, with 42% of the co-ops involved in farming. The credit union sector makes up 23%, while consumer co-operatives are 12%.

Other sectors also highlighted are the fishing industry, housing and, more recently, energy.

Co-operatives have been named in high-level documents as a vehicle to help people move into secure employment.

The 103rd Session of the International Labour Conference looked at the transitioning of workers from the informal to the formal economy. “This is considered central to development, inclusive growth and inclusive societies,” said Rodrigo Gouveia, director of policy at the International Co-operative Alliance.

“Co-operative enterprises have a strong role to play in this discussion as many workers in the informal economy see them as an adequate framework to transition to formality.”

The proposed recommendation from the conference makes several references to co-operatives, including the statement that countries “should formulate and implement a national employment policy (…) in order to increase productive employment creation in the formal economy through (…) development of cooperatives (…) in both rural and urban areas.” 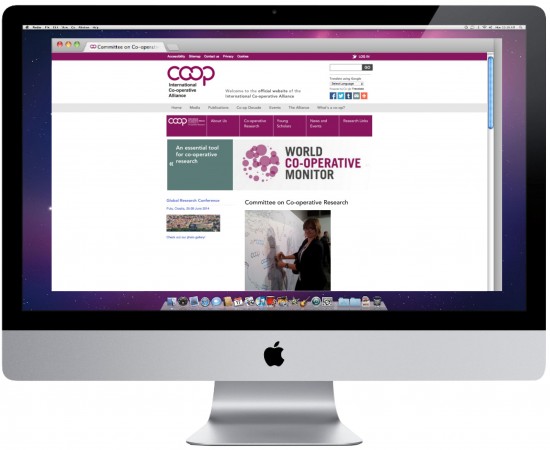 The CCR, chaired by Dr Sonja Novkovic of Saint Mary’s University in Halifax, Canada, is one of three thematic committees within the ICA. It aims to raise awareness of co-operative research and serves as a bridge between academic research and the co-operative world.

“We hope academics and practitioners will use this site to learn about the outstanding research on co-operatives that is taking place, find out about research-related events and get in touch with the people and organisations involved in co-operative research,” said Dr Novkovic. “The committee would like to thank the Alliance for its generous support in the development of this site.”

A split movement: supporters and non-supporters of the Co-operative Party
Previous

To grow the co-operative movement, we need to show – not tell
Next
Subscribe to the newsletter