Co-operatives are better at gender equality than the private sector, but there is still a way to go – agreed speakers at the Gender Forum at Co-operatives United.

By Emily Barker and Alan Peart
Polly Toynbee at the Gender Forum.

Co-operatives are better at gender equality than the private sector, but there is still a way to go – agreed speakers at the Gender Forum at Co-operatives United.

Three speakers including: Polly Toynbee, columnist for the Guardian, Katrina Lidbetter, from programmes and policy, Government Equalities Office and Agnes Bolsø, talking on the 40% quota law for women in boardroom in Norway, discussed the continuing fight for women equality in business.

Polly Toynbee said that the Co-operative Women’s Challenge, set up by Co-operatives UK was: “truly inspirational. I wish I could feel as confident about the direction the rest of society is taking at the moment.”

She added that women are “natural co-operators” and instinctively collaborate, but that some women interviewed in the Co-operative Movement still had a “certain degree of fatalism”, believing that men in the top positions are considered the norm.

Talking about the Equal Pay Act, put forward by Barbara Castle in the 1970s, Polly added that: “we really did think we’d won, somehow we imagined that changing the law, changes society, but it takes much more than that.”

However, there is still a pay gap between men and women, particularly prevelant in the private sector, as the public sector is now relatively equal. Women are often forced to leave jobs due to motherhood, and are unable to take on their previous positions part-time while raising a child.

Therefore they become more reliant on the state, and have been hit harder by the cuts. 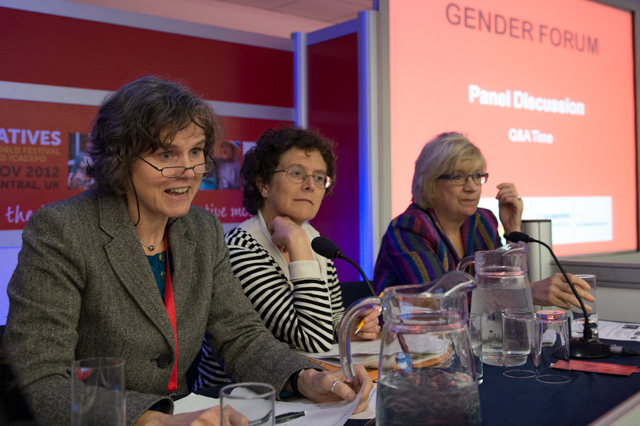 Karin Christiansen, the General-Secretary of the Co-operative Party, chaired the Forum. She said: “I have never thought of myself as a leader, its still an uncomfortable thing to say for a lot of women, but we know women’s leadership have huge amount to offer… We need the insights of women co-ops in the political realm more than ever – we need the quality of ideas.”

The discussion looked at barriers to women, particularly in the workplace.  Katrina Lidbetter, discussed women in work. She works on Think, Act, Report – where companies join and publish data on pay, and gender gaps.

She said: “The Co-operative Group has signed up to Think, Act, Report – I am hoping other co-ops will sign up – it sends a message to your customers and staff, good for buss and good for local communities – we think it fits well with the co-op values.”

Finally Agnes Bolsø, Associate Professor of Sociology, Norwegian University of Science and Technology, discussed the 40% quota for women in the Boardroom, which became law in Norway recently.

She explained that the issue, which underwent a number of arguments and debate, became about results rather than equal opportunity. This came from a Conservative Government, which was surprising.

However, the law is new, so they cannot tell what the results will be overall.

The Forum will continue with talks from the Woodcraft Folk and the Women’s Challenge.

What is Co-operatives United…and why are we going there?
Previous