Our highest honour ever

Dame Pauline Green, President of the International Co-operative Alliance, offers her congratulations on the award, together with South Africa's Deputy Minister of the Department of Trade and Industry, Ms...

By Peter Couchman
Dame Pauline Green, President of the International Co-operative Alliance, offers her congratulations on the award, together with South Africa's Deputy Minister of the Department of Trade and Industry, Ms Elizabeth Thabethe.I’m not often left speechless, but I was when I was informed that the Pl 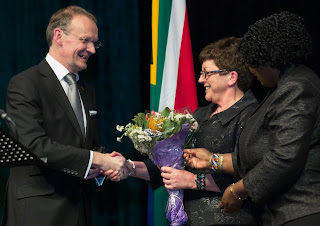 Dame Pauline Green, President of the International Co-operative Alliance, offers her congratulations on the award, together with South Africa’s Deputy Minister of the Department of Trade and Industry, Ms Elizabeth Thabethe.

I’m not often left speechless, but I was when I was informed that the Plunkett Foundation had been awarded the Rochdale Pioneers Award by the International Co-operative Alliance. It is simply the most prestigious award that the Co-operative Movement gives and had never before been given to an organization (the 13 previous laureates had all been outstanding individuals).
Collecting the award in Cape Town , in front of well over 1,000 people from 100 countries, was certainly a humbling task. This was added to by a congratulations message from the Prime Minister being shown on giant screens.
I said that the award was for three groups of people. Firstly, the amazing group of people that work for Plunkett now or serve on its Board. Secondly, the generations that had gone before us to make us what we are, outstanding co-operators such as Margaret Digby and Edgar Parnell. And finally, it was a recognition of Sir Horace Plunkett and his circle that created the Foundation.
As someone that helped to create the International Co-operative Alliance, Sir Horace would have been deeply moved to receive the award. He once said of the Foundation “If I can look back from the other world, I am sure I shall see what will greatly please me.” I’m sure that he was smiling that night in Cape Town.