Gordon Roddick receives the Citation from Kuapa Kokoo The Body Shop founders, Gordon Roddick and his late wife Anita, played one of the most crucial parts in Divine...

By Rosanna Mayhew and Co-operative News
Gordon Roddick receives the Citation from Kuapa Kokoo The Body Shop founders, Gordon Roddick and his late wife Anita, played one of the most crucial parts in Divine Chocolate‘s birth – not only by believing in and promoting this new kind of business model where farmers have a significant 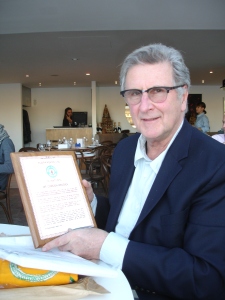 The Body Shop founders, Gordon Roddick and his late wife Anita, played one of the most crucial parts in Divine Chocolate‘s birth – not only by believing in and promoting this new kind of business model where farmers have a significant stake in the company, but in giving the real and immediate commercial support needed to get it off the ground.

Gordon Roddick continued to support Divine Chocolate, sitting on the Board for 11 years, and seeing his vision bear fruit.  He retired from our Board this year – and Kuapa Kokoo made sure of a fitting tribute to him to show the appreciation of the farmer members for his invaluable help and influence over so many years.

In true Ghanaian style, a citation was created for him – and it was presented to him on behalf of Kuapa Kokoo last week by Divine Chocolate’s MD Sophi Tranchell and our ex-Chair Sandy Balfour – both of whom worked with Gordon Roddick from the start.  Here is what Kuapa Kokoo said in tribute:

“If any organization could stand the test of time, then one of such organizations is Kuapa Kokoo.

The success story of Kuapa Kokoo would therefore be meaningless without the acknowledgement of your invaluable contributions.

Kuapa Kokoo would like to pay a special tribute to you and your late wife, Anita – for being a pioneer in advocating fairer trade with farmers, for establishing a long term contract with The Body Shop – and for having the vision to support and invest in Divine Chocolate Ltd. Being a giant in the movement to ensuring a better deal for farmers and producers around the world is an inspiration for today’s social entrepreneurs who believe business can be done better.

Because it was The Body Shop’s Mission to dedicate it’s business to the pursuit of social and environmental change, it was manifested in your decision to hand over all the Body Shop shares in Divine to Kuapa Kokoo.

Also, the alacrity with which you chaired the Board of Divine Chocolate and the possibility for the Body Shop to buy Kuapa Kokoo products at the Fairtrade price; and your long stay at the chair of Divine Board has attracted the compliment of the Board, Management and Staff of Kuapa Kokoo Ltd.

The dedicated service you rendered to the course of Kuapa Kokoo and Divine Chocolate vis-à-vis Fairtrade ever since our friendship is greatly appreciated.

Sir, the Kuapa fraternity salutes you!!!”

Terrible Fix, Farm Bill in "Uncharted Territory"
Next
Subscribe to the newsletter