Implementing the formula for co-operation

I'm always like posting guest blogs, here is a short article from Britta Werner, member of Unicorn Grocery and representative on the worker co-operative council. In June 2010,...

By Anthony Murray
I'm always like posting guest blogs, here is a short article from Britta Werner, member of Unicorn Grocery and representative on the worker co-operative council. In June 2010, I went to Plymouth to the Co-operative Congress. This was in the middle of the first Co-operative Fortnight. Prior to that,

I’m always like posting guest blogs, here is a short article from Britta Werner, member of Unicorn Grocery and representative on the worker co-operative council.

In June 2010, I went to Plymouth to the Co-operative Congress. This was in the middle of the first Co-operative Fortnight. Prior to that, I have already heard something about the ‘formula of cooperation’. I was a bit suspicious initially, a formula? For co-operation? It sounded a bit like an oxymoron to me. Co-operation should be a spontaneous thing, a bit of give an take but not like for like. 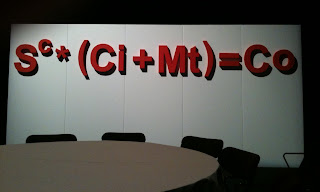 After Congress, I looked up what the abbreviations stood for:

Sc was shared commitment, yes, I can understand that. If at the time of the event, one of the parties is busy doing other things, then that would not really be co-operation. Ci stands for common interest, of course you would need that, if you are interested in different things, you would probably not get together in the first place.  Mt is mutual trust, I definitely have a lot of examples where co-operation doesn’t work because there is no trust.

So, I started to understand why those three elements had to be part of a successful co-operation (Co).

The paper is only 16 pages long, including appendices, notes and bibliography. It is written by Ian McDermott, with Jason Miller and Ed Mayo. It is a nice easy read and very accessible. Read it here.

Around the same time, the training team at Unicorn have asked me if I could do a training session on co-operatives. I agreed but was not sure what I was going to say. I really didn’t feel like talking about the Rochdale Pioneers or just randomly explain what we talk about when I attend the the worker co-operative council meetings. So I decided to tell my colleagues about the formula of co-operation.

I started of with quickly telling them about Ed Mayo’s paper Dog Helps Dog World which shows how important in all aspects of live it is to act co-operatively. Ed Mayo tells in that paper that we could reduce inequality if businesses were more co-operative and that climate change can be dealt with if we did not only care about ourselves.After giving my colleagues some food for thought, I then started to talk about the formula.

I reminded my colleagues about our principles and values and why we are all working in a workers co-operative. But how is this possible and how can we get better at what we are doing?

You and the other party/parties involved need to know that you want to help each other but you need to trust each other initially to establish that, but to make anything happen you need commitment and it needs to be mutual. All three elements create a multiplier effect, each multiplies the effect of the other two. Co-operation will be the result. However only if all three elements are present. The result will be rewarding and satisfying.
If any of these are zero, you will get a different result but not the satisfying achievement of co-operation.

The example of tennis players are given at some point in the paper but I preferred to be a bit mean to my colleagues and torture them with a recap of the recent world cup.

The German team, most players playing in co-operatively owned clubs, were at their best. All elements were present. The way they passed the ball, the way they showed trust to their fellow players. They were a team and they co-operated; they had the same interest: they wanted to win.

The England team on the other hand, were a group of individuals, worried about their careers in their clubs, they might have wanted to win it, but there was no real trust between them. Each player played for themselves. So, no co-operation and no success in the world cup.

Every good training session should have a little test to apply your just learned knowledge. I didn’t have to work hard for one because the ‘co-operation health check’ is already included in the paper. For all three elements are two statements each which describe what co-operation means. Each statement should then be marked on a scale of 1-5 of how true they are for the business.

Our staff are split into two groups for our training, one is attending training the other one is on the shop floor and vice versa. So I had to do the training session twice. When I did the health check, the first group, quickly marked all statements and discussed the points afterwards in a large group. The other group, however, immediately split into smaller groups to discuss it. This showed that co-operation can look very differently. Both groups had very similar answers and views about our business.

Good questions people in all kind of businesses should ask each other and their teams.
I concluded with pointing out how this formula can be used to help us making our business an even better place to work in. Most businesses will have some faults and once identified, the faults could be split into the elements of the formula and see what is lacking most. It might not work for every single aspect but at least it is a start.

When I came to the staff room in the evening, one of my colleagues has made this: 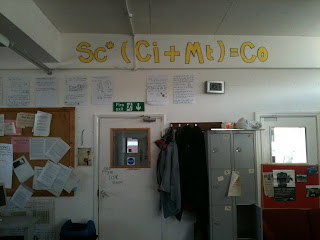 I can highly recommend this paper and if you have read it, then share it with your colleagues.

What's a social co-operative, can it help create a Big Society?
Next
Subscribe to the newsletter