Can we really create a co-operative economy?

All the talk at the moment is about public service co-ops and mutuals. How the co-operative model would be great for driving up performance, lowering costs, but at...

By Anthony Murray
All the talk at the moment is about public service co-ops and mutuals. How the co-operative model would be great for driving up performance, lowering costs, but at the same time keeping these new businesses accountable and lets be honest ethical. I agree with this generally and particularly if the

All the talk at the moment is about public service co-ops and mutuals. How the co-operative model would be great for driving up performance, lowering costs, but at the same time keeping these new businesses accountable and lets be honest ethical.

I agree with this generally and particularly if the employees get a real sense of ownership and control of their work life. But the question I’d like to ask Dave and George is: If its so great for the public services (especially in this time of budgetary constraint) why is it not a great idea for the rest of the economy and particularly those areas of high capitalism that got us into this mess in the first place?

I know a number of you must be thinking the same, in a recent SEC survey showed 2/3rds of people want more employee owned business in the private sector.

We are not the only ones who want to create a more co-operative economy either.  Fidel Castro at the other end of the spectrum admits Cuba’s centrally planned economy is not working and worker co-operatives should be promoted.(I find it slightly bizarre that a communist and a Conservative could agree on a economic model.)

Some people like the Basques in Mondragon and Emilia Romagna in Italy have been creating a worker co-operative economy on a regional level for years. Hugo Chavez in Venezuela is also a convert:

“When he took office, there were 762 co-ops in Venezuela with 20,000 members. Many of these were more credit unions than worker-owned cooperative work places. By mid-2006 there were 108,000 co-ops with 1.5 million members with half in the service sector and a third in production.
More information on his Bolivian Revolution here and here.

So creating a worker co-operative economy is doable, but is it doable in the England or the US?
Well some in the US are giving it a try; the steel worker union of America is looking to partner with Mondragon.  There is also an experiment going on in Cleveland to create a Mondragon like network of co-operatives, the first group of co-operatives are focused around The Evergreen Co-operative.

So is it achievable in the UK and what could it look like?
Co-operatives UK is releasing a paper (more of a tomb) written by Robin Murray who was heavily involved in the formation of the fair trade movement: Twin Trading, Cafe Direct, Divine Chocolate etc. Its called Co-operation in the Age of Google,

Co-operation in the age of Google shows that we are living at a time of profound transformation. The information and communication revolution, widespread concerns about private sector greed, public sector finances and impending climate chaos present a wide range of possibilities for co-operative expansion.

Robin argues the UK Co-operative movement is not yet in a position to make the most of these opportunities. It needs to be more innovative, more integrated, more internationalist, to get better infrastructure and to find ‘the idea’ that can mobilise support for co-operation. The review proposes a series of practical initiatives for 2011 and 2012 to strengthen the co-operative sector.

Have a read and in true co-operative style add your own comments, thoughts and ideas.

Another report released by MIT in October looks at Mondragon and the Evergreen Co-operative Model case study them and then create a theoretical framework for what creating a worker co-operative economy.


“The most important lesson from Legacoop and the Mondragon is the importance of developing an economically integrated network of cooperatives rather than a single cooperative.“

I’ve added a diagram from this report as it sums up their framework.But do have a read of that too. 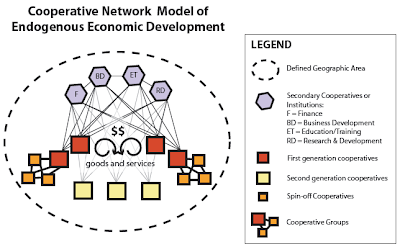 We live and vote in a country run democratically and we may well soon have a public sector run in a more democratic and mutual way.  Why should we not work in a business that is run in a democratic and co-operative way?

Lesson's from the dark side
Previous

What is an employee owned co-operative?
Next
Subscribe to the newsletter