From conflict to co-operation

Worker co-operative people are very aware that conflict can be an issue and over time can cause real problems. Conflict shouldn't be avoided, but equally you shouldn't revert...

By Anthony Murray
Worker co-operative people are very aware that conflict can be an issue and over time can cause real problems. Conflict shouldn't be avoided, but equally you shouldn't revert to "because I told you to" (even if you can). I always like posting guest blogs; and here is one from Kate Whittle a c

Worker co-operative people are very aware that conflict can be an issue and over time can cause real problems. Conflict shouldn’t be avoided, but equally you shouldn’t revert to “because I told you to” (even if you can).


I always like posting guest blogs; and here is one from Kate Whittle a co-operative developer of more than 20 years, who has recently written a series of publications for Co-operatives UK called From conflict to co-operation.
—

I was on my way to a meeting I expected to be very challenging a few days ago, and as I got off the train and started walking I noticed my knees were feeling wobbly – and I understood – it was adrenaline – my body was getting ready for fight or flight … (not really sure if wobbly knees are any use at all for either fighting or fleeing, but you get the picture ..)

So I started thinking what can we do when our physical body is reacting to a real or perceived threat – by flooding our system with adrenaline? How can we find a way to acknowledge the signal that the body is sending us, but at the same time adopt a stance in the confrontation that is going to give us the strength to insist on a negotiated settlement, rather than run away or engage in physical or verbal fighting?

I believe that having a recipe – such as the one that the book Getting to Yes gives us – can help us find that strength, and help us behave in a way that is most likely to produce a satisfactory outcome.

The recipe has 4 ingredients:

That’s why the approach is called Techniques of Principled Negotiation – and this handy little book should be on the shelf of every co-operative or community enterprise. The first third of the book explains these four steps in more detail, with examples. However the rest of the book concentrates on what happens when people won’t play – when they are more powerful, or if they use dirty tricks, the techniques are still useful, and will help you get as much as you can out of a difficult situation.

From Conflict to Co-operation is a series of five cartoon booklets from Co-operatives UK, the first book focuses on dealing with conflict and books 2-5 on preventing conflict. 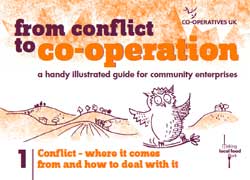 Will public sector workers fit in the co-operative movement?
Previous

Lesson's from the dark side
Next
Subscribe to the newsletter