Youth is not wasted on the young

On Saturday I went to the open day of #cocamp the 3 yearly international camp for the Woodcraft Folk and their associated international movements. So who are they...

On Saturday I went to the open day of #cocamp the 3 yearly international camp for the Woodcraft Folk and their associated international movements. So who are they and why as a member of a co-operative should you be interested?

Who are they?
The Woodcraft Folk, although a fully autonomous and independent organisation, is closely aligned with (and gets funding from) the co-operative movement basically the youth wing. I think they merged with the official youth wing back in the 40’s. For those interested there is a whole raft of heritage and historical documents here.

So they are a youth organisation like Scouts but without the woggles and all that stuff about God and the Queen.  They are democratically run by their members (anyone involved over 16), where children and young adults are taught about values such as self-help, co-operation and all those other words we love.

Why should you be interested?
This is the place we will get the next generation of co-operators from, they will want to work in worker co-ops, start-up the next Suma’s, phone co-op’s or (by the looks of the adverts/films on this site.) media co-ops. They will think of ways of democratically organising, using social networks and other technology we can’t even imagine.  The kids and young adults I spoke to were articulate, confident and instinctively  co-operated with each other.

The best example I saw was five bicycles pulling and another group pushing a “mobile DF’s centre” up a hill. (If you imagine a 3x3m wooden construction on wheels, with walls, a roof  and a 3 piece suite inside you won’t be far off.)

If we can get these people to move into the wider co-operative movement, help them grow and develop, the movement won’t just be in safe hands they will far surpass what’s been achieved in the last generation.

Cocamp has been running from Saturday 30th July to Tuesday 9th August 2011. In their own words from the website:


“The camp will be an opportunity for young people from across the world to learn about, and put into practice, co-operative values, with these values also embedded in the planning, organisation, and programme of the event“

Here are some photos from my visit to their open day: 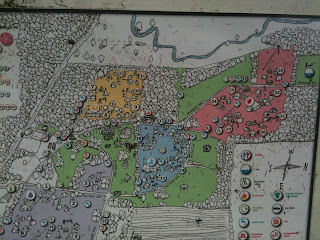 This is a picture of the map, the camp is split into Villages, which are a circle of tents where people camp, cook and organise together.

Villages are grouped into Towns for larger activities, each Town had a: Town Hall, Library and Cafe. There were four towns in all and roughly 2500 people on site from places as diverse as: Austria, Bangladesh, Indonesia and Bradford (the village I ate with).

I should mention Bob Cannell of Suma looked after me for the day, for which I was very grateful. 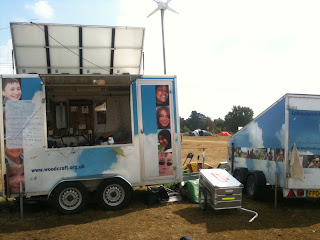 Here is a picture of a solar and wind power station in the Scottish Woodcraft town, there town was entirely powered by renewable energy. Although I didn’t spot them I noticed a Dulas (Welsh worker co-op) van in the car park, so there must have been a Welsh contingent some where as well.I saw groups from Bradford, Manchester (Chortlton), Hebdon Bridge, and loads from London. 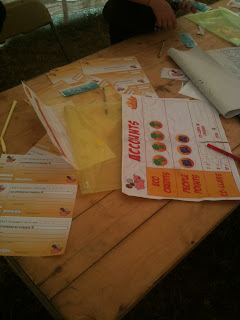 I also bumped into the Co-operative College  who ran a workshop on co-operative trading. Children learnt about co-operatives, fair trade and globalisation through running a trading game involving: a bank, diary farm, wholesaler, retailer, cafe etc.  See the picture.

Another Co-operative College activity was called “Co-op in a box”, where kids explored the co-operative values and principles and each box held items needed to produce things; from hair platting, friendship band, smoothly making and cake decorating.

The groups then decided what to do; how much to charge and then went about setting up their co-op (One kid I heard made £30). Interestingly there was some debate between the parents/leaders about what to do with the “profits” as some presumed the money should go to charity (so even the parents learnt something about true co-ops). Thankfully the kids did choose what to do with the money (it was their co-op after all).

It wasn’t all co-op stuff; here are some pictures of posters put around the camp for other sessions.  All the session were voluntary and the kids could decide what to go to (and quite a lot were their idea too). 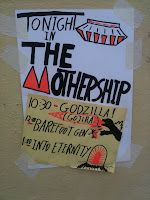 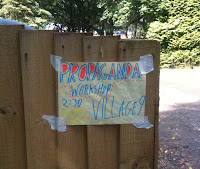 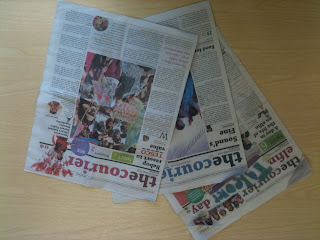 This last picture shows copies of the daily newspaper which was written and edited by the younger kids and members of the DF’s who are the 16 -21 yrs group.  Each evening the paper was sent to a local newspaper printers to be printed. First edition is here.

So if you have kids and you want them to grow up confident and able to co-operate why not look into sending them to the Woodcraft Folk.