What we could learn from French co-ops

Shame to see plans for SeaFrance to become a worker co-op have run aground.  This is despite having political, legislative and support structures that promote worker co-operative buy-outs....

By Anthony Murray
Shame to see plans for SeaFrance to become a worker co-op have run aground.  This is despite having political, legislative and support structures that promote worker co-operative buy-outs. "The cooperative, was to be financed by workers' standard lay-off  payments as well as "exceptional

Shame to see plans for SeaFrance to become a worker co-op have run aground.  This is despite having political, legislative and support structures that promote worker co-operative buy-outs.

“The cooperative, was to be financed by workers’ standard
lay-off  payments as well as “exceptional” cash of 60,000 euros per
worker, paid by SeaFrance’s parent company, state-owned rail form SNCF.”

Reportedly, not enough workers were committed to investing their lay-off cash in the co-op and the Trade Union was holding out for Government bail-out. Other trade unions representing SeaFrance personnel, and the national CFDT trade union, criticised the hard line stance of the local branch.

So 880 people will lose their jobs and probably the same again indirectly. As well as the reduction in services and competition in the market. I had a good grumble in my head about trade union intransigence (coal mines all over again), unviable businesses being forced upon the workers due to management failures… grumble …grumble….

But what struck me was, it even got to this point, Nicolas Sarkozy was in favour of the idea! Would this ever happen in the UK?

I know Nick Clegg and David Cameron talk about increasing employee ownership, but would this happen? and if it did how would the workers be supported to make a real go at success? Labour Governments have not had great success at top down saving of industries through worker co-ops. (Meridian Motorcycle Co-op)

Despite the situation with SeaFrance, France has a really good track record of worker co-op conversions and has a Government backed programme (both buying successful business from retiring owners and businesses rescues.)

Given the very large number of SME business owners expected to retire in France of the next few years this area has been a particular focus for the co-operative movement. There have been 70 enterprises converted to worker co-ops each year over the last few years. There is also a specific support network called “APERE” (Association for the Promotion of Enterprise and Takeover of Enterprise) which partners with CG-SCOP the worker co-op federation.

I’ve linked to this report before in relation to success factors in the Italian worker co-op sector, but there is also a section on France, well worth a read:

Bit of history:
In France, a worker co-op is called a “SCOP”, an acronym for “Société
coopérative et participative;”.

The French worker co-op movement dates back to early in the 19th century. A law passed in 1791, the “Chapelier law”, forbid workers’ associations, including worker co-operatives and trade unions. However during the revolutionary periods many worker co-operatives formed clandestinely. In 1878, the Administration repealed the Chapelier law, stopped the attacks and eventually became supportive.

Since 2007, approximately 200 new SCOPs have started each year through start up, recovery or business transfer and generated an average of 1,500 jobs per year since 2007. During the economic crisis although affected worker co-operatives have proved resilient as recent CECOP reports show.
At the end of 2010, there were 1 959 co-operatives a growth of 3.5% per year over the last 15yrs with survival rates after 3 years of 74% (average in France: 66% – source INSEE)

Success factors
Indivisible reserves
According to Patrick Lenancker, President of CG-SCOP (the national Federation), a significant reason that SCOPs have been so successful is they have substantial stable capital. A minimum of 15% of surpluses must be placed in reserves (in practice,it’s 40% to 45% on average) with the key advantage that the reserves are permanently owned by the co-operative, ensuring financial stability in the long term.

Like Italy and Spain the principle of indivisible reserves in worker co-operatives is strong (a bit like the common ownership worker co-ops of the 70’s like Suma or John Lewis being held in Trust on behalf of the workers).

This large indivisible reserve prevents the SCOP from being taken over by external parties; ensures the independence and sustainability of the enterprise in the long-term.

Positive Government and legislative environment
There is a recognised worker co-operative legal form with requirements: The re-investment of surpluses and indivisible reserves mentioned above. Also in a SCOP, the workers must have at least
51% of the capital, and 65% of the votes.

But worker co-operatives receive tax benefits from the French government. SCOPs do not have to pay the professional tax, which is 1.5% to 2.5% of revenues and income on worker shares is exempt from income taxes. There are also financial mechanisms for workers to use redundancy payments as part of wider financing package to buy-out and provide cash-flow for the business once they take it over.

Principle 6 in action with strong Federations and support organisation
One of the other requirements to gain SCOP status is to finance the worker co-operative movement. The membership fees are 0.42% of revenues. Interestingly that would be about £60,000 from current worker co-ops (Turnover around £150m) and £3.7m if you add employee trust owned co-ops like John Lewis. Imagine the support that could be offered to grow the economy if we had £3.7m! (anyway I digress).

SOCODEN (Société coopérative de développement et d’entraide) is a financial institution managed by the SCOPs since 1965 and offers equity loans and financing for working capital requirements.

Finally the sense of solidarity and mutual support between worker co-ops is high. CG-SCOP’s slogan is “A SCOP is never alone.” The “Confédération Générale des Scop” leads and coordinates the SCOPs network and represents SCOPs at the national level in France. There are thirteen regional unions providing day-to-day development, and representation at the regional and local levels. There are also three professional federations that represent the SCOPS in their sector and provide
economic, technical and legal advice.

Here is a diagram taken from www.les-scop.coop (your French is probably better than mine. 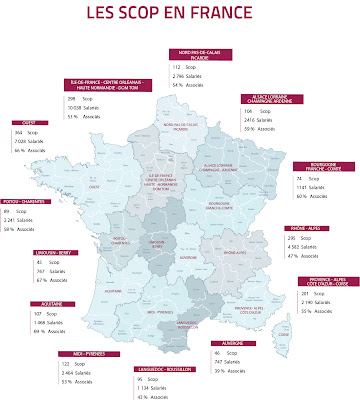 Nick Clegg more employee ownership
Next
Subscribe to the newsletter