By Adrian Ashton
17 October 2011
Indulging myself in some co-op history recently, I found myself reading an article in the Society of Co-op Studies‘ Journal from 1981 by Harold Campbell titled ‘Unity amongst co-operatives’.

Indulging myself in some co-op history recently, I found myself reading an article in the Society of Co-op Studies’ Journal from 1981 by Harold Campbell titled ‘Unity amongst co-operatives’.

In it, Harold showed the plurality of the co-op model and movement in how it’s defining values and principles were identified with by all manner of political bodies, philosophies and movements:

– to conservatives, co-op offer an expression of self-reliance and self-help

But I wonder if this apparent ability of co-ops to be identifiable with by everyone is also the reason why the co-operative movement will always struggle to realise its full [political] potential in reshaping the economy and society as whole? The movement is so large and multifaceted in that people see in those things that they hold to be most important to themselves only, and in doing so, re-enforce their prejudices about other political philosophies who also see the same movement as being entirely sympathetic to them.

It’s a bit like the story of 3 blind men who, upon encountering an elephant for the first time all believe its something completely different to each others’ perception of it because they only experience one part of it in isolation from the wider whole, and in doing so, all miss the bigger picture. 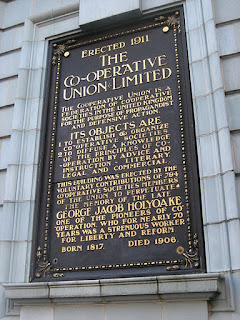 Perhaps we therefore need to agree a simpler strategy for the propagation and propaganda of the co-op movement and its ideals – we need to all agree on a single, over-riding issue or message about what co-ops are about, and then encourage all co-operatives to consistently relay this to their respective audiences. Maybe then, when everyone outside of the movement agrees on what co-ops are about on the terms of the co-op movement (rather than their own), we can get on with the more important business of fixing the world.

Honduras: Then and Now
Next
Subscribe to the newsletter