America's Credit Union Museum, in Manchester, New Hampshire, shines a light the birthplace of the US credit union movement

Perhaps less known to co-operators is the role of another Manchester – a city in New Hampshire, where the USA’s credit union movement first developed.

That Manchester is now home to America’s Credit Union Museum, based in the building where the country’s first credit union – St. Mary’s Cooperative Credit Association – opened its doors in 1908.

It was set up by a local pastor, Monsignor Pierre Hevey, to offer loans and savings for parishioners worked in the area’s mills. The building belonged to local attorney Joseph Boivin who served as the first president and housed the credit union in his home.

When setting up the credit co-operative, the two received support and guidance from Canada’s credit union movement leader, Alphonse Desjardins.

As well as celebrating the history of US credit unions, the museum will carry out research – in June, it launched the Credit Union National Association (CUNA) Research Center to help credit unions tackle modern-day challenges.

As part of the project, the museum renovated an unused building next door, using $3.3m donated by credit unions across the country. CUNA also contributed $1m to the Legacy Campaign fund, which will be used to renovate the main museum building, add new exhibits and digitise documents. 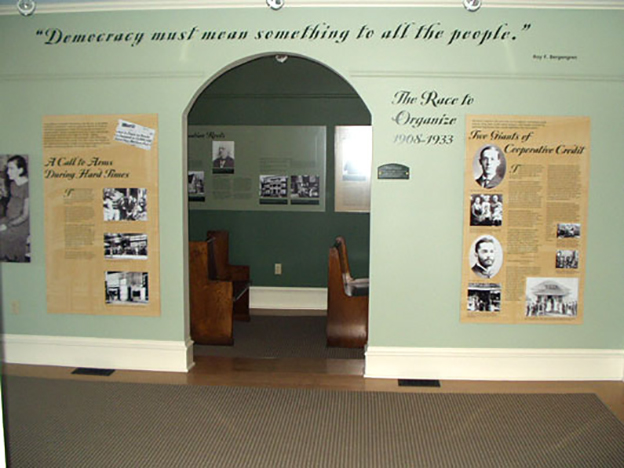 Speaking at the opening ceremony, Michael L’Ecuyer, chair of the museum and president and chief executive of Bellwether Community Credit Union, said: “Good trade associations are effective advocates for their constituents; great trade associations also develop and deliver relevant industry products and services to members. Exceptional trade associations do all of the above and while looking for opportunities to transform their industry. CUNA’s investment in the museum was one of those opportunities. For that we are forever thankful.”

Jim Nussle, president and CEO of CUNA, added: “Sometimes you go to a museum and all you care about is the past.  With the opening of the CUNA Research Center, it gives us the opportunity to talk about the future and to celebrate the innovative things credit unions are going to be able to do in the future. CUNA is honoured to be part of this.

“We invite all credit unions to come to the CUNA Research Center to celebrate history and to get ready for an exciting future.”

Mr Ensweiler told the event: “To see my name here is beyond anything I could have ever imagined. The spirit and energy I gave were because it was something I love.”

The museum also provides a state-of-the-art virtual meeting and conferencing system through which credit union professionals can gather to remember their past and prepare for the future.