What has caused the number of US worker co-ops to nearly double?

Ten years ago, there were around 350 worker co-ops in the USA. Now there are nearly 600, largely thanks to a perfect storm of economic and social change. This has been witnessed by the United States Federation of Worker Cooperatives (USFWC), the national grassroots membership organisation for worker co-ops, whose mission is to ‘build a thriving co-operative movement of stable, empowering jobs through worker-ownership’.

Executive director of  the organisation is Esteban Kelly, who came to co-ops through student housing co-operatives in Berkeley, California, before organising co-ops across Canada and the US with the North American Students of Cooperation (NASCO). He has since served on numerous boards including the USFWC, the US Solidarity Economy Network, the National Cooperative Business Association (NCBA-CLUSA) and the Cooperative Development Foundation (CDF), and is a  co-founder of the cross-sector Philadelphia Area Cooperative Alliance (PACA).

“My work day-to-day is weird,” he says. “We’re national and it’s a big country! We’re at the beginning of this major growth curve of worker ownership and worker co-ops becoming much more mainstream. I’m doing my best to figure out what I need to do at any given moment to tap into the right interests, resources and energy.”

USFWC has around 200 members – some are co-op developers or local networks, but most are individual businesses that are worker co-ops or democratic workplaces. “A few are start-ups, and we also have a new category for businesses that recently converted to becoming worker co-operatives. They have been operational in running their business for a while, but are really young and new to the idea of doing this in a co-operative way.”

Over the last decade or so, he has witnessed the number of worker co-ops in the USA grow exponentially. What has caused this?

“It’s not easy to put my finger on, so here are some of my own hunches,” says Esteban. “I think it’s one of these right timing / perfect storm kind of things. There was an alignment of enough weird things that sparked at a certain point.”

One of these things was a shift at USFWC itself. Founded in 2004, the organisation’s traditional power base was long-established worker co-ops which tended to be “more middle / upper middle class”, involving people who saw co-operatives “as an alternative, an opportunity to opt out of the traditional economy”.

“Within a few years of USFWC being formed, we saw the power of the co-op model to address all of the social, racial and economic issues that were motivating the beliefs, values and politics of our own different communities – but everyone was doing that outside of the co-operative sector,” he says.

“Then researchers who weren’t in co-ops but were part of our ecosystem, lenders who were starting their shift towards socially responsible impact investing, and community economic developers that were looking at different kinds of community, all started coming together with worker co-ops saying: ‘this

[co-op model] seems to have served white people really well. What about bringing some of this wealth and success to communities of colour, to immigrant communities, black and brown workers?’ So at some point, our culture started evolving and shifting around that.”

But diversity was at the core of USFWC from the very start. “Even at our founding conference, we were clear that our leadership was multiracial and that we were disproportionately supporting the leadership of people of colour, low income people, immigrants, women – and so we had this blended leadership at the beginning.

“Our national conferences [which are now held every other year] have always had this very intentional, very aspirational, very forward looking sense. We got out of the mindset that the work we were doing was to just to serve who we currently are. That mattered a lot as it meant that we had this bigger promise – our mandate is helping to bring about the vision that we know is possible for everyone who is using this model, at the same time as supporting and grounding the leadership of the existing co-operatives.”

Demographically, white worker owners are only the second-largest group within USFWC membership, at about 40%. “It’s 42-43% Latino and the other 20% or so is other people of colour, mostly black, and then maybe 5-6% Asian, including South Asia or Middle Eastern.”

A different way to do things

The 2008 financial crisis was a big catalyst, too, says Esteban. “When the collapse happened, there was suddenly a hunger for another way to do things. We started having people who were in thought leadership and positions of power saying ‘OK, let’s take a closer look at this co-op thing – and especially this worker co-op thing’.”

Around the same time, filmmaker Michael Moore produced the documentary Capitalism: A Love Story (2009) which profiled worker co-ops, including some of USFWC’s members. And then in 2011 Occupy Wall Street happened. “People were literally in encampments all over the world saying ‘Capitalism, that’s the problem. But what are the solutions?’ and sitting down, telling each other about co-operatives. And then the International year of Co-operatives happened in 2012. All of these things just built on each other.”

Throughout all of this, USFWC had begun to build its co-operative development wing, a nonprofit called the Democracy at Work Institute, to ensure that worker co-operative development in economically and socially marginalised communities was adequately supported, effective, and strategically directed. “This was able to capture philanthropic grants, and plug this into the engine of expertise and networks,” he says. “We were able to use that to run training institutes, and to build up a field of co-operative development that we realised was missing in our ecosystem. We needed more experts, more co-operative lawyers, more community organisers to understand this model – more people embedded in non-profits, to train them about the co-operative business model so they could become partners with us.” 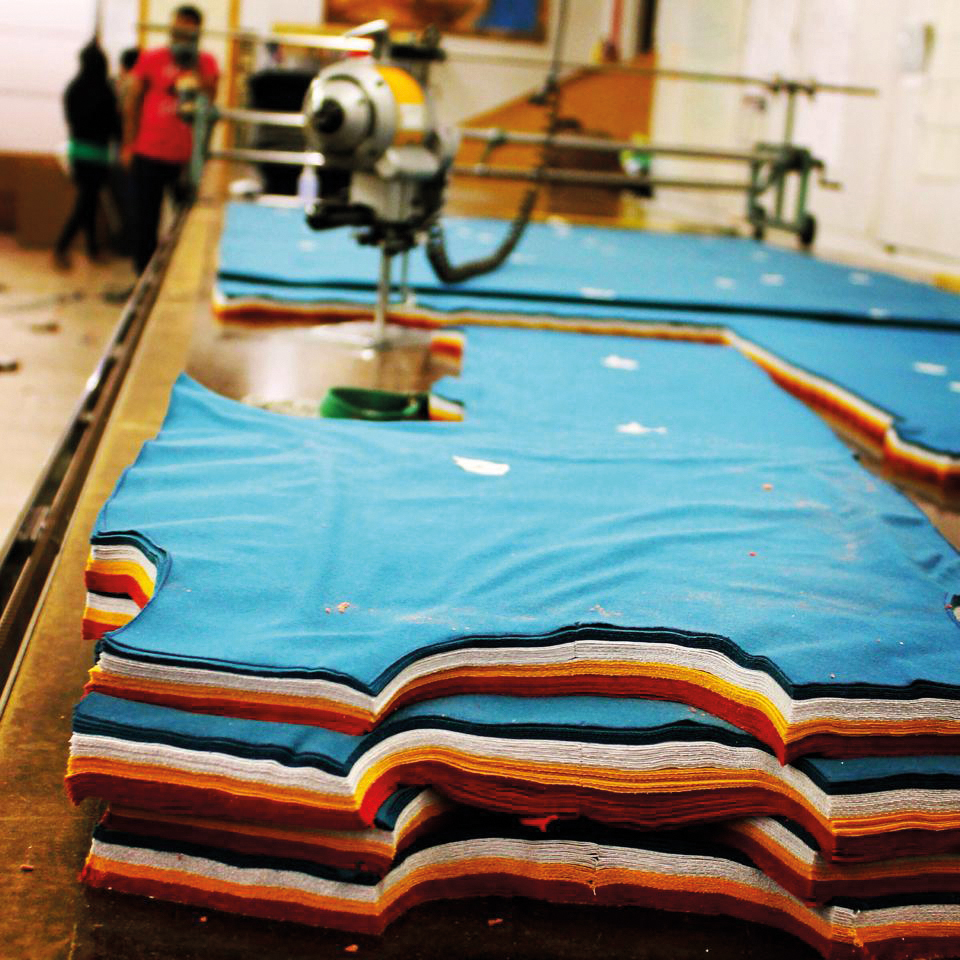 There was local growth, too. In 2014, Bill de Blasio was elected mayor of New York City under a mandate of left-wing populism. “Newly appointed staff, some of whom were friends of friends of friends of USFWC, were saying ‘I’m in a position of power, what can I do that would be helpful?’”

That was a game changer as more funding avenues opened up, with dollars flowing into an ecosystem that supports, incubates, trains and further develops worker co-ops. “We’re getting $3.8m this financial year,” says Esteban. “Our local chapter in New York has a bigger budget than we do because they’re able to tap into that funding, so they’re able to do a lot of programming and also raise the profile of worker co-ops. Now we believe there are about 80 co-ops in NYC alone. When this all started there were about 12.”

So how can the stories of all these hugely diverse businesses be told? Esteban believes that any kind of marketing has to be organic “in the sense that we can’t mimic what other businesses do, who focus on just one thing. We’re multifaceted. We’re in every sector. We’re organised in different ways, whether that’s worker-owned, or farmer-owned, etc, so we can’t be lazy like that. I think it means we need to be much more adaptive to audiences.”

He adds: “If you’re talking about worker co-ops and you’re targeting a millennial audience, maybe that story is about how co-operatives could be a better solution to the crisis of building a career, because of the dismantling of the traditional workplace. There’s a whole angle there of entrepreneurship and value alignment that speaks to the ‘millennial demographic’. So that’s one story – but it’s not the same story you’re going to tell to a baby boomer.

“We’re dealing with a very diverse sector. We’ve got everyone from engineers that are making car parts for Tesla, to immigrant workers who are cleaning homes, or driving taxis or landscaping. And of course everything in between, it really runs the full gamut. So how do you tell that story? Well, the answer is that it’s not one story.

“It’s about being able to find ways of being specific, highlighting people rather than the model, getting the stories of entrepreneurs or worker owners to build the empathetic hook.”

He gives the example of a brew pub: “People are interested in beer – that’s the hook. It’s sexy, they’re excited. We can say: ‘Here’s a brew pub that everyone’s excited about’. And because they are already excited, then we can talk about it being worker-owned and about it being empowering.”

It’s also about “sneaking co-operation into other places” instead of co-ops just telling their own stories, says Esteban. “We have started talking about how do we get people in Hollywood who are writers on shows to include background characters or sub-plots where someone is involved in a co-operative, or somebody sells their business to the workers, or something. It’s in science fiction too – Kim Stanley Robinson writes about that stuff all the time, as did Ursula K Le Guin.”

USFWC has also found some success and breakthroughs telling stories about what are traditionally thought of as conservative small business.

“[There’s a] myth that co-operatives are all alternative, leftist and progressive – sure they might be, and many of them certainly are – but they’re also not exclusively that,” he says.

“It’s important to also share the stories of co-ops which, for example, manage to stabilise rural communities that have fewer economic opportunities, like where some guy sells his hardware store to the workers and it becomes a worker co-op – now you have a rural co-operative in a conservative area where you have worker owners who feel empowered. They’re excited about it, so they tell the story themselves.”

He highlights the importance of telling “stories which aren’t just ‘we’re all progressive’ or ‘we’re all well-educated white radicals’ – but which also say ‘we’re black-run businesses’, and ‘we’re immigrant-run businesses’”.

It’s also important to “be able to include a counter-narrative,” he says. “So when people say ‘oh, all you do is in the caring economy – childcare and homecare – we can say ‘no, no, no, we also actually do this other thing’. Or they say ‘oh, you only do service-sector low-wage jobs’, we can say ‘actually we have high-end jobs too’.

“I think we need that nimbleness to help people expand the frame of what they think of as co-operatives.”

How to market community share issues? Insight from Triodos
Previous

Use the .coop domain to sell your difference, co-ops told
Next
Subscribe to the newsletter