By Miles Hadfield
Holly Bevington with the memorial to her father, Lee

A branch of Tamworth Co-op has helped create a unique wave-shaped memorial for an air hostess whose father’s life was cut short by illness.

Carved out of granite, it reflects the character and passions of Lee Bevington who loved the sea and travelling to faraway places.

The headstone includes a picture of a beach fringed by palm trees and an image of Mr Bevington, with his baseball cap turned round, at the centre of the sun radiating out over the water. Standing on the grave is a miniature statue of a footballer and at the foot the badge of Wolverhampton Wanderers. In his youth, the father-of-two was a striker for Tipton Town FC. Injury cut short his playing career, but he retained his love of the game and was a lifelong Wolves fan. 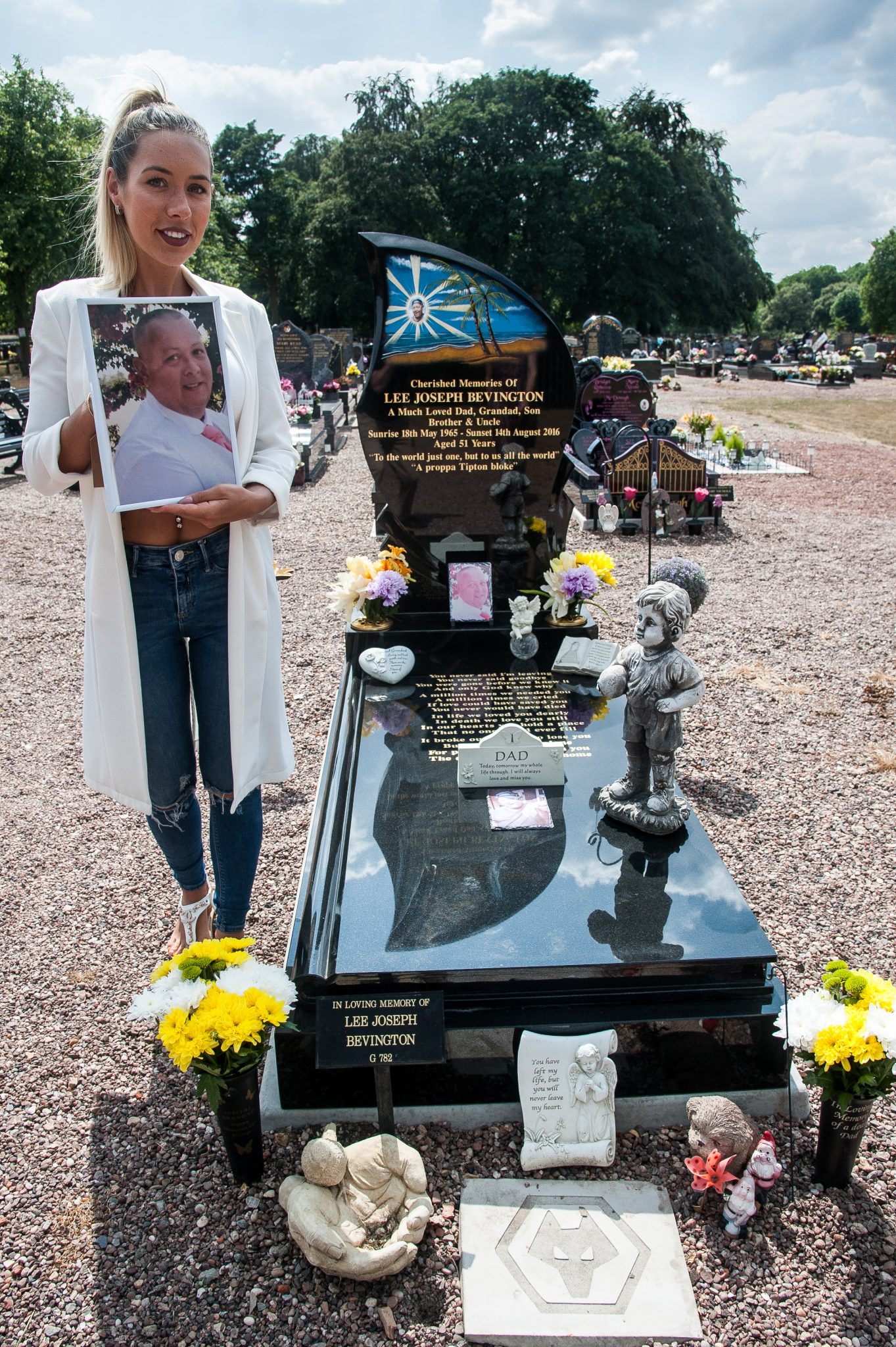 The Coseley office of Halliwell funeral directors, owned and operated by Tamworth Co-op, produced the tribute at Tipton Cemetery for Mr Bevington’s daughter Holly who came up the design. The £7,000 cost of the 6ft-tall memorial was raised by the family and from a collection at his funeral.

Lee, a former chemical processing manager, from Tipton was a diabetic and died aged 51 from liver failure.

His daughter, a British Airways air stewardess, was determined he would never be forgotten. Describing him as a ‘sociable, cheeky chappy,’ she said: “He really stood out in life and now he stands out in the cemetery too. This is where I know my happy place is with him and I wanted to put his personality into his memorial.

“He loved travel. As a child we were always holidaying abroad. He used to enjoy listening to the sea and the sun always seemed to shine out of him.

“I cried when it was put up. It was better than I ever could have imagined. Now it makes me smile when I visit it. Every time I go there the sun seems to shine down.”

Yvonne Harper, a funeral director at Coseley Halliwell, said: “We had to wait for the ground to settle before we could put up the memorial. Holly drew the picture herself and it was then painted by hand onto the stone. She also chose the verses. It took several months to complete because of all the different elements to it. We’re so pleased to have been able to assist her in creating this wonderful tribute to her father.”

Holly, 30, from Coseley, added: “It took a lot of explaining what I wanted, but Yvonne was absolutely brilliant. She is so caring and thoughtful and made it easy for me.”