The store in Oswestry, Shropshire, puts its longevity down to the flexibility of its worker co-op model

Honeysuckle, a wholefoods co-op store in Oswestry, Shropshire, is celebrating its 40th anniversary.

The store, which sells a wide variety of ethical, healthy foods including fresh fruit and veg, herbs, dried, packet and tinned foods, is holding a week celebrations to mark the milestone, with bunting, cake, special chocolate from Forever Cacao and lots of funny photos from over the decade.

It’s an impressive feat which has seen the store – set up in July 1978 by four friends – maintain a presence on the same site while holding up its ethics and standards.

Member-worker Gemma Syrett-Judd says the group chose the worker co-op model “because of their political motivation, they didn’t want to be in a conventional business, they wanted to be a co-op”.

She added: “Also it gave them flexibility – they were young with families and it fitted in with what they wanted to do, it allowed them to have flexible hours to fit in with their family life.”

The worker co-op model is also a crucial factor in the shop’s longevity, thinks Gemma.

“It was set up with the basic principles of the worker co-op and looking back, that has allowed the shop to survive,” she told Co-op News. “We feel that it wouldn’t be here if it was a conventional business partnership – it would probably have been bought out.

“And because we’re a worker co-op we have a wide spread of expertise in the organisation – one person joins and they’re good at accounts, someone else is good at stocktaking, and so on.”

Honeysuckle has enjoyed the security of having the same premises for its entire lifespan. “The landlord has been very good to us,” said Gemma, “which means we have security. And if things do get tough our emphasis is always on protecting the core, on keeping the shop open – the worker co-op model gives us that flexibility, we can choose to take a pay cut or work fewer hours, although that’s not something we generally have to do.”

However, it has recently undergone changes of membership after many years of stability, as some of the original members reach retirement. Currently, it has three members and is looking to recruit a fourth.

“That’s good,” said Gemma, ‘because it means we can bring in younger people – they are enthusiastic and more aware of new trends. The replacement of members over time naturally brings in new blood, new energy, new ideas. Again, flexibility is the key word.

“We know our customers – some have been with us for 40 years and it makes you realise how impressive it is that we’ve been here that long. People who have always supported us have told us what Honeysuckle means to them. When the shop started, wholefoods stores were rare so for people with those diets and ideals, we were very good.

“Now those ideas are mainstream it brings challenges because you realise what you sell is available everywhere – but our knowledge and customer service is not everywhere. And we have more flexibility than big stores where if something doesn’t sell in six weeks they dump it. We can restock quickly if people want something.” 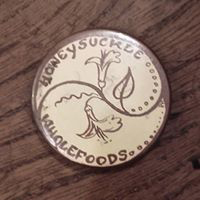 Because Honeysuckle has last so long in the same place, it has become something of a fixture in its community, which means it has become more than just a shop but also performs a social role.

“A lot of our customers are at a certain age now,” said Gemma, “and if they stop coming in, you miss them, so we check up on them, and check if they need anything. It’s part of our ethos, of caring for people in our community.”

This in turn brings a loyalty from customers which helps Honeysuckle weather the more difficult times.

“The Brexit vote had an instant dramatic effect in the town, all the shops went quiet but people’s confidence has recovered,” said Gemma. “With the currency going up and down, you notice the change in the exchange rate immediately when your food is imported – like our veg is out of season – and unlike the supermarkets it’s hard or us to absorb the cost.

“But a lot of our customers appreciate that fact, they can see what’s going on.”

A despite such bumps in the road, Gemma says she is “very optimistic about Honeysuckle’s future” and the co-op hopes to make changes to the store so it can increase its stock.

Gemma added: “We have outgrown the shop – I’m amazed how much we cram in to it. We are exploring options of expanding internally, in our current building; that depends on our landlord and our finances. We are not looking to relocate.

“We’re not profit-driven – it’s a matter of working to keep the job; everyone who works here is hands-on with it, it’s very close run.”

And she says Honeysuckle will continue to guard its ethics. For instance, when Ecover, the maker of eco-friendly cleaning products, was bought out by a multinational the co-op stopped stocking it.

“One of our customers, at first, bought all our remaining stock,” said Gemma. “But later they came back and said they’d thought about it and was glad that we’d had the knowledge; people don’t have the time to scour the internet to keep up with all the changes.”

She added: “With plastics we’re going back to good in jars and open sacks, we’re trying to eliminate waste. We brought in a brand of instant pot meals in a bamboo cup but when you looked inside all the individual ingredients were wrapped in plastic so we sent them back.”

But the store does take these decisions on a case-by-case basis. “When Rachel’s Organic Yoghurts was bought out, we thought hard about it and decided to carry on stocking it, because if everyone stopped stocking them the small Welsh organic farmers who depend on the business would be affected.”