How can co-ops reconcile their planning needs with concern for the community?

The needs of co-op businesses can bring them into disagreement with their communities – so how should they move forward while maintaining their values and principles?

By Susan Press and Rebecca Harvey
The Haden Cross pub in Sandwell, where plans to build a new co-op on the car park were initially rejected

The Co-op Group has recently been at the centre of several controversies involving sites where communities opposed plans to build retail outlets or housing.

In 2015 Dudley Council refused planning permission for two stores proposed on pub sites following a widespread protest. The plans were rejected due to lack of parking provision and possible adverse effects on business.

In Sandwell, plans to build a new co-op on the car park of the Haden Cross pub were also rejected.  Friends Of Haden Cross group was formed and more than 550 people signed a petition to ‘save the pub’. In Essex, controversy continues over plans to build a co-op retail store in the beer garden and car park of the Eagle pub in the village of Galleywood with an ongoing campaign as Chelmsford Council considers the proposal.

Whatever the specifics of each case they all face challenges in how co-operatives engage with communities. Is the priority to engage just co-op members or the people who actually live where the buildings are proposed?

The question applies not just to the retail sector but the increasing number of housing and other projects in which co-ops are involved. In Bedfordshire, a fresh application for four properties in Wrestlingworth has been submitted by the Group following a rejected bid for 30 houses two years ago.

The original application was strongly opposed locally and refused by Central Bedfordshire Council on the grounds it “would cause harm to the character and appearance of the area by extending built development into the countryside”. 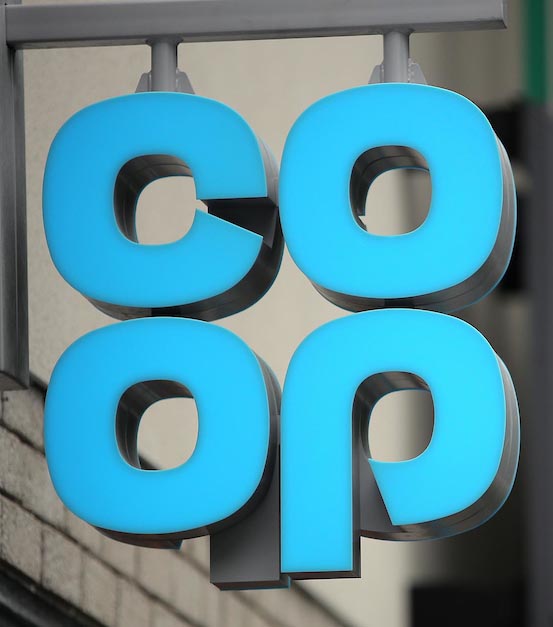 The Group has already taken steps towards wider engagement – in December 2015 it became the first major retailer to commit to protecting community locals by joining with CAMRA – the Campaign For Real Ale – to develop a set of principles for convenience store developments on pub sites.

“Where we have opened new stores on surplus land next to pubs it is often the case pub owners invest in the property, safeguarding it as a community asset and ensuring it is well-placed to benefit from a new neighbouring store. It is our experience that the store and pub work really well together as a new community hub, reinvigorating the area.”

The Group isn’t the only society to meet opposition from sections of the local community for issues around planning.

At Coleford in Gloucestershire, for example, the Forest Of Dean council had to pay £35,000 in legal costs after the Midcounties Co-operative successfully challenged a decision to permit a rival Aldi outlet on undeveloped land.

High Court judge Mr Justice Singh made the ruling in August after telling the council it had failed to fully address the retail impact of a new store – leading to residents setting up a ‘We Want Aldi’ Facebook page, with some threatening to boycott the Midcounties store.

And in Rugby, Heart of England leased a stretch of land to the council as a recreational area; after the lease expired in 2015, the society applied for planning permission to build 50 houses on what had become known as Oakfield Recreation ground.

In March 2016 permission was refused. According to the council, the co-op then fenced off the land and refused to enter discussions on a new long-term lease, instead of launching an appeal against the decision, causing consternation among local dog walkers, joggers and Sunday League footballers.

The appeal was withdrawn in April 2017 and this summer Rugby Borough Council submitted a formal offer to Heart of England to buy Oakfield Recreation Ground – now listed as an asset of community value following a successful application submitted by the Save Oakfield Rec group.

Midcounties and Heart of England were not available for comment at the time of publication.

In Desborough, Northamptonshire, Central England has appealed against a decision by Kettering Council to refuse an outline planning application for a residential development of up to 304 dwellings.

Andrew Buckley, head of property at Central England Co-operative, says the society “understands the complicated nature of the planning process and the need to balance the interests and needs of local communities”.

“We apply our co-operative values to the projects we are involved in and work to ensure a fair and balanced approach to the planning process as a whole,” he says. “In relation to Desborough there is a proven local need for more housing in the area. The society submitted an outline planning application in 2016 for the redevelopment of land owned jointly with two other landowners (including the local council).”

The application also incorporates public space, nature areas and surface water management measures.  The plans would provide at least 30% affordable homes and these would be a mixture of rented and shared ownership.

“A public inquiry is due to be held at the end of October and while the society is aware that there has been some local opposition to the proposal, we believe that the proposal presents an opportunity to create an attractive built edge to the southern boundary of Desborough and will provide a development which will be both respectful of the local character of the area and sympathetic to its surroundings,” adds Mr Buckley.

The need for community engagement

David Rodgers is an expert member of the International Co-operative Alliance’s Principles Committee and was interpretive editor of the Guidance Notes to the Co-operative Principles published by the Alliance in November 2015.

In his view, meaningful engagement with the wider community is key to resolving conflict and achieving positive outcomes.

“Communities object to development when development is seen as being imposed on them and impacting adversely,” he says.

“These impacts may be numerous and diverse, such as disruption caused by construction, noise and inconvenience of heavy traffic, additional strain on local services such as schools and GP services, loss of green space, poor design and impact on visual amenity and provision of homes that are not affordable to the local community.”

Mr Rodgers sees a clear distinction between the private sector and co-operative approaches to development.

“Most private sector developers and indeed most housing associations and councils will make some attempt to consult with a local community to minimise objections to save time, cost and risk in securing planning consent,” he says.

“However, they will ultimately rely on their knowledge of the planning framework and their ability ultimately to secure consent on appeal if they are confident their development complies with the LDF and they have agreed on terms for a section 106 agreement – which includes the provision of some affordable housing – in advance with a local authority planning officer.”

In these cases most consultation efforts are tokenistic, says Mr Rodgers, and plans will only be modified to take account of objections if this does not affect the developer’s bottom-line profit from the development. In contrast, the co-operative principles, particularly Principle 7 (concern for community), require a co-operative proposing development to take a significantly different approach to that of a private sector developer.

“Principle 7 requires co-operatives to measure ‘value’ in a different way by having concern for the wider ‘value’, not measured in money terms, for the sustainable development of communities in which they operate,” he says.

The Alliance’s guidance note to Principle 7 explains the concept of ‘sustainable development’ which emerged from the United Nation’s World Commission on Environment and Development 1987 report ‘Our Common Future’. It was incorporated into the additional Concern for Community Principle 7 in the 1995 reformulation of the Principles by the Alliance.

“It is a principle that commits co-operatives to ensure all their business activities – including any housing development – are undertaken with concern for the sustainable economic, social and environmental development of communities,” says Mr Rodgers. “That requires a co-operative not only to propose a development that is narrowly beneficial for the co-operative and its members, but which is one that meets this wider ‘concern for community’ principle”.

The approach he would expect a co-operative to take is one of positive community development and engagement that starts early in the design and planning process – as in the Central England example in Desborough.

This requires “positive transparent engagement” with the local community about both the proposal and the development of planning application designs, he explains. This can come through proper consultation with representatives from existing community organisations, where they exist, or through setting up a representative consultative group if necessary.  This would look at all the impacts of a proposed development and all realistic and appropriate ways of mitigating adverse impacts. The aim should be to ensure through this engagement that the community ultimately supports rather than objects to a proposal.

“This approach may not satisfy devoted NIMBYs but it should ensure Principle 7 is complied with even if all objections are not overcome,” adds Mr Rodgers.

“Given the high demand for affordable housing in most areas, I would expect such an approach to produce a higher percentage of homes that are genuinely affordable for a local community than the minimum percentages required – and for those to be owned or managed by a local housing co-operative or community land trust which the developer co-operative would help to establish.”

He would also expect the planning and community consultation process to look at the wider economic and environmental impact and to achieve higher environmental design and build standards than a private sector developer. If done effectively it can lead to a development that produces the same or better overall value for money for the developer co-operative when compared with the more usual private sector approach.

“The co-op should take a very different approach – not just maximise value but recognise that value can be measured in other ways.”

Mr Rodgers cites the Freiburg Charter – which has 12 principles of sustainable urbanism – as an exemplar of how co-ops can comply with the 7th principle when developing surplus land assets.

“The local authority took a different approach with a substantial site for 300 units,” he says.

“They had a community development approach which reserved some units for self-build, some of which were small-scale. They held a design competition to make sure the development was attractive and environmentally sound with some units reserved for co-op housing. The Freiburg charter for sustainable development which emerged from that is, in my view, an example of how you get the very best value from land and this pays dividends because people become engaged.

“This is not just about disposing of your surplus land and assets – that’s not the co-operative way.”

Malawi: Supporting co-op development in the Warm Heart of Africa
Next
Subscribe to the newsletter