Barbara Dure, who was the final president – bar one meeting – of the Plymouth and South-West Co-operative Society, has died aged 92.

Born Barbara Campbell in Keyham, Plymouth in May 1925, she was the youngest of three children. Her father, a dockyard worker, died from a rugby injury and the family circumstances became rather straitened, as her mother raised them alone.

But her mother was also politically active and, alongside her regular schooling, Barbara began attending classes run by the Co-op Education Committee. At some point in the 1930s she shared a table with Aneurin Bevan and his wife Jennie Lee at a Labour/Co-op function, which made a great impression on her.

Around half a century later, she was to share a platform with another Labour firebrand, Ken Livingstone, who she did not hold in quite the same esteem.

Leaving school at 14, Barbara obtained employment with the Plymouth Co-op, firstly in grocery and then, after passing society exams, becoming a saleslady in non-food, at the society’s magnificent department store in Plymouth city centre.

We have clues to her youthful character as she became a shop steward for NUDAW (forerunner of USDAW) and – as she recalled to me – was crowned Miss Co-op Queen in a beauty contest: it was a very different age. She retained her love of a certain flamboyance – partying, glamour and showmanship, with a lifelong passion for music and ballroom dancing. Barbara plainly needed no lessons from modern feminists in assertiveness or the need to find what fun there may have been in war-ravaged Plymouth: her own street, Townshend Avenue, suffering particularly badly, being so close to the dockyard.

She left employment in 1950, upon her marriage to Jack Dure, and RAF technician who served with Air Sea Rescue at the Mt Wise base in Plymouth. A daughter, Susan, was born; and as her own mother had done, Barbara combined parenthood with a growing role in the Co-op Women’s Guild, Labour and Co-operative parties and the Progressive Co-operators Association. The latter was a body established before the war by socialists to challenge the dominant force in the Plymouth Co-operative Society – the Blue Tickets (Tories) led by the redoubtable Lady Astor.

In 1963 she was elected to the society’s education committee, which managed staff training and the education of active shareholders in co-operative ethics and values. This was a cause she pursued as governor of Morice Town Primary for some 30 years.

In 1978, she secured election to the board of directors, governing what was then a big cash and asset-rich organisation, one of the most profitable in the co-op movement.

Barbara appears to have had little trouble in mastering the male-dominated, labyrinthine world of co-op management, becoming a director of the enormous Co-operative Wholesale Society and chair of its property services committee. Other posts included directorships of national shoe chain Shoefayre and the central executive of the Co-operative Union, the umbrella body of the whole movement. And in 2004 she became only the second woman president of the Plymouth board of directors in 150 years.

Her presidency, I think, was not the happiest period of her service. While she enjoyed, with her old zest, the ceremonial side of the office, the boardroom we shared by then was becoming very tense and her old certainties were not to stand her in their former good stead. The society was servicing very heavy borrowings, had a large pension fund deficit and had sold and leased back much of its great property portfolio to withstand ever more intense competition.

The board debates became very heated at time and she had to display a steelier side to her character – threatening to throw me off the board at least once! She bitterly disliked the inevitable merger with the Co-operative Group and decided to retire in 2009, having won a final accolade, the National Award for Co-operative Excellence, the same year.

Her last years were blighted by Alzheimer’s disease and she passed away in May, survived by her daughter. 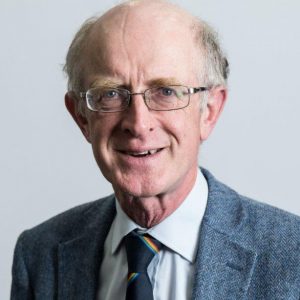 Andrew is a former director, stocktaker, and pension fund trustee of Plymouth Co-op, a member of the National Progressive Federation and a Co-op Group members council representative for the south west.