The Hive supports 100 groups in its first year

The Hive business support programme, led by Co-operatives UK in partnership with the Co-operative Bank, has supported over 100 co-operatives organisations in its first year, through expert advice,...

The Hive business support programme, led by Co-operatives UK in partnership with the Co-operative Bank, has supported over 100 co-operatives organisations in its first year, through expert advice, training and resources – and has a further 150 in the pipeline for 2017.

“We are seeing more and more people deciding to just get on and do things themselves, rather than waiting for government or business to do it for them,” said Ed Mayo, secretary general of Co-operatives UK, “but crucially, rather than going it alone they are forming co-ops and doing it together. We are seeing a new wave of inspiring organisations that are owned and run by local people.

“The Hive is the only programme of its kind that is helping people discover whether a co-op is right for them, supporting new co-op start-ups and advising existing ones. It’s a fantastic opportunity, perfect for anyone with an idea they want to make happen.” 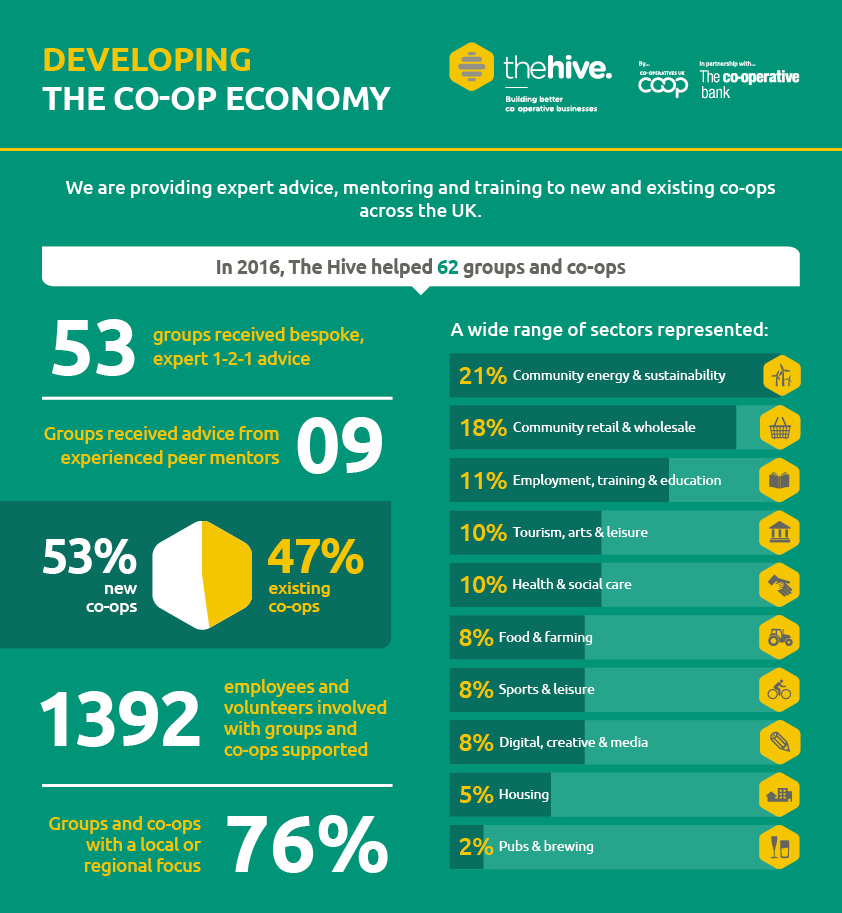 One of those organisations helped through the scheme is Tea in the Pot, a support service run for women by women in Glasgow, which is being assisted in becoming a co-op with a plan for commercial sustainability so that it can formalise its approach and offer its vital services in the long-term. In Bristol, staff at Harcourt Pre-school are being supported in buying the business themselves and running it as a worker co-op after the owners decided to sell up, putting the service and jobs at risk.

Another is the Leeds Bread Co-op, a worker owned artisan bakery which has been working with TheHive to ensure to put in place its expansion plans.

“I didn’t think I’d ever own my own business,” said Zig, one of the co-owner of Leeds Bread Co-op. “There was so much support when we started out. It is eminently possible if you really are motivated. It’s hard work but it’s very rewarding.

“The one thing that blows me away is that there was nothing there to start with. It was a chance encounter and conversation. And so many years later you have generated, from absolutely nothing, livelihoods for 16 people, a product that we’re all proud of, and that didn’t exist in 2012.”

Matthew Carter, products and communications director at the Co-operative Bank, believes the fact that the Hive has already helped over 100 organisations since its launch, has “helped boost an important part of the economy”.

“The Hive helps guide people through the process of starting a co-operatively run business, assists those looking to convert to a co-operative, and helps existing co-ops grow,” he said.

“Supporting co-operative values and ethics in the UK is a key part of the Co-operative Bank’s  Ethical Policy commitment. This partnership brings our commitment to life by providing funding over three years in order to provide resources and expertise to help existing and new co-operatives grow and flourish.”