Nine ways in which credit unions are different

Credit unions from across the world are celebrating the International Credit Union Day today. The day was designed to highlight the movement’s long history and achievements. Marked every...

Credit unions from across the world are celebrating the International Credit Union Day today. The day was designed to highlight the movement’s long history and achievements.

Marked every year on the third Thursday of October, the ICU Day was inspired by the Credit Union Day, launched in 1948 by CUNA, the USA’s Credit Union National Association. In 1971 the World Council of Credit Unions (WOCCU) was established and the same year the umbrella body created the first ICU Day materials that were used around the world.

This year the theme of the ICU Day is Authentic Difference. Worldwide, there are over 57,000 credit unions across 105 countries, service 217m members. But how are these credit unions different?

Credit unions operate in accordance with the same principle of one member, one vote as co-operatives. This means that members each have one vote in board elections, regardless of their amount of savings or shares in the credit union.

Credit union membership is based on a common bond such as a sector or a geographic area. Savers and borrowers can belong to a specific community, organisation, religion or place of employment. Membership in a credit union is voluntary and open to all within the accepted common bond of association that can make use of its services and are willing to accept the corresponding responsibilities. 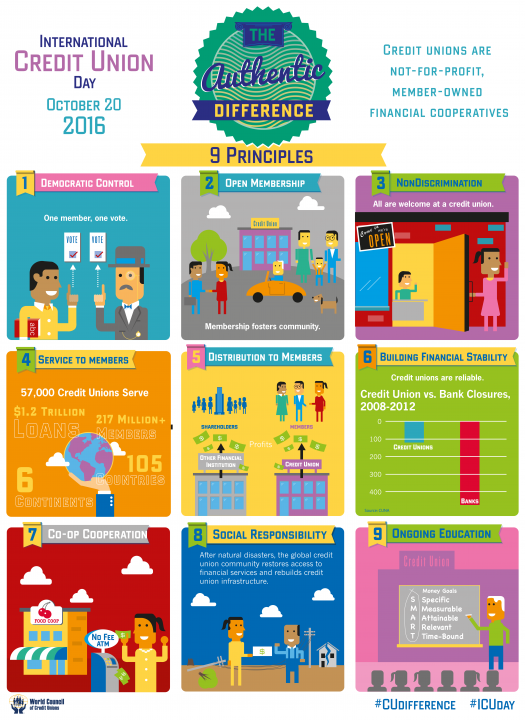 Credit unions are non-discriminatory on all grounds, including but not limited to race, orientation, nationality, sex, religion and politics.

Just like other co-operatives, credit unions are member-focused, meaning that the work to benefit their members and improve their economic and social well-being.

Depending on their capability, credit unions pay a rate of interest on savings and deposits. The profit resulting from the operations after covering costs is redistributed to members either directly in proportion to their transactions with the credit union, as dividends on shares or indirectly by providing improved or additional services required.

Another key concern for credit unions is to build financial strength, including adequate reserves and internal controls to ensure continued service to membership.

Co-operation with other credit unions or co-operatives from other sectors is also one of the founding principles for credit unions. In the USA, CO-OP Financial Services, a credit union network supporting their members, is offering ATM, card payment and mobile services. The CO-OP network includes 3,000 cash points across the country.

Credit unions also have a social dimension. Their vision of social justice extends both to the individual members and to local community.

Education around co-operation and financial literacy is an ongoing aim of credit unions. By teaching people how to use and save money wisely, credit unions help individuals and communities avoid debt.

Is the collaborative economy an opportunity for co-operatives?
Next
Subscribe to the newsletter