The largest 300 co-operatives and mutuals in the world had a combined turnover of USD $2.53tn in 2014. This represents an increase of 7.20% from the previous year.

The figure was revealed in the latest World Co-operative Monitor, which was presented at the International Summit of Cooperatives in Quebec. Now in its 5th year, the monitor remains the only project of its kind, collecting and analysing data on the world’s largest co-operative and mutual organisations and non-co-operative enterprises controlled by co-operatives.

The 2016 World Co-operative Monitor is produced in partnership by the International Co-operative Alliance and the European Research Institute on Cooperative and Social Enterprises (Euricse).

Presenting the results of the study, Gianluca Salvatori, chief executive of Euricse, said: “We need the capability to tell the story of co-operatives in an emotional way. The emotion must be based on something hard. Since 2012, we have been creating this base data in order to understand how the co-operative movement is moving. If we had in those six years a change in volume, from $1.9trn to $2.5trn in the first 300 co-ops, then there must be a reason. We have seen this growth in difficult times.”

Charles Gould, director general of the Alliance, added: “The World Co-operative Monitor is now in its fifth year. There is no more appropriate way to celebrate this, than the 7% growth figure which we are proudly to announcing this year, and there is no better time than now, during the 2016 International Summit of Co-operatives.

“There is a growing interest for co-operatives worldwide, and we need to respond to this interest with adequate promotion of our model. The Monitor, as the leading data source on the world’s largest co-operatives and mutuals, is a central instrument for awareness raising, policy-making, advocacy and research.”

The Monitor refers to data from 2014, which was collected from various sources such as national rankings, sector rankings, existing databases containing financial data and annual reports.

In addition, 146 questionnaires were completed by organisations in 39 countries, including individual co-operatives and co-operative federal bodies. 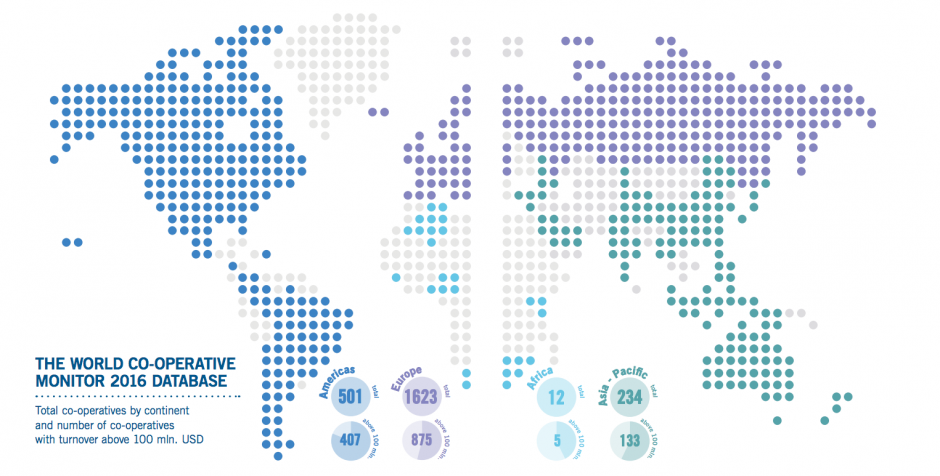 This year’s edition of the Monitor also includes a chapter focused on co-operative capital, which looks at the capital structure of the world’s largest co-ops. The Monitor’s analysis of co-operative capital shows that large co-ops and mutuals are not restricted by their nature in access to capital, and may do even better in this regard than non-co-operative enterprises.

“A very traditional theory says co-ops have difficulty accessing capital,” said Mr Salvatori. “We went through 220 data sheets from different co-ops and discovered the largest co-ops have good capitalisation – as good as shareholder companies. They have sufficient profitability to support their own growth, their own business.

“It’s true that their way to access capital is different, and more based on internal resources, but they have excellent robustness.”

How should co-operative banks deal with the negative rates dilemma?
Previous

Fair Tax and study days at Unicorn workers co-op
Next