Brighton Energy Cooperative has announced plans to implement the UK’s first solar-powered electric buses in the town and asked for votes to support the project. The organisation is...

Brighton Energy Cooperative has announced plans to implement the UK’s first solar-powered electric buses in the town and asked for votes to support the project.

The organisation is working in partnership with the Big Lemon bus company to cover the roof of the bus depot in Whitehawk in Brighton with around 120 solar panels. This will generate 30kWh of electricity – the equivalent of 1.8 million kettle boils – which is enough to run two buses every day.

Solar power derived from the panels would be stored in a battery. When the buses return from their daily rounds, they plug in at the depot and charge overnight.

For the last eight years, the Big Lemon bus company has been fuelling its buses on waste cooking oil – processed into biodiesel – from local restaurants. They now want to power them on green renewable electricity, with no emissions. 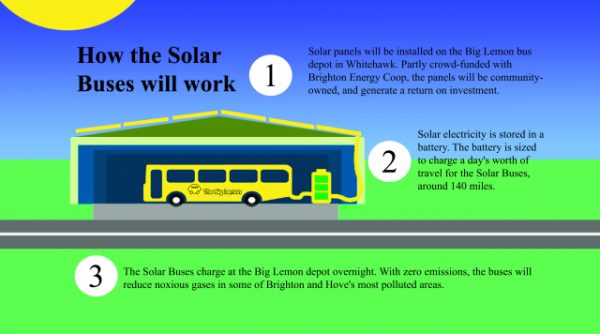 Brighton Energy Coop has applied to the Marks and Spencer Community Energy fund to partially pay for this innovative scheme and urged supporters to vote.

“This is the first project of its kind in the UK – a very exciting time for us and a project that puts Brighton & Hove at the forefront of renewable energy and transport in the UK,” said Will Cottrell, chair of the co-op.

The total cost of the installation will be £25,000, with the partnership hoping to raise half of that through crowd-funding and attract enough votes from members of the public to win £12,500 of funding from M&S Energy to cover the other half.